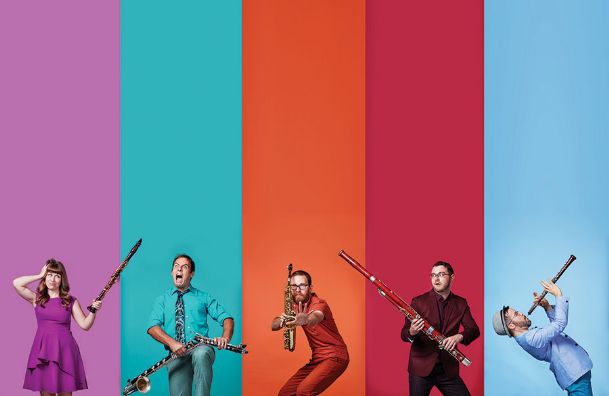 The Akropolis Reed Quintet will perform at 7 p.m. Tuesday in Lee Hall's Bettersworth Auditorium on the Mississippi State campus. Photo by: Courtesy photo

The quintet will perform Tuesday, Sept. 17 at 7 p.m. in Lee Hall's Bettersworth Auditorium. Doors open approximately 30 minutes before the curtain rises on all fall and spring performances in the Lyceum Series, MSU's long-running performing arts program.

Billed as "America's premier reed quintet," the ensemble has been commended by Fanfare Magazine for its "imagination, infallible musicality and huge vitality." The group's style features dynamic melodies and tempo changes and showcases various instruments, such as bassoon and oboe. While original compositions make up a majority of the group's repertoire, classic pieces like Vivaldi's "La Folia" and Debussy's "Children's Corner" also are within its extensive skill set.

Akropolis's recent accolades include the 2014 Fischoff Gold Medal and the 2015 Fischoff Educator Award, among other national prizes for chamber music.

Founded at the University of Michigan in 2009, the quintet includes alumni from the Association of Performing Arts Professionals' prestigious Young Performer's Career Advancement Program. Akropolis has received grants from the National Endowment for the Arts, Michigan Council for Arts and Cultural Affairs, and Chamber Music America, among other organizations.

The group has released three studio albums, including "The Space Between Us," called "pure gold, shot through with tenderness and grace" by the San Francisco Chronicle. For more information, visit akropolisquintet.org.

For additional MSU Lyceum Series information, contact the Center for Student Activities at 662-325-2930, visit lyceum.msstate.edu or email [email protected] Contributions to the Lyceum Series can be made via the MSU Foundation by contacting Lynn Durr at 662-325-8918.