Going big: When the job gets big, Beauregard says 'I can do that' 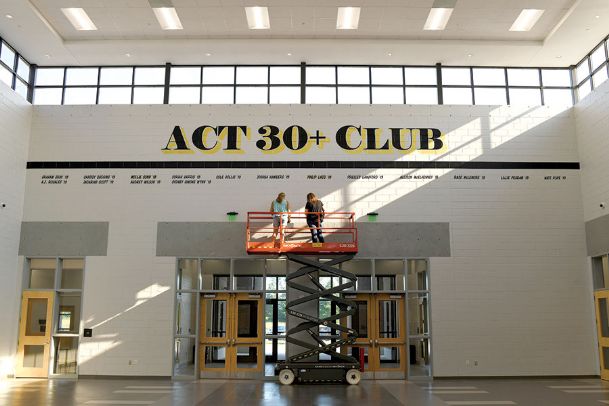 Corinne Beauregard, left, and Jeannie King, both of Columbus, stand atop a scissor lift at New Hope High School Wednesday to work on signage for the ACT 30+ Club. At the request of New Hope High Principal Matt Smith, Beauregard, with King, created the wall by painting 3-foot tall letters and adding names of students who scored 30 or better on the ACT in vinyl letters. With advancements in sign-making technology, Beauregard is one of a shrinking number of designers who still do traditional sign painting. Photo by: Jennifer Mosbrucker/Dispatch Staff 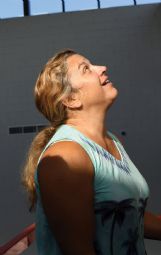 Corinne Beauregard, of One of a Kind Screenprinting/Graphic Design in Columbus, looks up at the ACT 30+ Club wall at New Hope High School Wednesday.
Photo by: Jennifer Mosbrucker/Dispatch Staff

Corinne Beauregard, left, and Jeannie King are pictured in front of a mural they painted at The Pet Nanny animal boarding facility in Steens.
Photo by: Courtesy photo

Corinne Beauregard, with Jeannie King, recently completed this signage with 8-foot letters on a business in Tupelo.
Photo by: Courtesy photo

With a practiced motion, Corinne Beauregard starts the quiet electric motor of the scissor lift. Slowly, the railed platform she's standing on rises into the air, the criss-cross metal supports underneath it expanding, sending her higher, higher. It's not a new sensation for Beauregard; she's spent a lot of time airborne these past several weeks. This time, it's at New Hope High School in Lowndes County, where the commercial sign painter and graphic designer has created an "ACT 30+ Club" wall in the commons area.

In an era when software, vinyl lettering and machines have made traditional sign painting a rarer craft, Beauregard still wields brushes when called on -- often at eyebrow-raising heights.

Sign painting is called "a dying art" in some circles. Beauregard, of One of a Kind Screenprinting/Graphic Design, has seen it change significantly since she started out a few decades ago. There were no computers then.

"There was nothing automatic about it," she said. "Now, there's not many sign painters; everything is done with vinyl."

Arch Pitts at Pitts Sign Co. in Starkville is a veteran of the industry and echoed that.

"Back years ago, when I started this business in 1969, there was no such things as computers," he said. "It was all with brushes. And today we don't own a brush."

Beauregard is not simply one of a dwindling number of traditional sign painters, she's a female sign painter -- scarcer still.

"I don't know any other female -- any other person here, as a matter of fact -- (doing this)," said nine-year New Hope High School Principal Matt Smith, who commissioned the ACT wall. "But Corinne said, 'I can do that.' And I could not be more tickled with it. Trust me, it's created a buzz with our student body."

Beauregard remarked, "I'd been doing smaller things at New Hope, including a series of basketball championship signs the principal wanted brightened up for the new gym. Then he was asking about the ACT wall and if it was something I could do. I said, 'Absolutely! I ain't scared,'" she laughed, the "ain't" for emphasis.

Beauregard's high-flying work is visible elsewhere, like a recent job in Tupelo where she and frequent collaborator Jeannie King painted "DELI" on a business -- in 8-foot tall letters.

All this "big-and-tall" work started several years ago when Columbus attorney Gawyn Mitchell wondered if advertising could be painted high on the building housing his downtown practice.

Beauregard recalled, "I was excited and said, 'We can do that."

The scissor lift for that one put the sign painter and King about 30 feet in the air to paint prominent letters measuring 3- to 4-feet tall. The higher the lift, the more movement is felt at the top.

"The starting point is the worst; once you get into what you're doing, it's alright, but it's not like standing on the ground," Beauregard said.

Sign painting as a craft has a long and storied past. Historically, artisans acquired their skills through apprenticeships, which could last for years. Beauregard's artistry showed early in creating faux finishes on floors. She also earned, as did King, a degree with emphasis in graphic design at Mississippi University for Women. She's honed her skills working at Mid-South Signs and with Joe Dillon's former sign business. She is now with her family's One of a Kind shop, where she is often busy with screenprinting, vinyl and decals. But there's something about the challenges of painting the big ones. One of the most significant is physically getting the sign pattern up on the wall. Paper patterns with small holes designating letters are pieced together from smaller segments and attached to the surface to be painted.

"I don't know how any one person could put it up alone," Beauregard said.

Then, bags filled baby powder or chalk are pounded on the pattern, outlining letters through the holes. On large-scale jobs, that's a lot of pounding, said King of the task sometimes done anywhere from 10 to 30 feet above the ground.

Looking ahead, though, Beauregard figures scissor lifts and ladders will remain in her future.

"As long as what I'm standing on isn't moving around more than I am, I'm OK," she laughed.