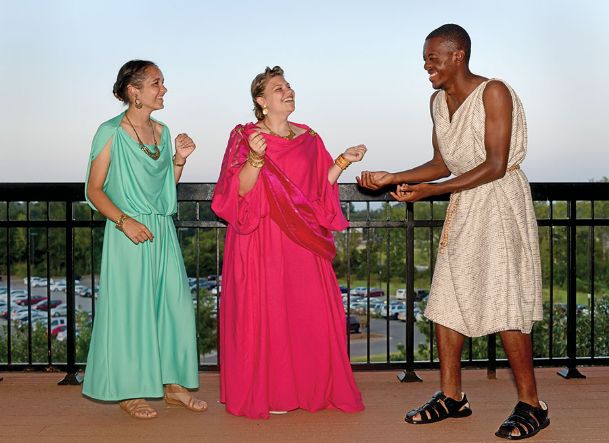 In "The Braggart Soldier," an ancient comedy by Plautus, a young Athenian man named Pleusicles must journey afar in a story that reveals a true hero in an unexpected character. First performed in Rome in 206 B.C., the play has been adapted specifically for Mississippi State's Judy and Bobby Shackouls Honors College Classical Week.

Free public performances will be Tuesday and Wednesday, Sept. 24-25, at 6 p.m. in the Griffis Hall Courtyard at Zacharias Village on the MSU campus.

The play's director is Donna Clevinger, professor of communication and honors college senior fellow. Philip Freeman of Pepperdine University's Seaver College adapted the script translations specifically for Classical Week performers. All the actors are honors college students. Everyone attending is encouraged to bring a chair or blanket, as well as a picnic, if desired. In case of rain, the play will move inside Griffis Hall.

"There's nothing like an evening here at Mississippi State, to sit on the grass in Zacharias Village and watch a play and share that communal experience together," Clevinger said, adding, "We look to the past to find out who we are today."

While the play dates back more than 2,000 years, its scenarios and innuendos can be easily understood in modern time, said MSU student actor Joseph Rutherford of New Albany. He portrays Palaestrio in the production.

"I feel as if classical plays should still be a major factor in education today," he said, noting that the works continue to be relevant. "It leaves me in disbelief of how the plots for these plays were even thought of then and how they continue to be played and studied today."

"We never stop laughing," she said of the production. "The contemporary re-telling of this intricately woven comedy not only delights fans of classical theater but also allows modern audiences to partake in a story that will have them rolling from the cast's first entrance to curtain call."

Clever word play, an outlandish circus of characters, quick-witted jokes and the timelessness of the story translate brilliantly from ancient Rome to the 21st century, Moore added.

Clevinger noted that thanks a Bridge Initiative Grant, costumes were funded in whole or part by the Classical Association of the Middle West and South Committee for the promotion of Latin.

A Classics Everywhere Initiative program from the Society for Classical Studies awarded funds to defray costs of production.

Art designs were created by students from Starkville Academy and Starkville High School.

In addition, an exhibition of Greek and Roman artifacts curated by the Department of Art Galleries and the Lois Dowdle Cobb Museum of Archaeology at MSU includes 16 pieces that tie into the theatrical performance. The free exhibit is in the Brock Gallery on the main floor of Old Main Academic Center through Oct. 9.

■ WHAT: "The Braggart Soldier," a Roman comedy

■ ADMISSION: Free (bring lawn chairs or blankets for seating, and picnic, if desired)