In the garden with Felder: Some obvious, and not so obvious, ways to boost beauty 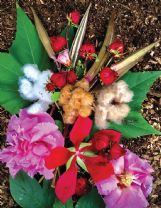 Who needs tropical hibiscus, when we have so many easier and sometimes edible relatives for our gardens?

Across the state right now a fig tree-size bushy perennial called confederate rose is in full sway, loaded with its autumnal show of huge double pink pompoms. Also known as cotton leaf mallow, it is unbelievably easy to root; I just stick foot-long, finger-diameter cuttings in a bottle with three or four inches of water, and plant in the spring.

But there are lots of others. Roadside ditches are brimming with native hibiscus, including the large-flowered marsh mallows with white or pink flowers, and scarlet rose mallow, sometimes called swamp hibiscus or Texas star hibiscus. Its large deeply divided flowers are iridescent scarlet. (Note: This old long-haired guy has had police about it in my garden, because its leaves look so much like marijuana.)

Perhaps the most commonly grown garden hibiscus is the hardy shrub called rose of Sharon or Althaea, with summer flowers of pink, white, lavender, or blue; the old-garden antique tolerates extreme drought, heat and cold, and is a contender for replacing crape myrtles when bark scale makes the latter untenable as garden mainstays.

But my favorite mallow of all is, believe it or not, okra, which I use as an ornamental plant -- though different kinds have interesting pods, all with beautiful hibiscus flowers much loved by bees. My favorite is "Burgundy" with its deep reddish leaves and pods. I usually pinch the growing tip to make a bushier, more floriferous plant. All parts are edible, but I use pods in flower arrangements or paint 'em as holiday ornaments.

This year I grew another incredible edible okra relative called roselle. The stems of the big bush were crusted with hundreds of small pinkish flowers and thumb-size bright red fleshy pods which can be boiled and the tea mixed with sugar and lemon or other fruit into a refreshing drink called Jamaican sorrel. It also makes a delicious, tart jelly. The stunning ornamental plant grows very easily from okra-like seeds and thrives on total neglect and stops people in their tracks.

Last garden mallow I want to mention is a surprisingly easy annual cultivated in both the Old and New Worlds for thousands of years. Known far and wide as cotton, it makes dandy heat- and drought-loving garden plant. Not many folks grow it as an ornamental plant it, but it most certainly is, with its pretty leaves, beautiful yellow hibiscus flowers much loved by bees, and of course the seed pods which erupt in the fall with what was described in the 1300s as "tiny lambs on the ends of its branches."

Commercially, the once-prevalent pre-1900s Levant cotton native to Africa and the Middle East has been almost totally displaced by species native from Mexico to the northern parts of South America. But not all cotton is white. I have grown cotton plants with deep burgundy leaves and played with pale green and brown strains; the brown looks like white cotton that's been steeped in coffee. I hear it's illegal to grow colored cotton near commercial fields lest it cross-pollinate, but I doubt my little inner-city patch is a threat to Big Ag.

So, these are a few great mallows worth trying in next year's hot summer garden.