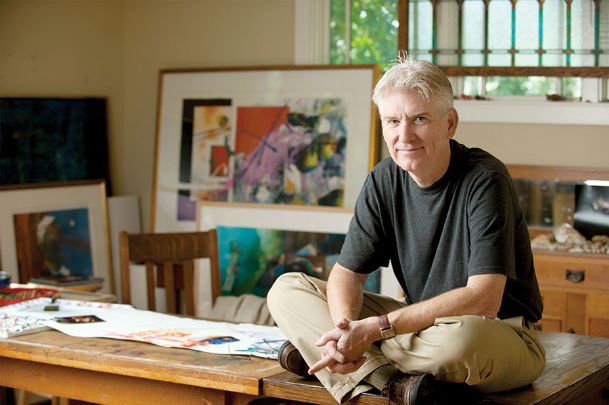 Mississippi State University Professor Emeritus of Art Brent Funderburk is pictured in his home studio in Starkville. Since retiring in May 2018, Funderburk has immersed himself in painting. Several of his watercolors â including from his latest series, "Re-inflorescence â A Second Flowering," have been selected for major art publications in 2019 and 2020. The William L. Giles Distinguished Professor often finds inspiration in the natural world surrounding the home he shares with his wife, Debby Funderburk, who teaches dance and dance history at MSU. Photo by: Photo by Megan Bean

Brent Funderburkâs "Inside/Outside" brings together a muse (wife Debby), a child's box of marbles, a Robert E. Lee statuette and the artist's colored pencils in a compelling composition.
Photo by: Image courtesy of Brent Funderburk 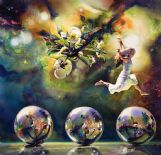 In Brent Funderburk's earlier painting "You Knew You Could," the artist brings human form to the canvas. Funderburk was named the official artist of the 2010 International Ballet Competition.
Photo by: Image courtesy of Brent Funderburk 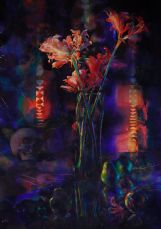 The first painting in Brent Funderburk's "Re-inflorescence â A Second Flowering" series, "Anteroom" represents the space between one life and another.
Photo by: Image courtesy of Brent Funderburk

"No one told me I couldn't do it," said Brent Funderburk. And so, he did.

Funderburk began decades ago honing his unique style of painting with watercolors, of interpreting with intensity, of teaching with passion. For 36 years at Mississippi State University, he inspired next generations of artists, gathering academic, teaching and research honors along the way. After retiring 18 months ago, the MSU Department of Art professor emeritus and William L. Giles Distinguished Professor could have slowed down, taken up fishing or golf, or even painting pictures of sailboats and beaches. Instead, Funderburk immersed himself in a "second flowering," one he might liken to the unexpected second blooming a pear tree in his yard put out in September. The pear trees and their fruit are Funderburk's old friends and collaborators, reoccurring in many of his paintings.

Retirement from teaching gave the artist the gift of time -- time to devote to creating a new series the Charlotte, North Carolina native titled "Re-inflorescence - a Second Flowering."

"I didn't want my golden years to be a kind of a middle place where everything is averaged out and I'm merely resting," he said. "I've always planned to paint full time and for it to be an exciting thing."

Excitement and introspection are frequent effects of Funderburk's canvases. With striking color and a mastery of light, the former head of the MSU Department of Art explores connections to the natural and deeper worlds. Several works are currently attracting widespread attention. "Soul House (Red)" and "Anteroom" have been jury-selected for the international publication Creative Quarterly: The Journal of Art and Design, out this month. In addition, Funderburk's "Angelus Vitae" and "Oaxaca" appear in the 2019 hardback volume "Splash 20: Creative Compositions." His "Soul House (Red)" and "Blood Moon" have been chosen for publication in "Splash 21: Capturing Mood" in 2020. Of 118 international artists whose work will be included, Funderburk is one of only 12 with two pieces selected.

"When I retired, the first painting I did in the (Re-inflorescence) series was 'Anteroom,' which represents that space between one life and another life," the artist explained. "It's about a second blooming." The painting speaks of beauty and reality. "There's a skull in the anteroom, because time is ticking off and mortality is in the room. But then, also in that room are these incredibly beautiful opportunities, so 'Anteroom' is about that, too."

"Soul House (Red)" captures a still moment of mysterious light and shadow in the artist's own surroundings. Autumnal glow plays over a pear branch while a bold red all but obscures the hint of the roof line of a small shed among the trees.

"It's so red it shocks me," Funderburk said. "Soul House," he shared on his website, embodies the artist's belief in the necessity of a quiet, still room of one's own, where one might find and be oneself, alone with the Maker.

"To me, the Soul House is about who you are, where you go inside yourself to be truly who you are," he told The Dispatch. "It's where I go to be with my creator. Often he's not there because I'm not in the right frame of mind, but at least it's a place to start, to get away from distraction."

Funderburk has traveled to teach, to paint. He taught in Europe and journeyed with students across the Gulf barrier islands, the Rocky Mountains and to Utah's Red Rock country. As stirring as the vistas are, he is reminded the best things in life are often right at home, where a pear tree, an old shed or a shaft of light can inspire.

"Nobody else is interested in these sad-looking trees or my shed but me, so they need me," he said. "The exotic mountains of the West and the beautiful landscapes don't need me ... when I come home, these subjects are quietly waiting to be realized."

It all says something about Mississippi, he believes.

While the artist's recent paintings reap recognition and talks are underway with galleries and museums about a possible new show, Funderburk stands, he said, on the shoulders of great people whose work inspires him. They include watercolorists Charles E. Burchfield, Walter Inglis Anderson and former teacher and mentor Edward Reep, "who did radical things with the medium."

"When I was teaching I was passing that legacy and thread on; now I'm trying to put it into the paintings," Funderburk said. The creative life, he added, is one of "high highs" and "low lows." "When you get into creative work, you fail a lot -- but when you succeed, it's ecstasy."

Sometimes it starts with an early morning cup of coffee at a window overlooking a familiar wooded scene.

"Some days I see the same old stuff ... and sometimes the things that were whispering are now yelling."