This bonsai hobbyist is big into the art of 'small' 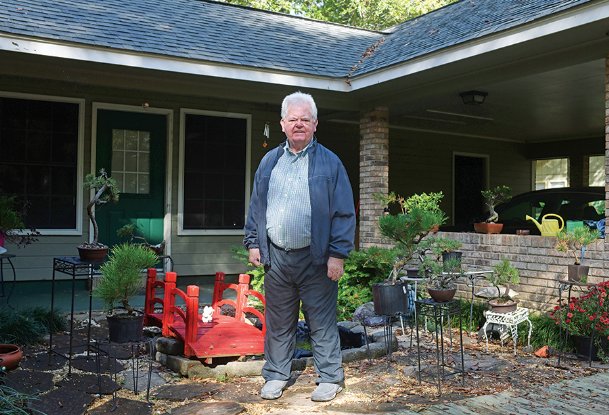 John Weathers of Columbus is pictured outside his west Lowndes County home Thursday with a few of the dozens of bonsai trees he has in various stages of development. Weathers took up bonsai seriously about 12 years ago after moving to Columbus from the Gulf Coast. Each tree requires years of patient pruning, repotting and shaping. Photo by: Jennifer Mosbrucker/Dispatch Staff

John Weathers holds a shimpaku juniper that is about 10 years old. It's one of the most popular conifer bonsai collected. "They are easy to wire and take to carving the wood to make it appear older than it is," the grower said.
Photo by: Jennifer Mosbrucker/Dispatch Staff 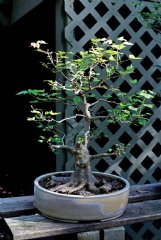 This trident maple, grown from a seedling, is one John Weathers acquired from a member of the Alabama Bonsai Society several years ago. "This type of tree is very easy to take care of," Weathers said.
Photo by: Jennifer Mosbrucker/Dispatch Staff

Careful pruning is required on a Japanese black pine to constrain the length of needles the tree produces.
Photo by: Jennifer Mosbrucker/Dispatch Staff

In a society that tends to champion "thinking big," John Weathers has instead found peace, patience and enjoyment in doing just the opposite. The Columbus man is a bonsai enthusiast. It should come as no surprise: He lived in Japan for 10 years, in Yokosuka, about 40 miles south of Tokyo. The demands of travel and work kept him from taking up the art of bonsai while in the island nation so well known for it, but he never forgot the intricate beauty of the trees he saw there.

It would be back in the States that the South Carolina native would rekindle his interest, first while living in Gulfport, where he took a couple of bonsai classes and started a tree.

"Katrina got it," he said matter-of-factly. But when a stepson began attending Mississippi University for Women in Columbus and Weathers came for a visit, he liked what he saw. That Columbus Air Force Base was here was an added draw; Weathers is retired Air Force Reserve.

After moving to a quiet wooded setting in western Lowndes County, he worked on his house for a while. Then he did some fishing. One day, though, he picked up a book on bonsai and other pastimes receded to the background. He was ready to get serious about this ancient art of cultivating trees to ornamental miniature scale.

The word bonsai is a Japanese expression that translates to "tray planting" or "planted in a container." With precision, care and pruning, the grower -- the designer -- trains a cutting, seedling or young plant to a desired appearance, striving to achieve the look of a mature tree growing in nature. The craft requires calm dedication and creativity to achieve the proportion, asymmetry and aesthetic desired.

"I really started this about 12 years ago after I moved here," Weathers said. "I started reading up on (bonsai) and took some workshops in Olive Branch. I joined the Alabama Bonsai Society and met other people that have the experience -- and that's really the way to learn. You can read so much, but you've got to get your hands dirty."

Moving among the 50 or so bonsai trees outside his home, Weathers pointed out boxwood, Japanese yew, magnolia, Hinoki cypress, azalea and many other trees or shrubs he is growing in the shallow bowls or pots traditional to bonsai. Here and there, he picked up dark, wet clumps from the base of a tree. What looked like clods of soil were actually degradable tea bags filled with organic fertilizer, a method of delivering time-released nourishment.

"You can bonsai just about anything, but some are better and look better than others," he noted. Japanese maple, boxwood, pomegranate and juniper are often among recommended trees to try.

A grouping of young pines in pots stood in front of Weathers house, near a garden water feature accented by a small red oriental-design bridge.

"These are my latest, all right here -- Japanese black pine," he said with a hint of anticipation and pride. "Just look at the wave and flow of that trunk," he praised, pointing to the curving line of one pine in particular he looks forward to working on.

One of his most treasured trees is a Trident maple currently displayed in the garden area behind his home.

"It's really interesting; it's 72 years old," Weathers said. Its provenance can be traced back through an Alabama Bonsai Society member who donated it to the club.

To make a tree look aged -- or at least mature -- is a goal for bonsai growers.

"You're trying to make it look old, through the way you wire it, the way you cut it and shape it," explained Weathers.

If well cared for, bonsai trees can be long-lived. A ficus bonsai at the Crespi Bonsai Museum in Italy is reported to be more than 1,000 years old. Several others worldwide are thought to be 500 to 800 years of age, according to bonsaiempire.com.

"There's all kinds of YouTube (videos) out there; it's amazing, hundreds of them covering all kinds of subjects about bonsai," he said. In addition, he recommends visiting bonsaiempire.com, reading books and articles, and seeking out a club, if possible.

"But eventually you need to get hands on," he said. One of his favorite ways is attending workshops at Brussel's Bonsai Nursery in Olive Branch as well as its annual Bonsai Rondezvous, a bonsai convention held every Memorial Day weekend. Bonsai hobbyists and experts from around the country convene for three days of instruction and demonstrations. The nursery also offers regular online courses.

Pre-bonsai kits are available for growers starting out; they contain a tree that has been partially trained but is still open to additional shaping and training.

"Once you have a tree though, it's kind of like the dog chasing the car -- you have to know what to do with it once you've got it," said Weathers.

Be prepared with perseverance. Bonsai projects evolve over years, not days or even weeks. But the rewards can be great.

"I didn't want to be a total couch potato when I retired, and it's a good stress reliever and it gets you outside," Weathers remarked. "And it kind of brought me back in some ways to my time in Japan; those years were some of the most enjoyable."

He does has one caution though: Be forewarned that one tree tends to lead to another and then another and another.

"But you get a sense of accomplishment because you grow these things, see them change over time," he said. "And you develop patience. One thing about bonsai, you can't grow one overnight."