A world of Christmas: Friends celebrate their bond with international flair 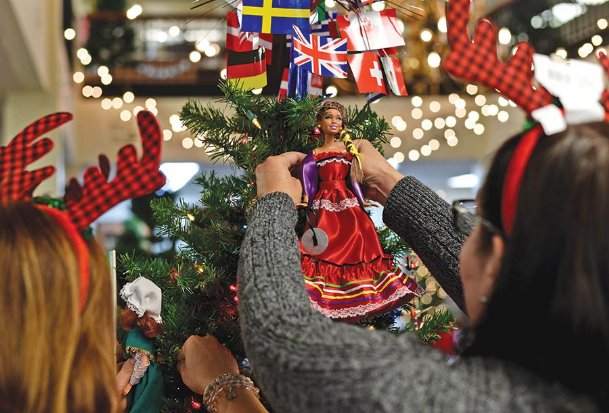 Beth Gillian, left, puts a doll representing Ireland on the Columbus Air Force Base International Spouses Group tree in the Columbus-Lowndes Public Library Monday. At right, Olga Almazam adds a doll representing Mexico. The group researched multiple countries to make traditional dress for more than three dozen dolls for the tree, part of the library's annual Festival of Trees. Twenty-three trees decorated by local organizations and businesses will be on display throughout the month. The public is invited to an open house from 4-6 p.m. Thursday, Dec. 12 at the library at 314 Seventh St. N. Photo by: Jennifer Mosbrucker/Dispatch Staff

Beth Gillian, left, and Tamami Sugo outfit dolls during a work session at Patricia Wilson's home. Costumes were made from materials left over from making Pilgrimage hostess gowns, which Wilson has done for several years.
Photo by: Courtesy photo 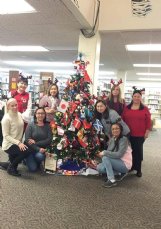 Members of the CAFB International Spouses Group pictured Dec. 2 at the Columbus-Lowndes Public Library are, at left in front, Karen Widner, originally from Australia, and Olga Almazam of Mexico. Behind them are Wendy Geduld of China and Beth Gillian from the Philippines. At right, in front, is Cristina Mercer of the Philippines and, behind her, Tamami Sugo of Japan. In back are Rosana Williams of Peru, left, and Patricia Wilson, originally from Mexico. Sigga Head, from Iceland, not pictured, also helped make costumes.
Photo by: Courtesy photo

A customary stillness at the Columbus-Lowndes Public Library gave way to some hustle and bustle Monday morning. Christmas was in the air. Throughout the stately building on Seventh Street North, volunteers from organizations and businesses that had "adopted" a tree and chosen a theme were busy decorating for the library's annual Festival of Trees. Nowhere was the task more cheerful than around a tree being decked out by eight ladies, all from countries other than the United States. The women belong to the Columbus Air Force Base International Spouses Group.

The idea of doing an "international tree" was proposed by Patricia Wilson, who spearheaded the founding of the group in 2003. The other members were all in. So, for the past few months, they have collected and cleaned dolls, researched countries and costumes, sewn and stitched. The result is a tree celebrating 38 countries around the world. The vibrant costumes and miniature national flags represent more than a Christmas project; they reflect the bond these women who ended up in the same small city in Mississippi -- from Australia, Mexico, Japan, Peru, China, the Philippines and Iceland -- have formed.

For some spouses over the years, it has been a lifeline.

"The purpose is to reach out to the international spouses who are coming in from different countries," said Wilson. Originally from Mexico, she moved to Mississippi in 2003 from Ramstein Air Base in Germany when her husband, now a simulator instructor, came to CAFB. She remembers what an adjustment it was.

"We don't want the spouses to feel so isolated. We're just trying to help them out, help them find resources, show them things like how to shop at the commissary and in town. If they don't speak English, the goal is to try to find somebody in Columbus who speaks their language."

The need for such a support system was impressed on Wilson early, when a CAFB squadron commander contacted her, requesting her help at the hospital to translate for an Air Force spouse who didn't speak English. Wilson learned that the woman, unfamiliar with the language and knowing no one, had virtually retreated into isolation. Wilson became aware of similar situations with other spouses.

"I realized we needed to do something," she said. With the support of the then-wing commander and his wife, the group was established by 2004. Wilson approached squadron commanders and student pilot squadrons to spread the word. The group has thrived, even though its size fluctuates as pilot classes and personnel arrive and depart. It's been as large as 50-plus; currently there are about 10 participants. One is Wendy Geduld, from near Beijing, China, a sprawling capital of more than 20 million people. Her husband, a simulator instructor, has been stationed at CAFB three separate times.

"The first couple of times, I am miserable -- such a small place, no friends," Geduld said. "But third time, I met Patricia and met the group."

That was six years ago. Geduld discovered a support network and has since been involved in all its activities, including serving as a hostess during the Columbus Pilgrimage, something the group regularly takes part in.

"I have friends now and it makes me happy," she smiled. "And now we've decided to retire here!"

For the library tree, Geduld and the rest of the group met at Wilson's home to design costumes for 38 dolls they collected with the help of the CAFB Thrift Store.

"We just ran with it," Wilson said. "We did research to find authentic costumes from different countries. The girls brought their glue guns, needles and thread. We'd usually get together twice a week, and if some of them couldn't come by, they'd pick up a doll and take her home to work on."

Interestingly, most of the international costumes are made from scrap materials Wilson saved while making numerous Pilgrimage gowns.

But first, the rescued Barbies and Barbie-like dolls had to undergo cleaning and rehab.

"We used YouTube -- how to wash and style her hair, how to comb her hair, suggestions on how to make the clothes ... you'd be surprised what's on YouTube," Wilson chuckled.

"They even put rollers in the dolls' hair," said Rosana Williams, originally from Lima, Peru. She's been in Columbus three years with her husband, a simulator instructor. She is a bilingual secretary and interpreter and works with Spanish-speaking individuals wanting to learn English.

"It was all very well done; they researched the costumes for each doll, and it needed to be precise," she remarked.

Karen Widner from Sydney, Australia, outfitted a doll in her home country's Olympic colors of green and gold, adding a traditional wide-brimmed Akubra hat. She's been in Columbus about 18 months; her husband is the logistics readiness squadron commander. Widner discovered the spouses group shortly before Pilgrimage and was soon recruited as a tour hostess. The group helped her get to know her new community.

"It's one thing to move to a different city in the military every couple of years, but to move to a whole new country and not know anyone -- it's just good to connect with others who know what you're going through," she said. "Their understanding and acceptance -- and being able to share stories with them -- has been fantastic."

Thirty-eight costumed dolls went up on the library tree in short order Monday, thanks in large part to the "practice tree" Wilson's husband put up at home. The dolls were all pre-wired, "so that when we got there, all we had to do is put them up," Wilson said.

As each person placed the doll they had outfitted in their own country's traditional dress, thoughts may have drifted to Christmases they had celebrated there.

For Widner, that would mean much warmer weather, for December falls in Australia's summer.

"It's definitely widely celebrated, but it's summer there, so traditionally our Christmases are outdoors, around the barbecue. We do turkey, but also seafood and lobster tails. It's a bit more relaxed," she said.

If Williams were in Peru, where the population is largely Catholic, she would expect to be at church at midnight on the 24th.

"In Peru, we have a late dinner and then go to church, and we come back and open the presents," she said. "The cuisine at Christmas is many of the same things (as here), turkey, sweet potatoes ... but we don't have pumpkin pie."

In central Japan, where Tamami Sugo is from, observing Christmas is very popular, she said.

"But after Christmas Day, we have to clean up everything; in Japan we have big celebration for New Year's Day, so we have to change all the decorations. The New Year's is the biggest, celebrated from Jan. 1-3."

The International Spouses Group, Williams said, is all about learning of each other's cultures and being together.

"To me, it is a super-needed friendship. It's like a sisterhood almost," she said. "It's not just international wives by title. We really share our experiences, our lives, our different foods, different languages -- and somehow we all understand each other."

Editor's note: To learn more about the group, email Wilson at [email protected]