Random acts of kindness ... from gallons of gas to warm coats, a random round-up of kindness 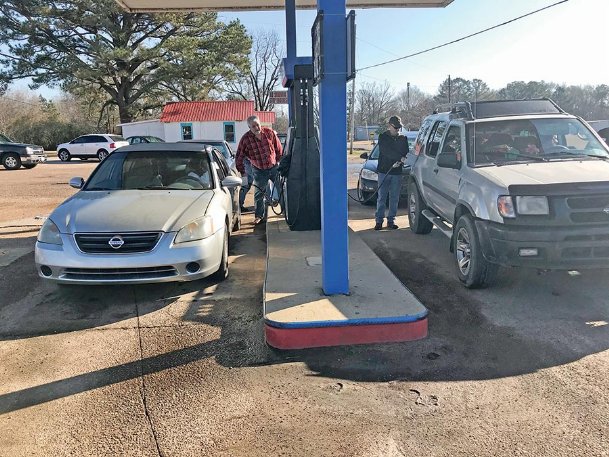 Tim Hudson, left, and Mark Younger of Piney Grove United Methodist Church surprise drivers by purchasing and pumping their gas at the Steens Superette the morning of Dec. 7. The unpublicized "Random Acts of Kindness" by the church in Steens was to give back to the community â one of many ways people in the Golden Triangle are reaching out to others this season. "The church family is a jewel and is always looking forward to the next event," said Piney Grove Pastor Andy Tentoni. Photo by: Courtesy photo

JoAnn Richardson, director of Coleman Head Start Center in Columbus, holds up a new coat donated to the center's coat drive. The school hopes to be able to give all of its 283 students a coat or a gift this season.
Photo by: Jennifer Mosbrucker/Dispatch Staff 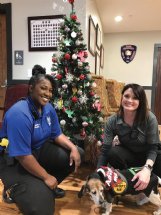 Members of the Columbus-Lowndes County Alumnae Chapter of Delta Sigma Theta Sorority sort gifts to be distributed to about 250 families through the Building Bridges of Hope program. From left are Linda Jones, Dorothy Colom, Leatha Anthony, Jackie Stennis and Tavetia Hughes.
Photo by: Courtesy photo 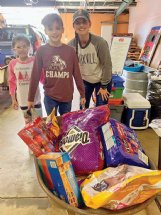 Molly Kate, Jack and Amy Aarhus of Starkville load up donations to the Oktibbeha County Humane Society that came from the United Way of North Central Mississippiâs United We Feed drive. Molly Kate and Jack are the children of Craig and Amy Aarhus.
Photo by: Courtesy photo

Tim Hudson found out that pumping gas can be good for the soul. He made the discovery on the first Saturday in December, when he helped fill the gas tanks of nearly 40 vehicles at Steens Superette. The unpublicized "Random Acts of Kindness" by Piney Grove United Methodist Church in Steens astonished drivers with free gas and spread plenty of Christmas cheer.

"We wanted it to be a surprise blessing," said Pastor Andy Tentoni. It was how the congregation chose to utilize some funds that had come its way.

"At the beginning of the past two fall seasons, Piney Grove has hosted a community-wide fish fry for Steens," Tentoni explained. "No cost, no strings attached, just an outreach of neighborly love to our community. We've never requested anything in return, yet because of the generosity and heart of these good people, Piney Grove was gifted nearly $1,000 in donations. We set that money aside as we waited for God to lead us in how we could use these gifts to benefit our community."

What members decided on was to purchase and pump gas for every vehicle that pulled in on that sunny Saturday, until the funds were used. It took about one hour and 20 minutes to top up tanks for 38 families with a total of $1,121 in gas.

Hudson and other volunteers at the pumps noted a variety of responses from the lucky recipients of fuel.

"I tell you what I noticed, the look on people's faces. The reaction was shock, a couple of people with tears, some that were laughing -- just this whole range of reactions," he said. "One man said, 'Gosh, I just got laid off from work, got my notice.' So, some of it was very needed."

Acts of kindness surround us, if we care to look -- particularly at this time of year.

At the Mississippi State University College of Veterinary Medicine, Terri Snead in the Department of Pathobiology and Population Medicine spearheads a drive to donate hygiene items for the Starkville Oktibbeha Consolidated School District Clothes Closets.

"About eight years ago we just decided that it was kind of silly to exchange gifts in the office," Snead said. Instead, each December the faculty and staff adopt a different cause.

"This year we'll buy items like toiletries, underwear and Tide, things that the social workers that work with the school district can utilize and take into homes where they are needed. It's much more meaningful. Ever since we started doing this, people get real excited about it."

"The SOCSD Clothes Closets are a true community effort and couldn't run without the generosity and help of many individuals, service organizations, university groups, businesses and churches in Starkville," said coordinator Marchelle Brain.

Nearby, at the Starkville Police Department, it's clear that acts of kindness can be intended for four-legged friends as well. A tree in the SPD lobby is covered with paper angels with cat and dog silhouettes. Each angel to be "adopted" lists a few items the shelter animals need.

"It's really cute; they individualized the ornaments. Some of the items on them include cat treats, kitty litter, toys, bandanas and dog food," said Erica Claycomb, pet marketing assistant for the humane society. "We appreciate it so much."

The Columbus-Lowndes County Alumnae Chapter of Delta Sigma Theta Sorority is busy sorting through gifts intended for about 250 families in the Building Bridges for Hope program. Tavetia Hughes and fellow members are helping donate, sort and wrap items.

"We have a nursing home ministry year-round -- we sing songs, we do a prayer, have Bible studies," Hughes said. "There are a lot of people at nursing homes who don't have people to come see them."

Of these acts of kindness, she said, "We're moved to do it because it's the season of giving. If God could give his only son to the world, surely we can give our time to people who don't have things, or people to do for them at Christmas."

Other examples of giving are abundant -- MSU's Day One Leadership Class building a much-needed fence for the Columbus-Lowndes Humane Society, Champion's Towing and Recovery offering to pick up 30 hefty containers of cat litter and delivering them to the shelter, a coat drive at Coleman Head Start in Lowndes County, a fitness center collecting supplies for a domestic violence shelter, a neighbor "adopting" a family going through a hard time.

For many, doing for others is at the heart of the season.

"It sparks your memory, to give," said Hughes. "It is the season of giving."

And in giving, most people find fulfillment.

"I guarantee you," said Hudson after his morning pumping gas, "I felt better than they did."