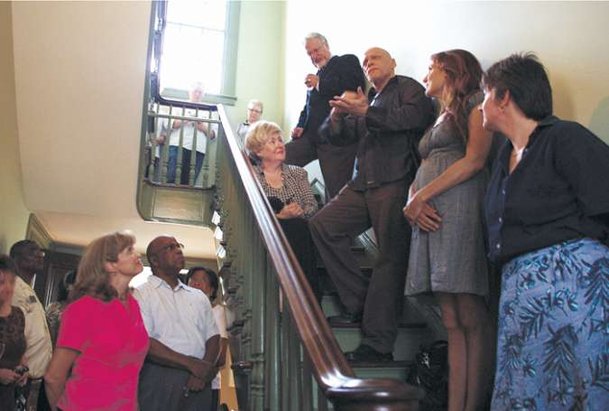 On the staircase at right are, from bottom to top, Francesca Williams, Tennessee Williamsâ niece; film director Jodie Markell; John Uecker, who recently donated the wreath that was placed on Tennessee Williamsâ coffin during his funeral; and Dr. John Gronbeck-Tedesco, 2010 Mississippi University for Women scholars panel, Tennessee Williams tribute. Sitting among them is tribute committee chairwoman Brenda Caradine. Photo by: Kelly Tippett 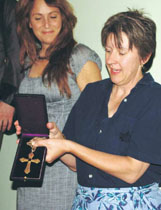 Francesca Williams holds the cross that her family donated to the Tennessee Williams Home. âDad called it Bishopâs Cross,â she said.
Photo by: Kelly Tippett

The atmosphere was almost religious Thursday at the grand opening of the newly renovated Tennessee Williams Welcome Center in downtown Columbus.

The more than 3,000 square-foot house, where the Pulitzer Prize-winning playwright briefly lived in the early 1900s after his birth in Columbus, serves as both a museum and a welcome center.

Williams'' niece, Francesca Williams, was present at the opening Thursday to give the center a golden cross that belonged to Williams'' brother.

"She felt it was so much more appropriate (in the center)," said Columbus Cultural Heritage Foundation Project Manager Nancy Carpenter.

Tennessee Williams'' former assistant, John Uecker, was also present to donate the laurel wreath that was on Williams'' casket to the center.

"Now we have the cross and the crown," said Tennessee Williams Volunteer Committee Chairwoman Brenda Caradine.

Uecker said the "spiritual nature" of the house was "the real deal" and rises above the sensationalism that surrounds Williams'' legacy.

"Northerners can''t get this," he said of the quaint house. "It''s in the blood."

Both pieces will be on display at the center, which is furnished and painted to resemble houses in the period between 1875 and 1911.

The project to renovate the home inside and out, and replace its roof, has cost roughly $400,000. The house, originally the rectory of St. Paul''s Episcopal Church, was relocated from its original location a couple blocks away in 1993.

"In the past, it was nice. But it was nothing like this," said Carpenter, who called the house a "gem" of the city.

The national literary landmark may be a gem, but it could be a gold mine for the city next year as visitors flood the city for Williams'' 100th birthday.

"This is a home the whole town can be proud of," said Columbus Convention and Visitors Bureau board member Dixie Butler.