A move for migraines: Detective work and a 600-plus mile move unlock a migraine mystery 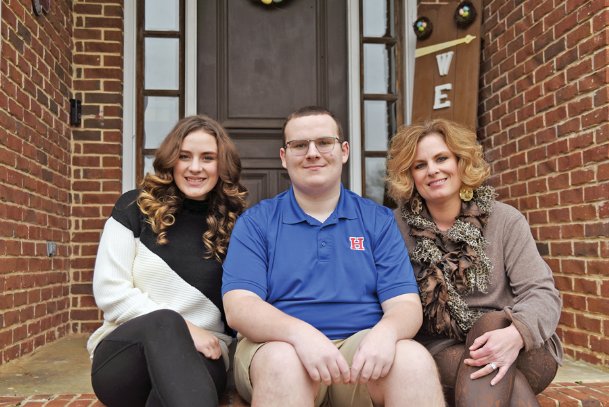 Migraine sufferer Robert Pushis, 17, relaxes Wednesday on the front porch of the family's Columbus home with his sister, Hailey Pushis, 15, left, and his mother, Jeanne Pushis. His father, not pictured, is Neil Pushis. The family's move from Indiana to Mississippi in 2017 turned Robert's health situation around. Photo by: Deanna Robinson/Dispatch Staff 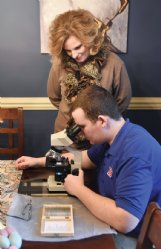 Robert Pushis, pictured Wednesday with his mother, Jeanne, likes to study as many items as he can with his microscope. He hopes to eventually go into the medical field.
Photo by: Deanna Robinson/Dispatch Staff 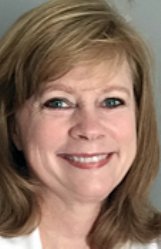 For Robert Pushis, the misery of migraines began when he was just a boy of 7 growing up in Fort Wayne, Indiana. Chronic nausea, projectile vomiting, loss of vision and other symptoms were so frequent, every aspect of his young life was affected. During the next several years, his parents, Neil and Jeanne Pushis, took him to allergists, to ear, nose and throat specialists and to three different neurologists in hope of answers and relief for the crippling headaches that sometimes lasted 12 to 18 hours.

"The ones right behind the eye are always the worst," said Robert, now 17.

"It was horrible," Jeanne said in a broadcast segment about migraines the family was in on ABC's "Good Morning America" Wednesday. "Any time you see your child suffer and you can't relieve the pain somehow, it's a nightmare."

Migraine is the second leading cause of disability in the U.S., according to the Alliance for Headache Disorders Advocacy. Diagnosing the neurological disease can be difficult, noted Dr. Lawrence Newman, director of the Division of Headache at New York University Langone Health, on ABC; more than 300 medical conditions are associated with migraines. Not all sufferers have the same triggers or experience the same symptoms.

"A lot of people think it's just a headache," Jeanne told The Dispatch. "Yes, it's a headache, but it's going to have 15 other things going on with it that can make it so much worse. ... It's not a one-size-fits-all. ... It took until Robert was about 13 or 14 to figure out what his triggers were."

A major break for the Pushis family came when a neurologist they consulted suggested tracking air pressure. It seemed a non-starter at first, but then, they had tried almost everything else. Sure enough, Robert's parents began to realize significant changes in pressure correlated with migraine attacks.

As spring break 2016 approached, the family planned a vacation to Florida. On the way back, since both Neil and Jeanne worked at Steel Dynamics Inc. in Fort Wayne, they made a stop in Columbus to see the SDI facility in Lowndes County.

"In a nutshell, we were gone 10 days, and Robert was never sick," Jeanne said. "It seems like once we got him south of the Mason-Dixon line, he improved. ... Once we got home, he was down again."

By the fall of 2016, Robert's headaches were causing him to miss so much school, Jeanne was homeschooling.

"No one (at school) would actually believe me at all, so they would just write it off as if I was faking it completely just so I could get out of school," he said on the ABC segment.

The revelation of how much atmospheric pressure affected Robert motivated his father to look at transferring to the Columbus SDI location. To uproot the whole family and move more than 650 miles away for headache relief was a major decision.

"But when your child is chronically ill and in constant pain, you'll do anything to make them feel better," said Robert's mother.

Even his younger sister Hailey agreed.

"Unless someone has migraines, or knows someone who has, they don't really understand how bad it is," said Hailey, 15. "It made me wish I could suffer instead of him; he didn't deserve it. I wouldn't wish migraines on anyone."

The family headed south during spring break again in March 2017, and Neil interviewed at SDI in Columbus.

"Taking him back to Indiana was hard," said Jeanne. "I don't think there was a harder thing I've ever had to do."

Soon after, however, the Pushis family's life dramatically changed. Neil took the position in Mississippi, and everyone moved to Columbus in July 2017.

"It was quite a family event," Jeanne said. "My parents even moved here, too."

Robert is now a junior at Heritage Academy, making good grades and taking college credit courses. He likes video games, reading, science and medicine, as well as studying anything and everything under his microscope. He hopes to one day become a neurosurgeon.

"He's doing really, really well," said Jeanne. "He gets a migraine once in a while -- it's a huge change in temperature that'll get him sometimes -- but nothing like what we were dealing with back home."

Board certified nurse practitioner Amy Robertson of Allegro Family Clinic in Columbus treats Robert and has a particular empathy -- she has been a migraine sufferer, too.

"I'm extremely passionate about migraines from a personal standpoint, and I especially have great empathy for children (who get them)."

Robertson began experiencing migraine pain in her mid-30s. Like Robert, she saw a neurologist. She also read everything she could on the topic. Her detective work revealed that among her triggers were artificial sweeteners, caffeine, dehydration, fatigue and stress.

"You just get all those things lined up and it's like a perfect storm and that headache becomes so severe," said Robertson who once endured a migraine lasting nine days. Now she modifies factors within her control to help manage the condition. She advises that other sufferers learn all they can, recognizing that types of migraines vary, as do triggers. Among them can be alcohol, caffeine, aged cheeses, cured meats, aspartame, bright lights, hormonal changes, strong smells, physical exertion or, as in Robert's case, changes in barometric pressure.

Keeping a headache diary can be a valuable tool in helping you and your physician identify possible triggers. Keep detailed records of foods eaten, activities and circumstances beforehand, warning signs, location, intensity and duration of pain in a notebook, on available preprinted forms or even by downloading headache apps, advises Harvard Health Publishing.

Consult a health care professional and "keep trying to figure out what is triggering it," said Jeanne. "You have to keep seeking help."

Raising awareness of the need for migraine research and more physicians to treat the disease is a Pushis family effort. Hailey and Robert have worked to get the month of June declared Chronic Migraine Awareness Month in Mississippi for three consecutive years. The siblings visited the state capitol for the proclamation signing by the governor.

In addition to appearing in the ABC migraine segment Feb. 19, earlier this month the family represented Mississippi in Washington, D.C., at Headache on the Hill, an annual advocacy event organized by the Alliance for Headache Disorders Advocacy. They met with lawmakers to encourage support for specific bills to facilitate physician training.

Hailey, currently the 2020 USA National Miss Mississippi Jr. Teen, has made migraine awareness her pageant platform and organized events at Heritage Academy and in the local community.

The work continues, and Robert, because he is doing so much better, is now able to be a bigger part of it.

"Everyone has been so supportive," said Jeanne. "We love it here. I'm still trying to get used to the humidity and bugs as big as cats," she smiled, "but everyone is so kind and nice. The move was definitely for the best."

Her son, seated behind his microscope at home, agreed. "It's given me a lot more freedom in what I think I can do."

Learn more about migraines at migrainedisorders.org, migraineresearchfoundation.org or uspainfoundation.org, among other resources. Read another story about the Pushis family and their migraine journey at invisibleproject.org/the-pushis-family/.