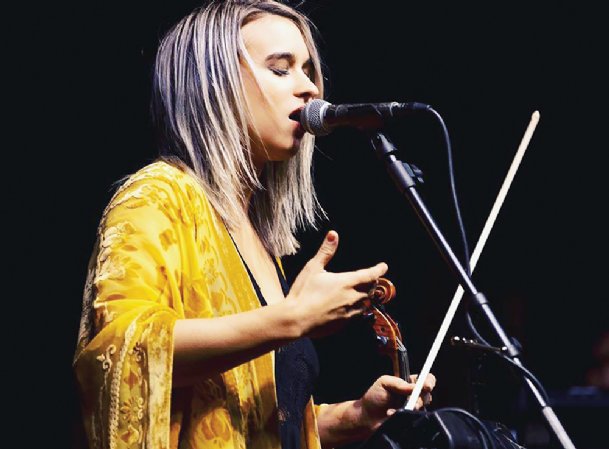 Ruby Jane Smith grew up in Columbus, and now lives in Austin, Texas. The fiddler, singer and songwriter is a contestant on "The Bachelor Presents: Listen to Your Heart" which premieres on ABC Monday night at 7 p.m. Photo by: Courtesy photo

As a fiddling prodigy growing up in Columbus, Ruby Jane Smith was often seen performing alongside her mentor, Grand Ole Opry alumnus Jim Brock of Lamar County, Alabama. Her prolific love of music was on display on stages from the Columbus Arts Council to regional bluegrass festivals. At age 10, she was the youngest invited fiddler to play the historic Opry in Nashville herself. In 2007, Ruby Jane and her mother, JoBelle Smith, relocated to the music mecca of Austin, Texas. Within a year, Ruby Jane had played her first Austin City Limits Festival, as a member of Ray Benson's Asleep at the Wheel. She was just 13.

On Monday night at 7 p.m., a grown-up Smith steps away from performing with her indie pop band, Ruby Jane and the Reckless, to search for love on ABC's "The Bachelor Presents: Listen to Your Heart." The network describes this latest "Bachelor" spin-off as a program that "unites two of the most emotionally powerful forces in human life: music and love."

The reality TV dating show will follow a cast of single male and female musicians trying to "find love through music." Contestants will perform songs individually and paired as couples. Well-known figures in the music business will judge musical challenges and live performances,

"I listened to my heart and it led me straight to ABC for the first-ever season of 'The Bachelor Presents: Listen to Your Heart,' the 25-year-old Smith posted to Facebook. Bound by show guidelines, she was unable to speak with The Dispatch about the program in advance. Self-described as "a Mississippi girl to the bone" in her Bachelor Nation bio, Smith, who still has family in Columbus, also lists performing for all five living U.S. presidents as a fun fact.

Smith played on Willie Nelson's Grammy-nominated "Willie and the Wheel" and has performed with numerous artists including Lady Gaga, Blues Traveler, Big and Rich and Drake Bell. She has recorded four CDs of her own. Her 2006 debut album was titled "Road to Columbus." In 2005, she won the Mississippi State Fiddle Championship and in 2007, Smith won the Daniel Pearl Memorial Violin award.

"The Bachelor Presents: Listen to Your Heart" premieres at 7 p.m. CT Monday on ABC.