Quarantine hair: Waiting it out? Going DIY? We asked around. 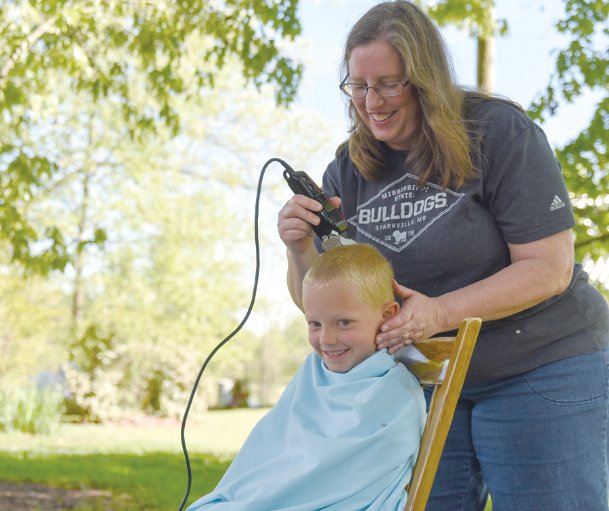 Six-year-old Toby Carpenter sits still as his mom, Dawn Carpenter, cuts his hair with clippers on a warm early April afternoon outside their house in west Lowndes County. Cutting hair at home is routine for the Carpenter family, which includes eight children. For many, though, a month without barbers and stylists during current COVID-19 closures, begs the question: "What are we doing about our hair?" Photo by: Deanna Robinson/Dispatch Staff 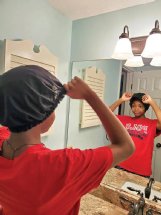 Tailar McGowan, 13, covers her hair with a bonnet at home in Columbus Wednesday. Bonnets are alternatives until she can get her hair braided again, after salons are able to reopen. Tailar is the daughter of Roz and Cynthia Cunningham.
Photo by: Courtesy photo

Christine Carpenter, 22, sections and trims her own hair at home in Columbus. She watched videos for tips.
Photo by: Deanna Robinson/Dispatch Staff 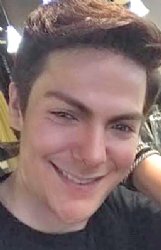 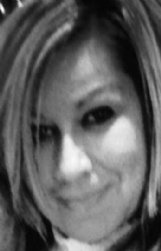 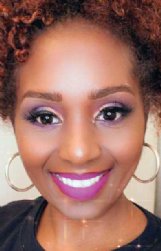 A meme circulating on social media reads, "Dear people in charge, please let the hairdressers and barbers out first."

The tongue-in-cheek SOS for our collective hair shouldn't be surprising. It has now been about a month since area stylists and barber shops had to close in keeping with slowing the spread of COVID-19. Staying healthy is first and foremost. Hair, by comparison, isn't of monumental importance. But it is a facet of life affected by a socially-distanced world. And while there are plenty of laudable DIY projects out there to help us put the extra time apart to good use, coloring or cutting our own hair -- for most of us -- may not necessarily be one of them.

"I usually get my color done every six to eight weeks -- and it won't be very long before everybody knows that," said Sarah Nichols in Oktibbeha County. Her quandary is shared by many women, and some men, whose tresses are revealing secrets. For others, it's a non-issue.

"I just twist it up in a little bun," said Claire Spradling of West Point. "I've let it go gray for so long, I don't worry about it. When we have to go out we wear the mask and the gloves, so we're in disguise anyway."

Carol Stone in Columbus added, "I'm really not going anywhere or seeing anyone outside my family, so, for once, I'm feeling free and letting it do its own thing."

For those accustomed to professional color, stylist Jansen Fair of Starkville believes an attitude of acceptance is probably safer than running to the supermarket aisle of boxed hair dyes.

"Avoid doing anything with chemicals," advised Fair, who works at Jamie's Salon in Columbus. "I've seen pictures of people's hair melting, or breaking or turning purple or yellow. If an accident happens, you can't get help right now. You can't go to someone to stop it or keep it from getting worse, and a lot of the time those chemicals don't stop working without a neutralizer."

Color corrections by licensed professionals, he noted, generally "cost a lot more" than a typical salon visit. Damaged hair can take a while to recover.

Temporary touch-ups for roots range from spray-on color or powders, to brown eyebrow pencil or, in a pinch, a light touch of mascara. Or, just go natural. A number of celebrities are embracing a "show your roots" spirit, posting photos of their gray, dark or light hair coming in

Fair said, "It's become kind of a cool badge of solidarity."

For some, like Dawn Carpenter in west Lowndes County, cutting hair at home is routine. With eight children ages 3 to 22, there are plenty of heads to work on.

"There are 10 of us, if you count mom and dad. We do everybody's here," Carpenter said. She wields clippers to give all the boys, including husband Cully, close simple cuts. Daughter Christine began trimming her own about a year ago. One thing they've all learned: "Hair does grow back," Carpenter said.

For those unaccustomed to at-home cuts, letting hair grow out for now has benefits. It's an opportunity to experiment with different styles or accessories. Headbands and clips, for example. The main aim should be to keep hair healthy and strong. Use quarantine time to apply extra conditioning treatments. Avoid hot tools and let hair air dry. Wash less frequently so natural oils get a chance to nourish hair.

If even a minor trim just can't wait until shops reopen, Carpenter suggested checking out tutorial videos. A few generalized tips online for an emergency trim include: Keep it simple. Be conservative. Invest in good shears: kitchen scissors aren't the answer. For men using clippers, be sure to use a guard to control the length of cut.

"One thing in our house is just finding peace and quiet and time to focus on (cutting). Distractions are not good," Carpenter said. She offered a tip: Find a place that's easy to sweep up, maybe even outside on a nice day.

"I ain't lettin' nobody else touch mine and end up with some horrible haircut and have to shave my head," he laughed. "I've made that mistake once or twice in my lifetime."

Barber Dawn Clausen of Dawn's 45 Barbershop in Columbus has been cutting hair for more than 20 years. She suggested, "Maybe try to trim around the ears and the neck, but please, do not try to give yourself a complete haircut at home."

"Most of us aren't doing anything (with hair); I've had my bonnet on for a month," said Cunningham. She normally has her hair braided, a style that can last about three months.

"But that three months was up right around March. I had to take my own braids out; that's a chore," she remarked. "All we can do is wait. I'll be sitting in someone's chair as soon as this is over."

Karletta Harris owns Transformations by Karletta in east Columbus and styles hair for a host of African-American women.

"Just put your hair in a ponytail, anything, just don't cut it," advised the hairdresser who has been staying in touch with clients by phone and on booksy.com. There, she's been able to provide free video advice on how customers can maintain hair until they can get back in the salon.

"It's been really stressful, though, because I moved to a new location in January, a larger space, and I was doing a lot of advertising," Harris said. "It was devastating when we had to close up."

"It breaks my heart not to be able to go to work every day. I just know that people like us depend on this. This is our livelihood. It's very sobering. ... May we all come through this unscathed."

You may want to consider ...

While your regular stylist or barber is unable to open, ways to help can include: