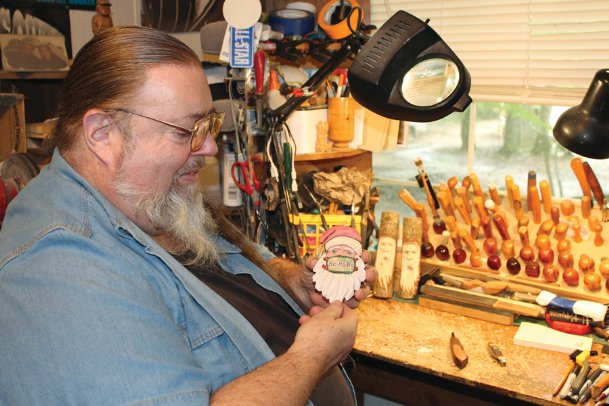 Surrounded by tools of his craft, woodcarver Michael Bailey holds a commissioned Santa wearing a protective mask that reads "Ho Ho Ho" Thursday. The basswood carving is one way the artisan, pictured at his home in east Lowndes County, has incorporated recent conditions into his work. Photo by: Jan Swoope/Dispatch Staff

In her home studio Friday, folk artist Elayne Goodman of Columbus talks about found objects in a project she started during "shelter in place."
Photo by: Jan Swoope/Dispatch Staff 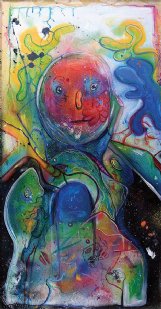 This painting by Joseph A. MacGown of Starkville is part of an international virtual exhibition, "Convergence: Art in the Age of Pandaemonia." His father, Joe MacGown, is also an invited featured artist.
Photo by: Courtesy photo 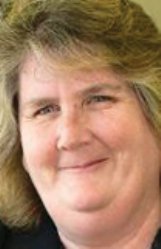 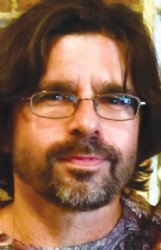 Just about the time Michael Bailey was prepping to show and sell his wood carvings at the Columbus Spring Pilgrimage's Artisans Alley set for March 28, COVID-19 canceled everything.

Angie Basson looked forward to returning to the event, too, to market her metalwork-on-wood plaques. As that and similar events and festivals were called off due to the pandemic, Bailey, Basson and a host of artisans like them missed out on a spring's worth of opportunities to connect face-to-face with the viewing and buying public.

"When Artisans Alley was canceled that was a big blow to us," said Bailey, whose wife, Debby, is also a craftsperson, making vintage-style aprons. No one is quite sure when shows or on-site exhibitions will resume, teeming with enthusiasts eager for original artwork. Uncertainty, however, doesn't stem creative flow. Nor does a quarantine.

"I would do it even if I was just stacking it up in the corner," said Elayne Goodman. "It's really not a choice for me."

Goodman, an acclaimed folk artist, has spent part of the recent "shelter in place" weeks "building" a house. "Constructed" with yardsticks and furnished with an eclectic assortment of found objects, the whimsical project has been liberating.

"This was a piece I've just cut loose on," Goodman said. "I just let myself do anything I wanted to do."

The piece reflects, in its way, current circumstances. A series of numbers representing dates is jumbled "because I can't keep the days straight," quipped the artist. References on it to the realm of medicine are timely, too.

"It's just got hundreds of things in it, and I'm very happy with it," said Goodman.

The pandemic hasn't greatly altered Goodman's daily routine: She already spent much of her time in her studio at home. But it did impact viewership of a three-month Kentuck Art Gallery exhibition of her work at the Hotel Indigo in Tuscaloosa, Alabama. It also delayed a Columbus Arts Council Goodman showcase slated for May. That is provisionally rescheduled for July.

"And glue. I was out of glue of every sort," she said. "The fact that Hobby Lobby hasn't been open is like the grocery store being closed. When I could I went in and just had a ball buying glue.

"Our life isn't so different because of the virus, but it's hard to know that you don't have the freedom to do whatever you want."

Masks have gained a prominent profile in the era of "shelter in place," from N95s to folded bandanas. It should be no surprise they are surfacing in the artwork of the period.

Each year, Michael Bailey tries to introduce a new style of Santa to his popular selection of Christmas carvings. He's well-known for not only Santas but wood spirits, firefighters, bikers, mountain men and other characters. Some of his work can be seen at facebook.com/michael.bailey.9887. He also has an online Etsy store.

"Someone got in touch with me who has a daughter in the medical field, and she hit me up with this idea," Bailey said, holding up a commissioned piece he calls "Corona Claus," a masked Santa ornament. "I'll for sure make a few more of these for closer to Christmas."

"As far as the quarantine, that hasn't changed much, but what has changed is shipping and stuff like that, and some supplies like paint that I do have to get," he said.

Like everyone else, he is ready for the pandemic to pass.

"I have a couple of shows in October and November, but I'm not counting on them yet."

"I've always loved masks. I think they kinda talk to the shy kid in me," she said. "You can hide behind a mask and become pretty much whatever you want to be."

Basson's creative curiosity has manifested itself before in metal sculpture, photography, ironwork, even bark drawings. For her masks, she chose beads.

"I just wanted to see if I can do it," she said of the forms she purchased and painstakingly covered with glass beads. She plans to have them framed.

Producing art in this remarkable time is one part of the creative equation. Another is sharing it.

"It's both a fantastic time to create, with lots of time and inspiration, but it's almost impossible to sell original work currently," remarked Joe MacGown of Starkville. "Me and others are coming up with novel ways to show art virtually."

MacGown, well-known for his surrealistic drawings, is a featured artist in the innovative virtual exhibition "Convergence: Art in the Age of Pandaemonia." His son, Joseph H. MacGown, also has artwork in it. The online showcase of contemporary, surreal, visionary, fantastic and figurative artists from the four continents of the world may be accessed at dreamsanddivinities.com.

"We were thrilled to be invited to be a part of this show featuring some incredible international artists," said Joe MacGown. A portion of proceeds from sales of the official catalog benefits charities that aid COVID-19 frontliners.

In a time of crisis, the role of art can often be overlooked. But this sampling of area artists illustrates that creativity continues to flourish. That making a carving, a mask, a painting or a one-of-a-kind objet d'art are valid expressions of how art always finds a way.