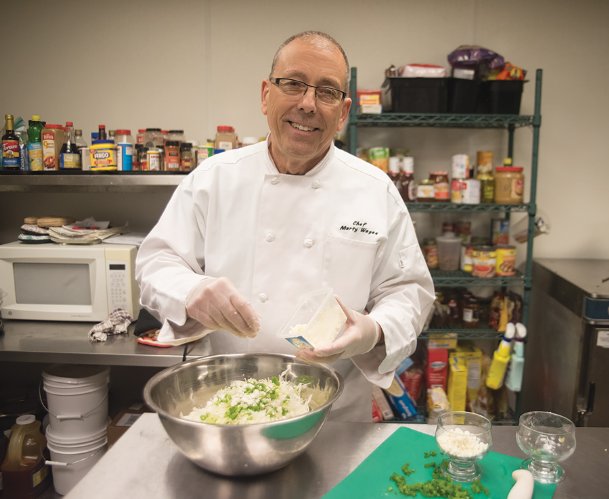 Caterer Marty Wages of Columbus shares a recipe today for one of his popular dishes, Parmesan artichoke chicken. Photo by: Dispatch file photo

Whether feeding a few or many, this Parmesan artichoke chicken dish from caterer and chef Marty Wages of Columbus is, he said, "the easiest recipe in the world, and it is delicious."

It's one of his go-tos when planning a menu for a large catered event, or even advising young brides just starting to cook.

"If I have 300 people to feed I love it because it's simple and uses so few ingredients," Wages said. "And it's a great low-carb dish."

At the heart of the recipe are boneless skinless chicken breasts, butterflied and flattened. They can be purchased frozen in a bag. Don't use overly large chicken breasts; by the time the center cooks to 165 degrees, the rest can be over-cooked.

The only other ingredients needed are artichoke hearts, Parmesan cheese, garlic powder and mayo.

"Don't tell your husband (or kids) it has artichokes in it because some people are preconditioned against them," Wages joked. "But everybody who's had this says it's scrumptious."

As for the garlic powder -- the recipe calls for 1/2 to 3/4 teaspoon -- a tip from the chef: "When you think you've got enough garlic powder, put a little bit more in because that's what makes it really good."

All events at The Southern, where Wages is chef, have been canceled during the COVID-19 crisis. The downtown Columbus venue hosts receptions and parties of all kinds. Like the rest of the food service industry, Wages has looked for ways to adapt. Recently, he began offering some of his signature foods by pre-order, for pick-up on Friday afternoons.

Pick-up is between 3-5 p.m. Fridays at The Southern, 513 Main St. Cash only payment; no cards or checks.

"We've been doing really well on Fridays," Wages said. "We're consistently selling out of nearly every item offered and are very appreciative of everyone's orders."

Wages hopes social venues and restaurants will soon be making their way back to bustling activity. But until then, continue to stay safe, support local businesses, enjoy more time with family and try out the Parmesan artichoke chicken.

"Anyone I've ever shown how to do it says it's the easiest," Wages said.

1/2 to 3/4 teaspoon garlic powder (add what you think it needs, then shake the bottle a couple more times because this is what makes the dish)

■ Drain and coarsely chop artichokes. Put artichokes in large mixing bowl along with the 2 cups Parmesan cheese, garlic powder and then begin adding mayo gradually until mixture holds together so you can mound on the chicken.

■ Spray your pan, pat dry the chicken breasts; put breasts in pan. Mound the artichoke mixture on the chicken and make sure it is spread over the entire chicken surface.