Dreams, interrupted: A licensed psychologist looks at the pandemic's impact on our sleep 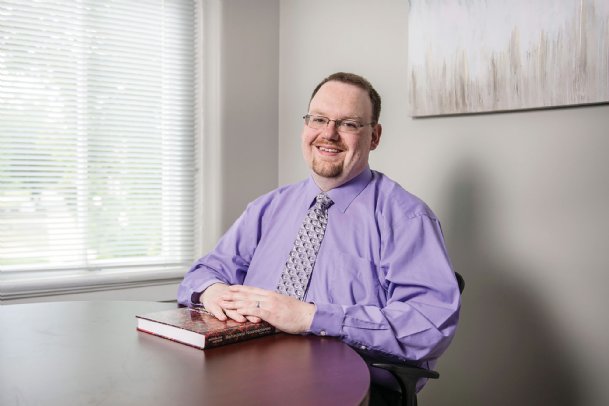 Mississippi State University Associate Professor Michael Nadorff specializes in behavioral sleep issues. He was interviewed about the effects of the global pandemic on sleep patterns for a segment that aired on "CBS Sunday Morning" May 17. Photo by: Photo by Logan Kirkland

Tossing. Turning. Waking in the night with remnants of fitful dreams troubling the mind. That's what Denise began to experience around mid-April. The stressed single mother, who asked that her last name remain private, had her work hours reduced in March due to COVID-19. She is not alone. Gutted paychecks, hammered retirement funds, attempts to homeschool, mounting bills -- plus nagging worry about possibly bringing a dangerous virus home to loved ones -- are enough to disturb anyone's rest. Under many roofs, coronavirus-related anxiety has interrupted America's slumber. And sleep deprivation weakens the body's defense system, increasing vulnerability to viruses, depression and depleted energy.

The global pandemic's impact on sleep patterns and dreams is a subject licensed psychologist Michael Nadorff at Mississippi State University has been studying. The associate professor in MSU's Department of Psychology even shared his expertise in a "CBS Sunday Morning" segment May 17. Nadorff, who has been with the university eight years, directs the department's Sleep, Suicide and Aging Laboratory and leads the clinical Ph.D. program. His research interests include assessment and treatment of suicidal behavior, behavioral sleep medicine -- particularly assessment and interventions for insomnia and nightmare disorders -- and the use of technology for psychological treatment.

When the pandemic closed the MSU campus in mid-March, "We had to shut down our clinic, but I've had a lot of people since then, a lot of colleagues and cases that I supervise clinically, show a lot of us are having vivid, odd dreams right now," Nadorff told The Dispatch. For some already experiencing nightmares, pressures related to the coronavirus amped those up, he noted. And others who hadn't recorded having bad dreams before began to have them.

Many people, Nadorff said, may be experiencing a feeling of helplessness, of not being in control, of uncertainty for the future. He notes a hypothesis called activation-synthesis.

Basically, the hypothesis states that during dreams a lot of brain activation occurs, in part because a lot of memory consolidation occurs during REM sleep. It is one of the prime times for memories to be stored in long-term memory. Old memories are being pulled up and refreshed, and new memories are being encoded, Nadorff explained in a press release from the MSU Office of Public Affairs.

It's not unusual for virus-triggered worries to appear in dreams, the psychologists noted. Impacts of the pandemic, such as more time at home and loss of daytime structure, have had many people feeling like they are living the same day over and over again.

Even as Mississippi eases pandemic guidelines, the virus is still active. Identified cases and fatalities continue to mount.

"I think the reopening adds a layer of anxiety for many of us," Nadorff told The Dispatch. "It won't go down until we truly feel safe doing what we're doing, and that may not be until we have a vaccine."

Imagery and an app

The sleep clinic at MSU has begun to reopen, but a wait list is common. There are steps and techniques, however, anyone experiencing disturbing dreams can try, Nadorff said.

"I think the first couple of steps would be trying to do things to reduce stress," said the psychologist. Those include deep breathing and muscle relaxation.

"And one thing a lot of us have been doing is going to bed later and waking up later. The more we do that, the more likely we are to have bad dreams," he added.

"It's put together by the Department of Defense and the Veterans Administration. It's based upon imagery rehearsal therapy. ... (The therapy) sounds too simple to work, but it actually works very well."

Imagery rehearsal therapy teaches individuals to use visual imagery to change a nightmare or bad dream by visualizing, or rehearsing, a more positive dream. The individual generally practices for about 10 minutes twice or more a day.

"You can change the content to anything you want," Nadorff explained. Someone might even give themselves super powers in their dream, he said.

Nadorff relayed one imagery example, summarizing the story of a client who had a recurring nightmare that involved driving.

"He said one of his greatest regrets was that his dad died before his kids were born," the associate professor shared. With imagery rehearsal therapy, the client was able to reshape the bad dream into one of driving his children in a minivan to a park where his father was waiting and was able to meet all the kids. The dream transformation brought the client to tears when he shared the experience with Nadorff.

Potentially helpful suggestions from University of Chicago Medicine (uchicagomedicine.org) include creating a sleep schedule. While some adults may need six to nine hours of sleep, most need seven to eight. Find some "me time" before bedtime -- an hour free of electronics. Minimize conversation and calls. Take a hot bath or shower, play soothing music, try a meditation app, read a book or magazine.

The site suggests deep breathing using 10 slow deep breaths to fall asleep -- a slow inhale through the nose for three to four seconds, and slow exhale through the mouth for three to four seconds. Enhancing the sleep environment may help as well. Keep room temperature cool, try an eye mask or perhaps a white noise machine. Minimize any daytime naps, keeping them under half an hour, and before 2 p.m.

Perhaps most importantly, try not to let worry over sleep add to already-elevated stress.

Some anxiety, Nadorff said, is to be expected given what many have experienced in the past several months.

"Doing things to help reduce these worries and anxieties, such as relaxation exercises, trying not to worry about the things we cannot control, and limiting news consumption can help, as can maintaining a more normal sleep schedule," he said.

Michael Nadorff holds a bachelor's degree in psychology and computer applications from the University of Notre Dame, along with master's and doctoral degrees in clinical psychology from West Virginia University. He also completed a doctoral internship at the Baylor College of Medicine. He is a 2017 recipient of the Art Spielman Early Career Distinguished Achievement Award from the Society of Behavioral Sleep Medicine.

Editor's note: Some information in this story is courtesy of the MSU Office of Public Affairs.