In the garden with Felder: Sifting through to get to the real stuff 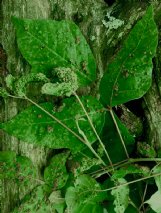 This week's emails included some real doozies, from an unusual problem with poison ivy and what kind of plant do I want to reincarnate as, to whatever it is that Imogene Fitch wants me to do.

Though most unsolicited emails go directly to the spam folder, a few legit-looking ones still get through. My fav was "Do, or undulate" from Imogene Fitch. Never heard of Imogene, and I don't understand, much less know how -- or what -- to undulate. I hope it was spam, 'cause it was promptly deleted, unopened.

Most of the truly bogus are pretty straightforward; I'm not certain why a lot of folks apparently think I suffer from various dysfunctions or have a few thousand dollars to send them out of the goodness of my heart. These messages, however, were alluring: "Why be an average guy any longer" when "there are loads of medications available" and "my loan has been approved."

Others are less comprehensible. The subject line of one just said "Revelation, and Abram had ought ye that gave Joshua read." Another was "Have metamorphic by cerebellum." Oh, and the ubiquitous "Failure Notice." Um, failure of what?

I wish I could make up stuff like that. But the truth is, some genuine ones seem squirrely, so I occasionally check my automatically deleted ones to make sure that I don't pass over legitimate messages from folks I actually know.

Some authentic garden-related ones have off-putting subject lines. Examples I've gotten that on the first read appear to be horticultural spam include "Plant database work" from a bona fide horticulture project I'm assisting with. "Greetings from the cold hole of Willow" was a Alaskan garden journalist friend sharing photos of his designer outhouse. "Summer chocolate mimosa" was an advert for a burgundy-leaf mimosa. And "New Hooters Calendar" came from an owl-loving friend in Oklahoma.

Some I have deleted unread could have been real garden notes. "Your Test Results" could be from a soil sample I sent off. "Grow Bigger, Faster" might have been offering a new shade tree. "Wow Your Loved One" may be for an alluring shrub rose. "Act Now Before It's Too Late" for treating squash vine borers? "Why Wait" to make compost, and "Don't Lose Your Chance" to plant summer vegetables.

But some are actually thought provoking. I had to do some research on the one about poison ivy with pink blisters on the leaves; I'd seen it myself, but hadn't given it much thought. The bumps and blisters are caused by a tiny egg-laying mite, which isn't a problem overall to the native with beautiful fall colors, but I'm glad to know that the pesky vine can get what it gives ... wonder if there's a Calamine lotion for plants?

Finally, not that I buy into or ponder the possibility, but what kind of plant would I want to come back as was worth a thought. Rather than go with something large and stately that lives for centuries such as oak, magnolia or bald cypress, and end up with beetles under my bark or owls in my trunk, or a noxious weed that no one can get rid of (tempting), I think I'd like to be Spanish moss, which is native, spreads faster than it dies, makes hummingbird nests, and goes with blue jeans. My shoulder-length gray hair is actually looking like it anyway.

Just like with Imogene Fitch and her undulations -- and real horticultural advice, for that matter -- I gotta pick through what's real, and what's not.

And hope if I somehow come back as poison ivy, it won't be with a rash.