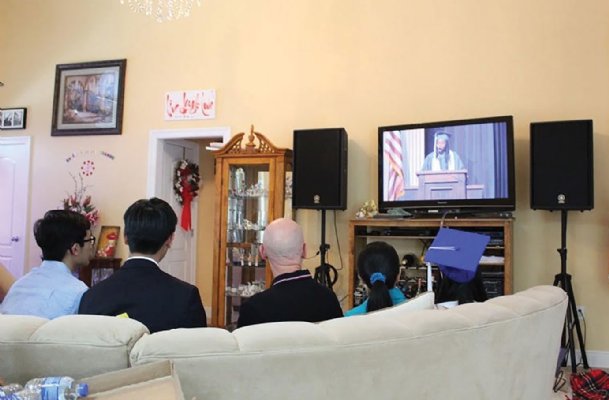 Mississippi School for Mathematics and Science senior Gina Nguyen, 18, far right, watches the MSMS virtual graduation ceremony May 23 at her home in D'Iberville with her brothers, Gary and Glenn, her mom Diane Nguyen, and her stepdad David Bennett. The 108 graduating seniors in the MSMS Class of 2020 were offered more than $28 million in scholarships; they accepted about $10.5 million. Photo by: Courtesy photo 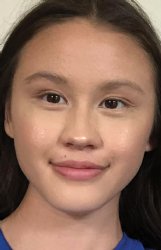 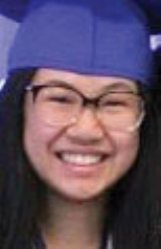 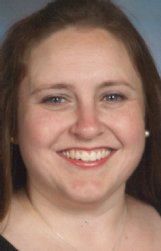 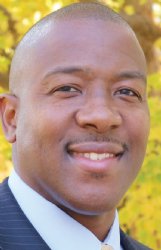 On the day Mississippi School for Mathematics and Science senior Linda Arnoldus had hoped to walk across the stage in Mississippi University for Women's Whitfield Hall to receive her diploma, the 17-year-old instead sat on a sofa with family members at her home in Starkville to watch a streamed virtual graduation. Many schools had to create similar ceremonies this month because COVID-19 suspended the final semester for the Class of 2020 everywhere. But unlike other schools, MSMS is Mississippi's only public, residential high school for the state's most academically gifted and talented students. Its seniors hail from 35 different counties. They won't be likely to bump into each other at a local fast food place or downtown boutique over the summer. These seniors didn't just attend MSMS; they lived together there. Their daily lives were entwined, morning, noon and night. When the global pandemic abruptly closed campus during spring break, most never got to say final goodbyes.

"MSMS is just like a huge family. Everybody knows everybody, and leaving and not coming back was like leaving your family members and not being able to visit them. It was really heartbreaking," said Arnoldus, who will attend Mississippi State University this fall to study aerospace engineering.

Senior Gina Nguyen of D'Iberville was in Boston visiting a brother when she got word campus was closing.

"It's a weird feeling that some of these people, if we don't get to have the (alternate) graduation event we hope to at the end of July, many of us could not see each other for years, or ever again," the 18-year old said. "We're all going to different parts of the country." Nguyen will head to the University of Southern California in August to major in Russian and journalism.

Every MSMS student expects to be challenged, but the Class of 2020's 108 seniors got one they could not have envisioned. As high-achieving teens, however, they adapted as instructors transitioned classes to a distance learning format. In a school where gains in ACT scores as high as 13 points can be realized, academics are demanding.

Elizabeth Morgan, MSMS chemistry instructor and one of three senior class sponsors, said a primary task was "preparing videos and lessons that would translate to online instruction where students don't have immediate opportunities to ask questions the way they would in class."

MSMS Executive Director Germain McConnell said, "It was a challenge to continue teaching new content during that time. Unlike some traditional school districts, we actually gave a grade for the fourth quarter."

Arnoldus said, "I do want to thank all our teachers for putting together all those online classes on such short notice."

In spite of the pandemic, the Class of 2020 acquitted themselves well.

McConnell said, "Our graduating class was offered more than 28 million dollars in scholarships, and they accepted about $10.5 million." Every graduating senior will attend college, the director added.

To retain a semblance of normalcy, administration, faculty, class sponsors and class officers video conferenced to still provide some of the experiences students would have had on campus, even if in modified form. Working with MUW, plans were made for MSMS students to return to campus on staggered days to move belongings out of dorm residences. As they arrived on campus, students detoured to Whitfield Hall to don cap and gown and be filmed walking across the stage for their diploma.

"Then (MSMS Public Relations Coordinator) Taylor Lewis formed everything into what I thought was a really lovely video," Morgan remarked.

"It looked really good; they stitched it all together," Arnoldus said after watching the virtual graduation at home.

Seniors feel their two years at MSMS -- and their unusual semester -- have helped mold them for what's ahead.

"The academic part of MSMS especially has really prepared me with a better mentality and study habits for a rigorous academic environment," said Nguyen.

If health guidelines permit, school administration hopes to hold an in-person farewell event for seniors in late July so they can say their goodbyes.

"Our students have great resilience," said McConnell. Recent challenges, he continued, created opportunities for the school and student body to learn innovative ways of doing things.

"I think for our students, as we have told them, our world will be better in ways because of this -- to focus on what they value most, what they are most passionate about." He hopes through this experience, the graduates are encouraged to seek resolution to some of the problems they encounter, now and in the future.

"I think it's going to drive a lot of our young people, not just MSMS, to find solutions," said the director. "I think they'll be seeking solutions to some of the world's problems."