Did you know? This Columbus city official is also an author 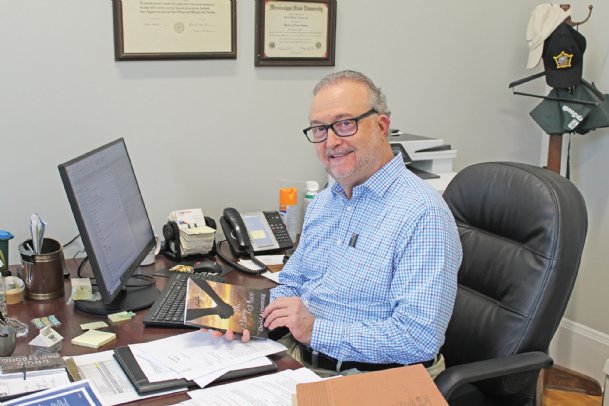 David Armstrong looks at a copy of his debut novel release, "The Rising Place," Thursday at his office at Columbus City Hall. Outside of his position as the City of Columbus Chief Operations Officer, Armstrong pens screenplays and novels. Photo by: Jan Swoope/Dispatch Staff

David Armstrong holds a copy Thursday of "The Rising Place" beside a poster in his City Hall office for the 2001 film "The Rising Place." The story originally penned by Armstrong was adapted for the film first; it has just come out in book form.
Photo by: Jan Swoope/Dispatch Staff

David Armstrong will tell you he has a real left brain/right brain dichotomy going on. By day, the City of Columbus Chief Operations Officer is immersed in local governance, budgets, meetings -- generally said to be the realm of the left brain. Outside the job, however, his mind inhabits a different world altogether -- a creative one teeming with evolving characters, plots and dialogue, even a little time travel. Welcome to the "right brain side" of David Armstrong.

The Natchez native is a writer of screenplays and novels. His debut book, "The Rising Place," published by The Wild Rose Press, is available now on Amazon and will be available by June 2 through other book sources. While most writers pen a book and hope it might make it to the screen some day, "The Rising Place" experienced just the reverse. Armstrong's historical fiction was adapted for a 2001 independent film by Flatland Pictures, featuring Gary Cole and Frances Fisher among the cast. It won 16 film festival awards before opening in New York and Los Angeles. It's currently available on DVD.

Armstrong has written additional screenplays, one of which he is marketing within the industry right now. He's also completed two other novels. One of those, "The Third Gift," is under contract for publication this summer.

If there's a writing bug, it's been with the City of Columbus' COO since his childhood in Adams County.

"I remember writing my first short story, called 'The House on the Hill,' when I was, I think, in fifth grade," Armstrong said. "I had an aunt who was a novelist who wrote Agatha Christie kind of stories and she got me interested."

Armstrong wasn't a big reader as a kid, preferring instead to be outdoors involved in one sport or another. But in high school, he discovered broad horizons in the written word.

"I started reading a lot and wrote a lot of short stories and poetry," he said. "I wrote my first novel in 1981."

Balancing a passion to write with a demanding civic career means finding what works. For Armstrong, early mornings are best for writing, rather than trying to develop his stories after a long day's work at City Hall.

"My schedule is I get up about 4 in the morning, read for about 30 minutes and write from 4:30 to 6:30 (a.m.)," Armstrong said. "I've been doing that since about 1999." He devotes most weekends to writing as well. He's inspired, in part, by William Faulkner, whom he describes as "probably my favorite writer."

"When a story or character appears in my head I'll just let it rumble around for weeks, sometimes months," he remarked. "But once I start writing, it just kind of flows."

For "The Rising Place," "I had this really vivid dream. I dreamed I was in Oxford, standing in the town square, and I saw Faulkner riding this beautiful white horse. It was very vivid. I woke up the next morning and wrote the prologue to 'The Rising Place.'

"About two or three days later, Emily Hodge (a prominent figure in the book) appeared in my head and said, you write my story," Armstrong continued. "Sometimes it's like I'm in a theater watching a movie on a big screen, and I'm just writing what I'm seeing."

He had, he said, no predetermined plan for where the story was going.

The result is described as a moving tale set against the backdrop of a small Mississippi town. In it, David, a young attorney, drafts a will for Emily, an elderly spinster. When Emily dies, David discovers a hidden box of letters from World War II. What they reveal explains why Emily lived out her life ostracized by her town, and why she died alone, but certainly not forgotten.

With two books out this season and Armstrong's first sci-fi thriller screenplay, "Playtime," on a front burner, the city official is busy before and after office hours with his "right brain" pursuits. It won't be all "ups," he might tell aspiring young writers.

"Over the years I've gotten enough rejection letters and emails to paper the walls of my office," Armstrong said candidly. One, in fact, came Wednesday. But wanting to write means always learning and growing, he said.

"I grew yesterday from that rejection," he told The Dispatch Thursday. "It hit me hard, but I learned from that. I'd forgotten don't get your hopes up too high. It's a very subjective business; it's easy to get discouraged and you just have to keep on keeping on."

One story that helps stoke the fire relates to best-selling author and MSU alumnus John Grisham.

"After he wrote 'A Time to Kill,' he was turned down by multiple literary agents until he was picked up -- and the rest is history," Armstrong said. " ... Every time you write, you learn. It's like practicing a golf swing. I compare it to that because it's a skill -- and the more you practice, the better you get."