Tasty dishes from the garden 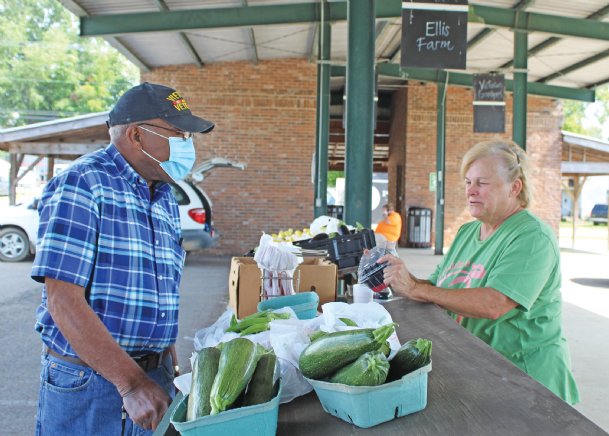 Farmers markets are a good source of just-picked vegetables, like the squash Esther Earnest brought to the Hitching Lot Monday.
Photo by: Jan Swoope/Dispatch Staff

A modest but steady stream of cars pulled up as the Hitching Lot Farmers Market opened at 4 p.m. Monday in Columbus. Monday is often a light day for the market, but those with produce to sell were kept fairly busy with customers who lined up, socially distanced, for early picks of the fresh corn, squash, eggplant, peppers, zucchini, cucumbers and blackberries available.

"My wife makes pickles with them," said Jesse Harris of Columbus, purchasing a bag full of cucumbers from Esther Earnest. She'd brought a harvest of veggies and fruit from Prospect Produce Farm located in Houston. She expects to soon add butter beans, peas, okra and another crop of peaches to the list -- plus something else the public seems eager for: tomatoes.

More than once, a car or truck pulled nearby, the driver asking vendors through the window, "Got tomatoes yet?"

"I'm hoping to bring some next week," said Earnest, "but we've learned not to predict." The retired health science educator (and MSCW -- now The W -- alumna) loves to cook with a lot of the vegetables and fruits the family farm grows and sells at a stall on the property as well as at area farmers markets. She enjoys adding her own touch to recipes. One of her favorites is baked okra.

"Lightly coat okra with olive oil and sprinkle it with coarse kosher salt," Earnest said. "Toss the okra to spread the salt. Stick it in the oven in a single layer on a baking sheet at 400 degrees for 20 minutes."

She paused to help another customer, there to purchase two bulging bags of cucumbers.

"Cucumbers have been heavy sellers this year," said Earnest. All indications are home canners are ready to produce their own pickles, plus other pickled foods that spice up family meals. (For do-it-yourselfers, one recommended source of research-based information is "So Easy to Preserve" -- book and video demos from the Cooperative Extension at the University of Georgia. Learn more at setp.uga.edu, or Amazon. For recipes ranging from hamburger dill chips to peach jam, check out Publication P0220, "Pickles, Relishes, Jellies, Jams and Preserves" at the Mississippi State University Extension Service site, extension.msstate.edu.)

Back at the Earnest homestead, Sundays nights are made for family get-togethers.

"With eight adults and four grands we have a table full," Earnest said. "Our children and spouses all cook, and we love to try new, simple recipes." She shares several favorites below.

The Hitching Lot Farmers Market at Second Avenue and Second Street North, Columbus, is open Mondays 4-6 p.m., and Thursdays and Saturdays 7-10 a.m. Current health guidelines include masks, social distancing and no touching of produce or products by consumers. For the present, produce, baked goods (primarily on Saturdays) and canned items are available. Organizers look forward to welcoming artisans back as soon as guidelines allow. For more information, contact Main Street Columbus, 662-328-6305.

Salt and pepper, to taste

(The original recipe for the peppers was a casserole. My kids suggested it would be great in the bell peppers, and it is!)