Elayne, going strong: The 'doctor of dots' is at it again 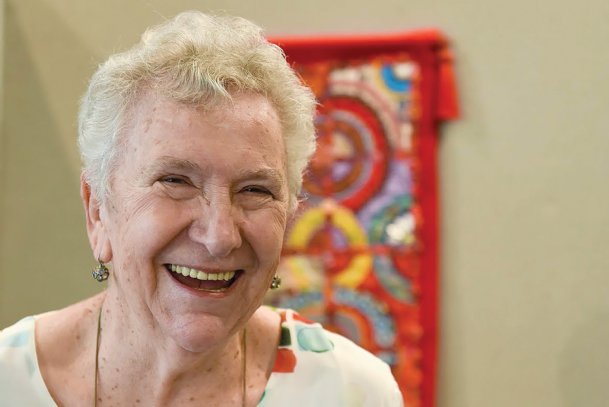 Folk artist Elayne Goodman of Columbus shares a laugh before the opening of her exhibition at the Columbus Arts Council Thursday. Whether creating unique artwork with found materials or painting objects with intricate patterns of dots, "I don't know when to quit until there's no space left," Goodman said. Photo by: Claire Hassler/Dispatch Staff

"Rare Air & Ozone" features a horse is part of the current Goodman exhibition in Columbus.
Photo by: Claire Hassler/Dispatch Staff 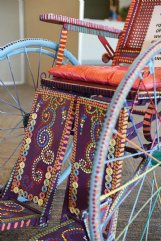 This antique wooden wheelchair, "Rolling Along," is a centerpiece in Elayne Goodman's show, up through the month of July.
Photo by: Claire Hassler/Dispatch Staff 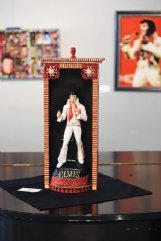 Elvis is a frequent star in Elayne Goodman's folk art. This piece is at the Columbus Arts Council.
Photo by: Claire Hassler/Dispatch Staff 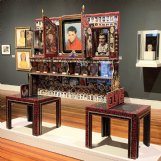 One of Elayne Goodman's tributes to Elvis, the king of rock 'n' roll.
Photo by: Courtesy photo 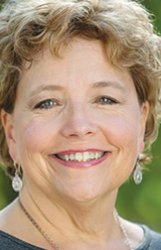 Some call her "the doctor of dots" or "the dot lady." Galleries tend to call her an acclaimed folk artist. Elayne Goodman simply carries on, determined not to take herself too seriously, turning the world around her into one of unbridled color and imagination. She does it from a rural farm in Lowndes County that's been in her family for generations. To meet her, one wouldn't realize her artwork has been in Rolling Stone magazine, handled by big-city galleries or collected by celebrities. And that's fine by Goodman, for whatever else she is called, down-to-earth and authentic should be near the top of the list.

Just turned 80, Goodman is currently featured in the largest gallery exhibition she's ever mounted. More than 100 of her distinctive works are showcased this month at the Columbus Arts Council's Rosenzweig Arts Center.

Her signature pieces are celebrations of found objects, oft-quirky marriages of nostalgia and popular culture. Many boast a technique of meticulously painting dots in inventive patterns.

The eclectic show springs from Goodman's home studio, filled wall to wall with this and that. "Usually whatever's on the top of the pile, I make something with it," Goodman laughed. She laughs often. "The only reason I can do this full time is because I can just do whatever I want to, when I want to."

"We're so excited to have this Mississippi treasure taking over the gallery this month," said CAC Executive Director Jan Miller. "Elayne is an humble soul that is bigger than life. She embodies the term 'folk art.' The only thing brighter than her artwork is her personality and the stories behind each piece."

Additional works by Goodman will be added to the show near mid-July, Miller noted.

Goodman's raw materials, the found objects, come from a lifetime of prospecting.

"For years, we used to travel around and stop at every roadside place," she said. "And I do very well at Habitat (for Humanity ReSale Store) and Palmer Home (Thrift Store). I haunt those places." Kind friends and strangers alike also send her goodies to use in ways only she can concoct. An antique wheelchair, a kitschy statue of Elvis, an old walking cane are all potential masterpieces in the making.

Pete Goodman, Elayne's husband of 61 years, has been her partner in adventure.

"Oh, we went to a lot of flea markets, auctions and yard sales," said Pete. "We'd just load it up and haul it home."

His wife explained, "When I see something I know if I should buy it or not. I just have an instinct to buy it, when I have no idea what I'll do with it."

Goodman chuckled about buttons, one of her frequent artistic mediums.

"We bought so many buttons we would have to drive the car up to the space to load them," she recounted. "It's sure good we did, because there are not many large quantities of buttons any more. And if you have to buy some at a fabric store, they're expensive. What used to be 39 cents is now $5.98."

After entering a career in nursing in her 30s, Goodman thought that would be her future. But during a hiatus, a ceramics class at Mississippi University for Women opened a different door. Eventually, she would earn a Bachelor of Fine Arts degree from The W.

"I had no intention of attempting to sell my artwork, or even showing it outside family and friends," Goodman shared in her biography on the website of the Kentuck Art Center in Northport, Alabama. Two of Goodman's professors, Eugenia Summer and Mary Evelyn Stringer, had other ideas.

"(They) took slides of my work and contacted a gallery on my behalf," said the artist. "When the gallery sold my first piece my fate was settled."

Going public can be intimidating.

"It's just like appearing in public nude -- when you first start putting your artwork out there," Goodman told Mississippi Folklife in 2013. "You really are showing people your soul, it's beyond what's on the outside. You are showing people what your insides are really like, and it's very different at first. But after (selling my first piece) I lost all fear of what anybody must think or care."

What followed was a widening reputation for Goodman's unique style. She and Pete took to the road as she was accepted into high-profile events including Kentuck Festival of the Arts and Folk Fest in Atlanta. Exhibitions, articles and requests to speak to groups followed.

Along the way, she acquired that "doctor of dots." It happened after a surprising phone call a decade ago from then-MUW president Claudia Limbert.

"I don't know who nominated me, but Dr. Limbert told me they wanted to give me an honorary doctorate, and I like to fainted. It was just absolutely unbelievable," Goodman said.

When a fellow artisan at Atlanta's Folk Fest learned of the honorary Doctorate in Contemporary Art, he painted a special sign for his friend.

"After we came home (from the fest), he sent me a lovely piece he'd painted: Doctor of Dotology," the celebrated artist said with a grin.

Goodman stays closer to home more now but still speaks to groups and is hospitable to visitors and collectors who want to see her home studio -- including a near 200-foot embankment behind the house she has transformed into a shrine to found objects.

And she keeps creating.

"She amazes me quite regular," said her husband. "She'll always come up with something. It just comes out like an overflow well."

His artistic spouse said, "I'm grateful to be 80 and still able to do this."

When asked what the public doesn't know about Elayne Goodman, the longtime artist was momentarily stumped.

"I feel like I'm an open book," she began. Then, after a pause, "I'm a workaholic; I don't know if people see that or not. I can't just sit around and do nothing. That bothers me so much, to see people waste their lives, like on their phones, when they could be doing something wonderful."

Of her prolific works, Goodman said, "I try to do something that the average person can buy, and I don't care if it's in an art museum 50 years from now or not. If it makes someone happy right now, that's enough."

Editor's note: The Columbus Arts Council's Goodman exhibition is up through July at 501 Main St. Her work is also carried by The Attic Gallery in Vicksburg and Kentuck Art Center in Northport, Alabama.