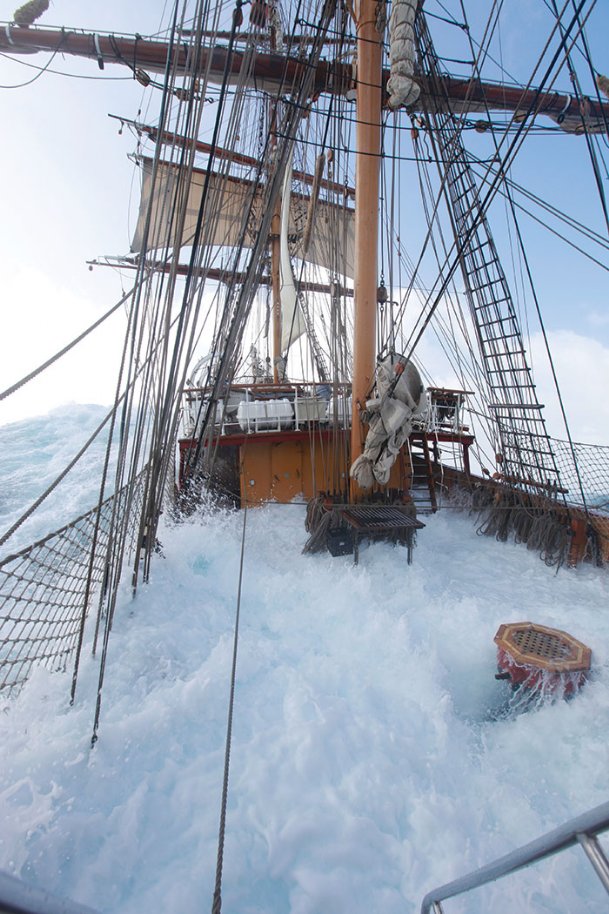 Europa's decks are awash as the ship and its crew travel in a storm in February 2018. This photo was taken approximately halfway between Ushuaia, Argentina and Antarctica when Columbus native Sid Imes came on deck for his turn to steer the ship. Photo by: Courtesy photos/Sid Imes

Sid Imes, second from left, stands with two members of the team stationed at the Ukrainian Vernadsky Research Base. Team members spend six to eight months at a time at the base, which also contains a small bar.
Photo by: Courtesy photos/Sid Imes

Europa's passengers and crew visited penguin colonies that numbered in the thousands while in Antarctica.
Photo by: Courtesy photo/Sid Imes

An old, weathered whaling boat sits at Whalers Bay near Deception Island in Antarctica. Beginning in the early 1900s, the bay was used by whaling, mapping and scientific expeditions.
Photo by: Courtesy photo/Sid Imes 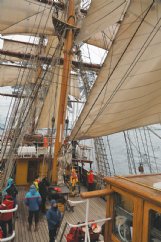 Sailors on the Europa to Antarctica were divided into crews, taking rotations to steer and watch for icebergs.
Photo by: Courtesy photo/Sid Imes

Sid Imes/Special to The Dispatch

The wind is blowing steady, 65 knots and gusting higher. Waves are in the 25- to 30-foot range and the rain is blowing sideways. The spray is stinging any skin that might be exposed -- which is very little as the temperatures are now below freezing. Everyone on deck is wearing full foul weather gear and ski goggles to protect the eyes. Under my rain suit I have on five layers of wool, two wool hats, knee-length snow boots and heavy ski gloves. I have been on watch for only 30 minutes and the cold is seeping through to my skin. The cold is uncomfortable, but the sound of the wind shrieking through the rigging on a sailing vessel at just below hurricane strength is horrifying. The sound reminds me of a symphony written and performed by the devil himself. Along with the pitching and rolling of the boat there is a foot of water rushing across the decks every 30 seconds or so after another mountainous wave slams into the side of the barque. We are just south of Cape Horn in the Drake passage, the body of water between Antarctica and South America, one of the stormiest ocean passages on the planet. I am wondering what in the world have I gotten myself into this time.

Starting in high school, I read every book I could find on the explorers, the adventurers, the long-distance sailors, the mountain climbers. But the polar explorers fascinated me most.

Once I was in Oslo, Norway, and visited the maritime museum. In one building was the Fram, the sailboat that took Amundsen, his crew and dogs to the South Pole. I spent hours on board studying every feature of the boat, marveling at the size of the timbers that went in to the building of the boat designed to withstand the pressures of being frozen for a winter in the ice. That day I knew that at some point that I would sail to Antarctica.

I spent several years sailing around the world. While in New Zealand I met a fellow sailor that sailed his boat to Antarctica and later wrote a book about his adventures. I never got to sail my own boat there. There were too many ways to die doing it on my own. Antarctica is one the most inhospitable places on earth.

I found a boat called Europa, a 150-foot barkentine built in Germany in 1911, that started life as a lighthouse ship but was converted into a passenger ship for trips of up to six weeks. Every year this large sailing ship makes three-week trips to Antarctica, leaving from Ushuaia, Argentina. The journey includes five days sailing there, then nine days at the Antarctic peninsula before sailing back.

I arrived in Ushuaia on Feb. 5, 2018, a day before the Europa was scheduled to depart. I threw my bags on board and was shown to my cabin, a small room with six bunks. My four roommates included a Russian, two Europeans and a guy from Australia. The room was tiny, with a bathroom and shower.

The next day we motored away from Ushuaia, and for nine hours we were in the calm waters of the Beagle Channel which leads to the Atlantic Ocean. We were given a safety briefing on lifeboats and man overboard instructions in case anyone went over the side. Being told that if we fell in we would likely only last a few seconds due to the freezing water got everyone's attention. We were split into three groups of nine people. Each group took rotations steering and watching for icebergs.

Europa cleared land and headed due south. Later that night, we cleared Cape Horn, that feared landmark where hundreds of sailors for centuries had lost their lives due to stormy weather and poor navigation.

For the first two days, wind and currents were favorable and the sailing was comfortable; we made good time. Occasionally we would be visited by seabirds, including wandering albatross, with wingspans of up to 11 feet.

On day three we were told that a deep low-pressure system was moving in and the weather would worsen. We were all given safety harnesses to wear at all times while on deck. When moving about, you would clip onto anything stable to keep you from falling overboard when the ship heeled over after getting hit by waves or a sudden gust of wind.

Wind and waves steadily increased to 50 knots, just shy of hurricane force. The waves were mountainous, 20 to 30 feet. The decks were awash, completely covered with water. The old ship would groan and creak, and the sails would spill their wind. Mast swaying, she would slowly rise, shaking the water off only to be met with another monster wave. I was steering through the worst of the storm, frightened for the ship and my life. I looked at the captain and crew, who were busy tending to the sails, checking ropes. I was looking for fear or any sign in their faces that we were in danger, but there was none.

The young crew, in their old woolen sweaters and thin sea coats, were quietly going about doing their business as if this was just another day on the sea. From that point on, I hung on, took my watches and tried to enjoy the ride as much as I could before getting off duty and having a steaming cup of tea, then curling up in my bunk with most of my wool clothes and sleeping.

For those that were not too seasick to eat, food was served three times a day, cooked by an old thin woman from the Netherlands with a cigarette dangling from her lips constantly, and her crew of two. No matter how rough the seas, there was always a steaming hot meal and fresh baked bread, salads or fruit. To get to the galley you had to walk down a narrow hallway, which at times listed 45 degrees. They would look at your face and try to determine how sick you were and give you proportions accordingly. The only way to keep your balance and hold on to your plate was to wedge yourself against the walls.

After a couple more days, I woke up and the boat was not rocking. There were no crashing sounds from the deck, only the sound of water gently gurgling along the hull as Europa silently sailed into a peaceful harbor. We were, at last, in Antarctica.

For the next nine days we sailed to new harbors every day. After the anchors were down, the small boats would be lowered to the water, and we would visit penguin colonies, which at times contained thousands. We saw old abandoned whaler huts which were still intact, as if the inhabitants were in a hurry and just left suddenly one day. Cabins were still stocked with food on the shelves. Small whaling boats and all the tools for processing the unfortunate whales they captured were scattered about.

We visited Argentinian, English and Russian research stations. The men who manned these spent three months in the summer, gathering information on the environment and climate change. There was even a small British museum with seven British females living on a rock the size of two big swimming pools.

Other times we would anchor near icebergs which were the size of buildings. Occasionally pieces would break off, making loud crashing noises and creating big waves in the harbor. Sailing from harbor to harbor, we would bang into smaller icebergs which were unavoidable but caused no damage to the ship's hull. The icebergs were amazing and had different shades of blue and green and, of course, a lot of white. Curious blue whales and seals would swim near the boat for a look, but slowly swim away after getting bored.

All too soon, our time on the "Ice," was over and we started our sail back to South America. This leg of the voyage was not nearly as rough as the trip down, and after six days we were tied up to the wharf in Ushuaia.

As I write this, Europa is on the way back to her home port in the Netherlands, having canceled its remaining voyages for the year due to the coronavirus. They have been sailing 61 days nonstop out of South America, with a few hundred miles and an uncertain future in front of them.