In the garden with Felder: Of growing and giving thanks 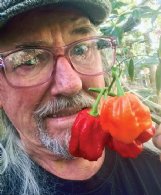 Felder Rushing holds Scorpion peppers; they're not to be trifled with.
Photo by: Felder Rushing/Courtesy photo

I barely survived a potent scorpion this week, in my kitchen which is as experimental as my garden.

It started with me fiddling with a recipe, which is nothing new. Starting with the plain fare of our country's first Thanksgiving feast, we've added and substituted new ingredients to fit our situation. Sometimes they work, sometimes not.

The latter nearly did me in this week, in my continuing Covid-lockdown inspired quest to conquer my cabin's tiny kitchen. I tried a new twist on my special jalfrezi, a thick, spicy curry dish with hot peppers.

I try to include homegrown herbs and spices whenever I can, working in new varieties of staples such as garlic, okra, tomatoes and peppers. But my most recent mistake was substituting a few slivers of a squat little pepper known worldwide as the Trinidad Scorpion, the second hottest pepper on earth (behind the Carolina Reaper).

Its sweet, fruity flavor is hard to detect when you're gasping for breath; it is so pungent, just cutting mine open released a fiery piquant gas that nearly ran me out of the kitchen. For comparison, according to standard Scoville Heat Unit tests, jalapeno peppers are considered very mild; Scorpions are over a thousand times hotter.

Had to wash my hands three times to get rid of the oil from just handling the pepper, and I had to keep my face away from the capsicum-caustic steam coming from the oil I was sauteing the pepper in. Luckily, I knew that the pepper oil heat is tempered a bit upon cooking, and that the mouth burn generally subsides within a few minutes. And let me tell ya, the flavor was exquisite, plus the lingering endorphin buzz was worth it all.

This brings me to replacement foods just before a special harvest festival. The foods with which we modern Southerners celebrate Thanksgiving are quite different fare than what the Pilgrim settlers and their Native American neighbors scraped together.

Almost four hundred years ago, the participants of this pan-cultural get-together shared what they could grow, forage, fish or hunt. There were game birds, smoked fish, shellfish and venison, with side dishes of native beans and squashes, and autumn-fresh or dried fruits and nuts including onions, turnips, tart cranberries, walnuts and chestnuts.

A thick mush was boiled from flint corn which, because the settlers' sugar was long gone, was probably sweetened with molasses which the Native Americans had long learned to cook down during the spring's maple sap flow.

There were no potatoes, no sweetened cranberry sauce or cornbread dressing. They didn't even have pies, because there was no butter or wheat flour for pastry crusts. Pumpkins were likely baked with their innards blended with herbs and nuts, and their seeds were roasted.

Since then, while attempting to keep America's most renowned feast true to its humble beginnings, we have embellished a bit. Here in the South, in our "make-do" spirit, we now traditionally include five highly-revered local crops that come into season about now: Native pecans and persimmons, sweet potatoes, ham, and either sorghum or sugar cane molasses. Nope, not gonna mention squirrels or 'possums.

By the way, do you know how to predict the winter from the spoon, knife, or fork shape found in split persimmon seeds? Ask an old timer for the details.

Come Thanksgiving, I'll roast a few of my sweet potatoes until creamy, blend in this year's cane molasses, and top with Delta-grown pecans. Spoon the sweet baked dish beside a slab of ham or turkey, add cornbread dressing with homegrown herbs, slices of my own tomatoes, tangy homemade bread-and-butter pickles ...