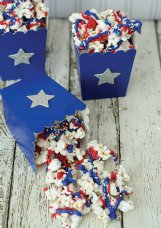 Here's an easy inauguration day snack to enjoy while reading up on some of our former presidents' inaugural luncheons and mishaps.
Photo by: www.pinterest.com

Inauguration Day 2021 will be like no other. COVID-19 and events before, on and after Jan. 6 have made sure of that. Dwelling on it could render us chronically disheartened. But what if, instead, we focus on the very fact that, in spite of every challenge, America today celebrates a hallmark of its democracy. The pomp and circumstance may have been trimmed, but the essence of what our inauguration represents holds firm.

On a practical level, food has long played a role in this major transition. In recent times, a celebratory inaugural luncheon has become tradition. The pandemic, however, has caused the Biden/Harris luncheon to be canceled in the interest of health safety. After reading that a panel of chefs would host an event titled Presidential Soul on Zoom and celebrate by making recipes from some of the culinary professionals who have worked at the White House, I became curious about inauguration meals of the past. A sampling of the search results was entertaining.

In a history of inaugural food by Rachal Nania in 2017, Alison Kelly, a research specialist at the Library of Congress, tells us that after Andrew Jackson was sworn in as the seventh president in 1829, about 20,000 people followed him back to the White House. Jackson's kitchen staff brought out barrels of spiked orange punch and chaos wasn't far behind.

"Buckets were spilled, glasses were broken," Kelly said. Jackson eventually slipped out a back door and ate his inaugural dinner in peace at a boarding house.

"After a couple of hours dancing, they announced the buffet, and people just rushed the buffet, grabbing all of the food and shoving each other," shared Kelly.

Roosevelt requested chicken a la king from the First Lady's housekeeper and cook, Henrietta Nesbitt. Nesbitt, a notorious penny-pincher, refused, declaring she could not keep the food hot for 1,800 people. She switched to cold chicken salad on a lettuce leaf and cake with no frosting, Kelly said.

Event toastmaster George Jessel is said to have asked in his speech at the luncheon, "Mrs. Roosevelt, how did you manage to make chicken salad with so much celery and so little chicken?"

Jimmy Carter in 1977 canceled his luncheon, opting instead to walk the entire parade route and throw informal parties instead of elaborate inaugural balls. Even the parties were low-cost, Kelly said, with pretzels and peanuts served.

Recipes for some of our former presidents' favorite foods can be found online. Their likes and dislikes make interesting reading. Rather than a complicated dish favored by William Taft or Gerald Ford, however, here's an easy snack suited to the day. For "inauguration popcorn," all you need is popcorn and candy melts. Spread 4 cups of popped popcorn out on a baking pan or wax paper; drizzle 1/2 cup of melted red candy melts and 1/2 of blue over the popcorn. Cover it all with red and blue sprinkles. Let it set a bit, then serve it up in a bowl or individual containers while counting yourself fortunate to live in the United States of America.