A 1-minute gazpacho and a versatile take on sushi 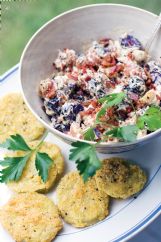 When I was growing up in Virginia, one of the signs of summer I anticipated most was the appearance of fat green tomatoes on the vines in our garden. We picked them well before they started to blush, dipped the thick slices in egg and milk, dredged them with cornmeal, salt and pepper, then fried them in a skillet.

Moving nachos out of the microwave, onto the grill

A pasta dinner in the time it takes to boil water

Just peachy: Oh, what you can do with this season's fresh peaches

Even though fruit and cheese tend to go together like soup and sandwich, the first time I saw watermelon and feta cheese paired up on a menu it struck me as very odd.

Flair on the Fourth: There's still time to add patriotic pizazz to your holiday table

So, you've been too busy washing sand out of vacation swimsuits to plan much for the Fourth of July. Or, maybe you've been putting in so much extra effort at work so you can actually be away from the office tomorrow you've not had time to dream up a holiday menu. Perhaps you just need a little special something to take to a gathering of family or friends. Well, don't fret.

A fried chicken so good it's worth making at home

Pickin' time: Blackberries are ripe in Caledonia -- get them while they last

Summer days begin early for Rissa Lawrence of Caledonia, especially when her near 500 Kiowa blackberry plants come into their full glory. That's when the retired educator opens her Victorian Place Garden for pick-your-own enthusiasts to enjoy the harvest.

A coconut and berry no-bake pie for July Fourth

Just because summer seems to scream for pie doesn't mean we are eager to crank up the oven. This is especially true at the Fourth of July, when we'd rather focus on the grill and preparations for fireworks. 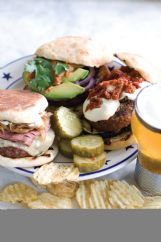 10 ways to tart up your basic summer burger

A trio of summer salsas, no tomatoes needed

Who says salsa has to be made from tomatoes? Or dumped unceremoniously from a jar?

Young cooks had a hard time containing their excited anticipation Friday afternoon while waiting for parents to arrive at Mississippi University for Women's Culinary Arts Institute. It was demo day, the last day of their week-long adventure at culinary camp, and they were eager to show off what they had learned.

Putting a healthy spin on the popular fish taco

Here's the latest goal for food makers: Perfect the art of imperfection.

In case you hadn't noticed, Father's Day is just around the corner. On Sunday, June 16 families everywhere will celebrate dads, and many of them will do it with some form of feasting on manly foods. Dude food, if you will.

A fresh take on Father's Day surf and turf