A wee taste o the Irish

It never fails. When St. Patricks Day rolls around each March, it seems there is a touch of the Irish in all of us. 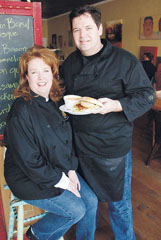 You may have seen them in gift and specialty shops. Small brown packages filled with big taste and boasting eye-catching yellow and red labels reading Ala Carte Alice.

There are any number of things teenage boys might be doing on a Saturday morning  sleeping in, playing video games, shooting hoops. But on at least the third Saturday of every month, one group of young men is busy giving back to the community.

With four days to go, the rumble of Super Bowl XLIV is reaching fever pitch. Colts and Saints fans have proudly lined up behind their teams, and many who wont be in Miami for the showdown are busy planning their ritual gathering around the television.

The Golden Triangle Celts celebration in Starkville Saturday would have pleased The Bard himself. And we dont mean Master Shakespeare. In Scotland, that title refers to 18th-century poet and lyricist Robbie (or Rabbie) Burns, voted in 2009 by that nations people as the Greatest Scot  narrowly edging out patriot William Wallace in a poll conducted by Scottish Television.

What a crock!: Move over pot roast  just look what a slow cooker can do

Ever since the Rival Company bought Naxon Utilities 39 years ago and reintroduced its all-purpose cooker under the Crock-Pot name in 1971, Americans have carried on a love affair with their slow cookers.

From rich cream soups like bisques and chowders, to lower-calorie broth-based consommés, wonderful soups are a great way to warm up through the long, cold days of winter. So its no wonder the soup industry taps January as National Soup Month.

Traditional turkey with all the trimmings is a popular choice for the holiday table, with the added bonus of leftover turkey for sandwiches, soups and casseroles.

Sterling starters: Quick, tasty appetizers are a holiday favorite for this great cook

Janey Stubbs of Starkville is a fan of delicious appetizers that can be made up in quick order.

Few things inspire a bona fide candymaker like the holidays. For Jeanette Basson, the advent of Thanksgiving and Christmas sends her straight to the high-ceilinged kitchen of her familys 1835 Lowndes County farmhouse near the Alabama state line.

As a young girl, Jean Wilder remembers her mother baking apple crunch pies for the Country Store Bake Sale. It was only one of the delicious homemade goodies Laura Pennington made to support the preservation of the historic Stephen D. Lee Home at 316 Seventh St. N.

For Debbie Gibsons extended family, Sundays at the dinner table strengthen the ties that bind

Once upon a time, big family-style Sunday meals were the rule rather than the exception. Aromas drifting from moms or grandmothers kitchen promised delicious home-cooked dishes, hot from the oven. Children, changed out of their church clothes, romped and played, before being told to go wash up.

Where does food come from? Preschoolers learn from the ground up

The growing season may have come to a close, but the knowledge gained by a new crop of very young hands-on enthusiasts will hopefully last a lifetime.

In a show of community unity, school students, university faculty, area artisans and other caring individuals have pitched in to make more than 500 ceramic bowls for the Nov. 7 Empty Bowls event to alleviate hunger.

Mother and daughter partner as wedding caterers  and so much more

While its not unusual for blushing brides and dashing grooms to tie the knot or hold their beautiful receptions in some of Columbus gracious antebellum structures, what has evolved at Shadowlawn is a bit out of the ordinary.

A home for the heart: For Linder Burt, recovery leads to a new home and ideal job

For Linder Burt, preparing lunch and supper for a dozen adults every day isnt a hardship; its a life-saving blessing. As head cook at Recovery House, a substance abuse treatment facility for women, Linder brings very personal insight to the unique environment. Only 18 months ago, she herself arrived homeless and helpless at the Lowndes County agency, in dire need of treatment.

As chair of the committee planning and preparing goodies for the Columbus Arts Councils gallery receptions, Beverly Norris is always on the hunt for pick-up treats gallery-goers can enjoy as they stroll through the show. And, tying the refreshment table to a theme is her specialty.

You wont hear him bragging, but Nathan Best may take a prize for remarkable restaurateur stories. The affable Columbus resident with a ready smile is a past member of the OJays and the Fairfield Four, a Grammy winner for his part in the O Brother, Where Art Thou soundtrack, a pastor, a Christian supply store owner and purveyor of island cuisine at the Trinity Caribbean Café.

On the go? Try these recipes to get you in and out of the kitchen

Whether its football or soccer games, cheerleader or dance team practice, civic meetings or simply long days at the office, most families are on the run more often than they like. The frenetic pace often dooms family time around the table or kitchen counter.

With about 72 hours left on the SEC season count-down clock, tailgate pros and red-shirt rookies alike are looking forward to major game day munchies. For many, a game is not a game unless a tailgate spread precedes it.