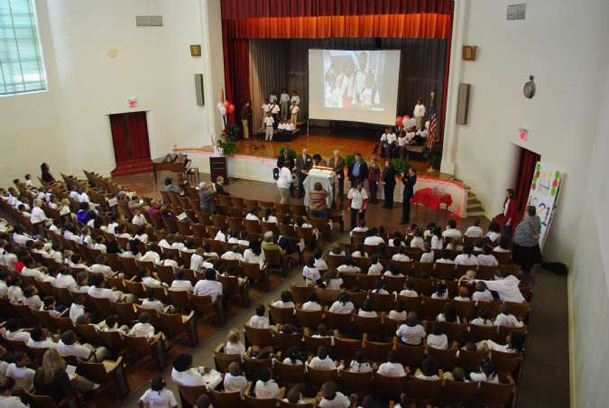 Half a century ago, no one would have given a second thought to Curtis Collums making his way to the playground at Franklin Academy with dozens of smiling children.

Collums spent 21 years as school principal at Franklin (1956-1977), before retiring, and playing with the children was his favorite pastime.

"I would get out there and play ball with them," Collums recalled Friday at the school. "I always played with the children, and that''s what I remember most."

Collums, other former administrators and past students looked back on their time at the school, Friday morning, as Franklin Elementary Medical Sciences and Wellness Magnet School celebrated 190 years of educating children.

Franklin was the first free public school in the state, Collums noted, making it a trailblazer for Mississippi.

"It was far ahead (of the times), as far as Mississippi," he said.

"Columbus has always believed in education, said Barbara Yarbrough, who attended Franklin from 1944-1950. "Maybe that''s what instilled in me a love for school."

Coming "from the country" in Steens, Yarbrough didn''t have playmates her age, so she relished the opportunity to go to school, not just for academics, but also to socialize.

"I was just tickled to be in school. I loved school," she said. "I loved school for the social contact. I just can''t imagine not loving school."

"The fondest memories were the children -- seeing them every day, greeting them in the morning, the activities that we did," Sanford said.

Before Friday, it had been six to eight years since the last time Sanford visited the school.

"I''m excited to see the magnet school with the health and wellness theme. That''s exciting for them and the community, as well," said Sanford. "It''s always good to get to see old friends and look at the building again."

From the outside, Yarbrough said, the building looks the same.

Special education teacher Jonathan Green climbed a ladder to the tower ring the school''s bell, after the celebration ceremony. It was the first time he had heard the bell ring.

"It was fun," said Green, joking he might start ringing the bell daily.

"One of the former principals used to ring the bell every day," noted Debbie Parker, school secretary.

The 190th birthday celebration was postponed to Friday, after school closed due to weather, Thursday.

Students marked the anniversary with a reading of the school''s history and choral selections. Students also sang "Happy Birthday" to their school, before a massive cake was cut in honor of the anniversary.

On display at the celebration were year books, pictures and newspaper clippings from throughout the years.

"I think we had a great day," said Patricia Overstreet, school principal. "We had three former principals here that toured the school afterward. We had time to share the past and get input for the future."

The school already is planning for its 200th anniversary celebration.