Race of superintendent not a factor in West Point 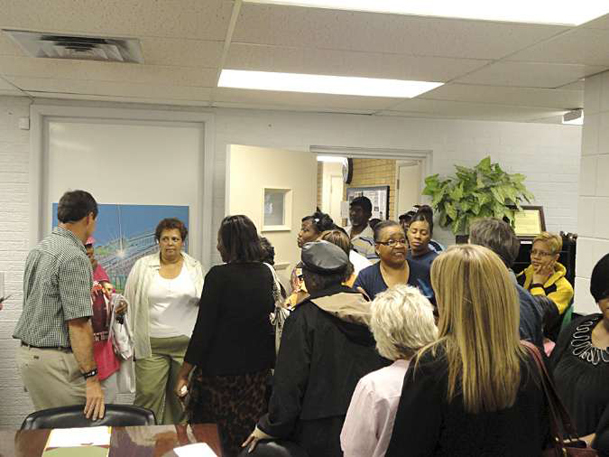 WEST POINT -- More than 50 parents swarmed Monday''s meeting of the West Point School Board demanding a greater role in choosing the district''s next superintendent.

Following a report and an editorial in The Daily Times Leader describing the parents'' intent to boycott the school district if a black superintendent is not hired after Steve Montgomery steps down in May, the parents did pack the central office to voice concerns. But those concerns did not center on race and a boycott was not in the plans.

Clay County Election Commissioner Wendy Fuller, whose son attends West Point High School, said a boycott was never considered Thursday when the parents met at a West Point church to discuss concerns. She said the story of a 1996 boycott against the school district which forced a past superintendent to step down was recounted, but only as a reference to the power of motivated parents.

Regarding the race of the new superintendent, several parents said the issue was moot as long as he or she is both qualified and capable of leading the district. And they said the same goes at West Point High School, where principal Alvin Taylor will resign at the end of the year to take a job as superintendent of Meridian schools.

"The race card is not being played. All we ask is fairness," said Mary Turner, mother to one district student and two graduates. "We''re looking for someone who has the children''s best interest at heart and can stand on their own and not be swayed by politics."

"(Taylor) announced he was leaving in February. Why has the position not been advertised?" asked Louise Adams, who has one child in West Point schools. "It''s not a race issue."

"Race is not the primary factor," said Carolyn Poston. "We just want to be involved. We''re asking the board how much involvement it will allow."

Poston''s motives, however, have been questioned by several people who claim she has emphasized the hiring of black candidates on multiple occasions.

Witnesses claim Poston spoke publicly at a previous school board meeting demanding a black superintendent and later sent a letter to School Board President Gene Brown restating those demands.

"I did not demand anything," said Poston. "I addressed a letter to Mr. Brown and it is between he and I."

Despite Poston''s alleged demands, the crowd of parents was more concerned with information.

Following the conclusion of the board meeting, several parents asked the board where it stood in the process of narrowing the pool of 17 applicants for superintendent to several finalists who will be interviewed.

Brown answered that neither the board nor the Mississippi School Board Association, which is conducting the superintendent search, have recommended any finalists. But the board did vote to hold a special meeting April 18 at 5:30 p.m. to discuss the interview process.

The majority of the special meeting will be held in executive session.

"We''re not looking at anyone that''s not qualified," Brown told the crowd.

Following the meeting he stated the board could not discriminate on the basis of race if it wanted to. He said he believed the majority of the parents are not demanding a black superintendent, but some are.

"(Parents) will just have to trust we''re going to pull in the best superintendent we can for our students," he said.

Regarding the search for a new principal at WPHS, Brown said the issue is a personnel matter and the board could not discuss it with parents.

Following Monday''s meeting, Fuller criticized the school board for not meeting in a larger room -- the central office board room seats approximately 20 -- so all interested parents could attend and hear the school board''s words first hand instead of being forced to wait on the minutes of the meeting to be made public or receiving information second hand. Communication, she said, is at the heart of the matter.

She also panned the board for not having narrowed the field of 17 applicants for superintendent with only one-and-a-half months remaining in Montgomery''s tenure.

Several parents said they would like a more active role in determining the next superintendent, but if that''s not possible, they want more information about the candidates.

Focus groups were conducted with parents prior to applications being accepted to determine what they wanted from their new superintendent. Experience was a great concern, but parents would like to know what school district the candidates come from to compare its academic standing with West Point''s

Parents also frequently requested someone from within the district. Taylor was reportedly interested in the position before choosing to go to Meridian, leaving Assistant Superintendent Robin Miles, South Side Elementary Principal Burnell McDonald and Federal Programs Director Tim Fowler as local candidates.