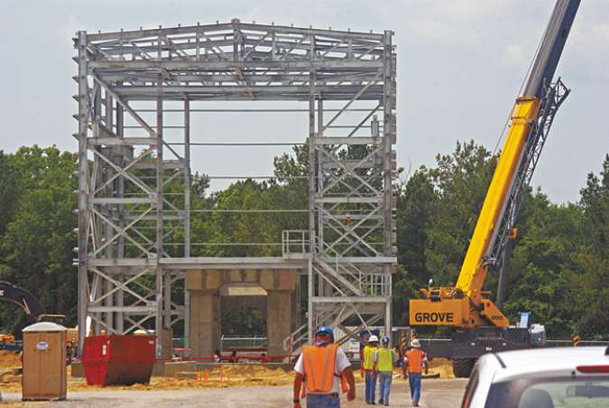 Construction workers participating in the groundbreaking ceremony for Kior return to their work. Photo by: Kelly Tippett 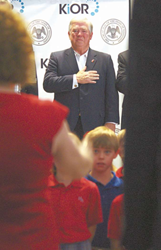 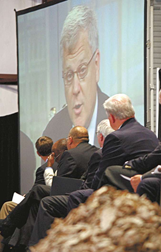 Through video, U.S. Rep. Alan Nunnelee, R-Tupelo, speaks to officials and those attending the groundbreaking ceremony at Kior.
Photo by: Kelly Tippett

FedEx is the latest company to sign an offtake agreement with Kior, a biofuels plant slated to begin production in Columbus in 2012. FedEx plans to use oil produced from biomass, mainly wood chips, in its ground fleet.

The Hunt Oil Refinery in Tuscaloosa, Ala., and Catchlight Energy, a joint venture between Weyerhaeuser and Chevron, also have entered into agreement to use oil produced at Kior, Gov. Haley Barbour announced Thursday, during a symbolic groundbreaking at the Kior site. Work began a few months ago on the Kior site at the Columbus-Lowndes County Port.

The facility represents a $190 million local investment with more than $500 million to be invested statewide, as the company adds four more plants in Newton, southwest Mississippi and two additional locations yet to be named.

Initially, the Columbus facility will turn 500 tons of biomass a day into 11 million gallons of oil. The oil can be processed at refineries with other oil or put directly into gas tanks, Barbour said. The company plans to refine the oil into gasoline and diesel fuel blendstocks at the Columbus facility.

"This is an unbelievable accomplishment, and it''s a game changer for our country," he said.

Barbour recalled when the idea was first presented to him. The notion of turning wood chips and agricultural waste into fuel sounded like the alchemists of old claiming they could turn straw into gold.

"It''s almost like making gold out of straw," Barbour said of the technology, which reduces nature''s process of breaking down biomass over the course of decades into a matter of seconds.

"It does sound like science fiction, even though I have explained (the process) a number of times," admitted Fred Cannon, CEO of Kior.

Lowndes County Board of Supervisors President Harry Sanders was in the oil and gas business for more than 30 years before retiring, he told audience members.

His father thought he should learn every aspect of the business, including driving trucks full of oil to and from Meridian.

"I can remember seeing all the pine trees in Kemper, Oktibbeha and Lauderdale County," Sanders said. "I never in my life would have thought trucks would be hauling pine trees in a truck as a liquid, as black gold."

Sanders credited Barbour and Columbus-Lowndes Development Link CEO Joe Higgins with another successful project, as well as a boom of economic development.

"He''s changed our attitude," Sanders said of Higgins. "We had all the resources here; we just didn''t know how to use it."

While U.S. representatives and senators could not attend the event since Congress is in session, Sens. Thad Cochran and Roger Wicker and Reps. Alan Nunnelee and Gregg Harper shared their remarks via video.

HOW THE REFINERY WORKS

How the KiOR refinery in Columbus will work:

Â· Once wood chips arrive at the plant, it is "processed and conditioned" for conversion into oil.

Â· The wood is fed into a reactor, where it interacts with a catalyst in a process similar to "cracking" at a traditional refinery.

Â· Renewable crude and byproducts are sent to a Product Recovery unit where they are cooled and separated. The crude condenses into liquid, while light gases are transferred to a cogeneration facility where they are burned to generate electricity.

Â· The crude will then be refined at the Columbus Kior facility into "gasoline and diesel fuel blendstocks on site using standard refining equipment," the company said.