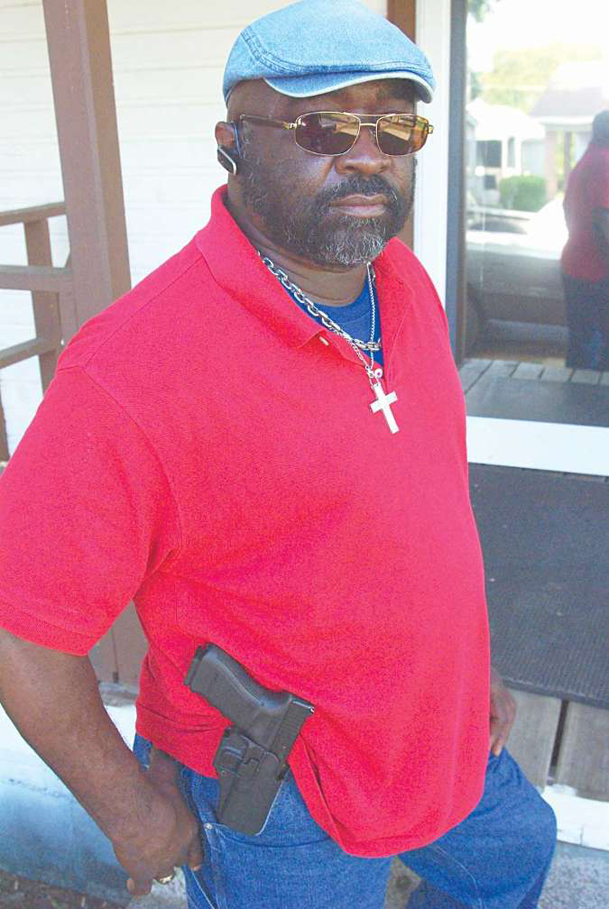 Dawson Johnson stands at his doorstep with his pistol holstered on his hip. Photo by: Kelly Tippett

Mississippi House Bill 506 was recently amended to allow specially permitted individuals to carry concealed weapons in places once off limits, like college campuses, bars or churches. Additionally, all prosecutors and public defenders can carry a concealed firearm during the workday, except in a courtroom that''s in session.

The bill passed in March and went into effect on July 1.

The new law conflicts with current campus policies that ban firearms unless in possession by on-duty police officers. It also clashes with an older state law that prohibits guns on campus.

Depends on who you ask.

"Even though you're permitted to carry it inside a church, if they say no guns allowed, an advanced permitted person has to respect those wishes of the business or entity," Mississippi Department of Public Safety Public Affairs Director Jon Kalahar said.

MSU spokeswoman Maridith Geuder said "Mississippi State has a policy that prohibits any kind of gun from being on campus. That policy will be in effect regardless of the law."

"We're gonna enforce the state law, whatever that is determined to be," Lindley said. "We're in the process of getting a clarification."

Clarification on the law?

The Mississippi College Board is expected to ask the state attorney general for an opinion. The timetable for clarification is unknown.

The attorney general''s office could not comment on its communications with the College Board. At this point, there are no opinions written about House bill 506.

"This bill was passed before we could have any say so about it," MUW Police Chief Kennedy Meaders said. "Somebody felt people on campus needed to start carrying firearms. (The) only thing we can do is go by what the law says. It's already law now."

Meaders said MUW could require students who have special endorsement to register their firearms with MUW police. MUW officers also will get extra use-of-force training and decision-making training.

"Still, it's going to create some different situations for us," Meaders said.

Students run the risk of expulsion if they violate campus gun laws, but with an open campus, the threat doubles with visitor traffic.

Meaders said his department had one incident involving a gun on campus last year, but calls regarding firearms are rare.

"I am assuming students will not carry a gun on campus," Lindley said. "We had move-in day Wednesday, so we really need this clarified for our students and general population."

Like Meaders, the Department of Public Safety was caught off guard by the legislation. The department had to find a new safety plan and qualified instructors, ultimately settling a course and seven instructors from the National Rifle Association. Originally, the Department of Public Safety wanted to use a 16-hour course, split over two days, to acquire the new permit. But after meeting with the governor's office, officials bumped it down to eight.

The permit process has been in place since Aug. 1.

"It didn't get much publicity going through the legislative process," Kalahar said. "Once it went into law is when we found out about it. It was originally encouraged by attorneys that wanted to be able to protect themselves, but I anticipate it will get some tweaks coming up in the next legislative session (in January)."

In favor of the law

With the congested circuit court system, it is a good idea for lawyers and even judges to carry firearms, said Columbus bail bondsman Dawson Johnson.

"If they had their weapons, incidents could be avoided. Seeing security officers with a weapon might deter people from committing a crime, not necessarily to use it, but to deter (crime)," Johnson added.

College students are skeptical of how more guns on campus will actually make them safer.

"In my three years on campus I've never felt endangered, so I see no need for an average Joe to be walking around with a handgun on him," Mississippi State senior James Carskadon said. "We have adequate security, so really, it has much more potential for harm than good. A permit won't stop someone who is determined to bring a gun on campus from bringing one, either.

"It's really more a matter of outside perception, and I would rather that perception not be 'it's OK for select citizens to bring guns onto campus,'" Carskadon continued. "I would rather the university''s stance be 'under no circumstances should students, faculty, staff have firearms on campus.'"