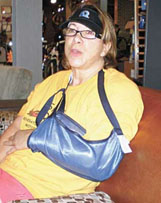 Jan Morgan, who was struck by a car while cycling in Clay County on May 22, has since returned to work at Boardtown Bikes, a shop she and husband David own in Starkville.
Photo by: David Miller

STARKVILLE -- David Morgan struggles to accept the circumstances of his wife''s cycling accident.

The Morgans feel Cedar Bluff woman Robbie Norton, who hit Jan Morgan with her car while Morgan and a friend were cycling in Clay County on May 22, broke the law but hasn''t been punished.

David Morgan has known for more than two months that felony charges wouldn''t be filed by the Mississippi Highway Safety Patrol because Norton wasn''t impaired by drugs or alcohol during the crash. Additionally, Norton didn''t leave the scene of the accident and didn''t intentionally hit Jan.

Misdemeanor charges were still likely, though, since Norton violated the 3-foot law -- a state law that requires motorists to give cyclists 3 feet of space.

The Morgans'' lawyer, Starkville attorney Brace Knox, also confirmed Norton''s insurance had lapsed at the time of the accident, though Norton had produced an insurance card with a future expiration date to state troopers at the scene.

"There are a couple more things that have to be discussed (between troopers investigating the accident)," Mobley said. "I don''t know if there will be charges in the future. That''s all I can say about it at this point."

Norton''s published home phone number isn''t in service, and she could not be reached for comment.

"She''s walked away scot-free," David Morgan said of Norton. "To me, I don''t know what the purpose of law enforcement is. Why can I get a ticket for no insurance, but not her? To me, it''s promoting irresponsibility."

As a result of her injuries, Jan Morgan spent five weeks in a coma and underwent numerous medical procedures at North Mississippi Medical Center in Tupelo and the Shepherd Center in Atlanta before returning home July 28. She''s since returned to work at Boardtown Bikes, the bicycle shop she and David Morgan own in Starkville. And aside from an occasional lapse in balance, she walks without limitations. She''s anxious for doctors to give her the green light to drive a car and ride a bike.

Now that the uncertainty of Jan Morgan''s condition has passed, the Morgans are focused on their legal options. They could pursue misdemeanor charges on their own, which could result in fines and restitution. But if Norton were to be acquitted, she could sue the Morgans for malicious prosecution.

The couple are "50-50" on pursuing misdemeanor charges, Jan Morgan said.

"We have to weigh whether that''s worth it," she said. "(Norton) doesn''t have a lot of assets, but me and David have a lot to lose."

The Morgans plan to file a civil suit against Norton, though a time table to proceed is indefinite as Knox waits for Jan Morgan to recover as best as she can.

"Jan is way off from that," Knox said.

A civil suit, given Norton didn''t have liability coverage at the time of the accident, won''t yield much for the Morgans. Jan Morgan had uninsured motorist coverage on her personal insurance policy, and that''s helped with medical bills, Knox said.

For the Morgans, a civil suit will be a formality.

"The most I can ask for is to get a judgment against her to go on record and garnish her wages wherever she works," Jan Morgan said. "If I get $5 a week, at least she knows she paying back. Other people may see it as dragging it out; to me it''s surreal. I have all these scars and no recollection of how it happened.

"Pursuing a lawsuit won''t make me hurt again. We feel like she needs to have some kind of penalty. We need to make an example."

News of Jan''s accident has been a hot-button issue locally, around the state and in nationwide cycling groups. Through updates on her Facebook page and at her blog, Getwelljan.blogspot.com, fellow cyclists have offered encouragement and written updates on efforts to create laws to protect cyclists in other states.

The Morgans hope the attention will help amend Mississippi''s John Paul Frerer Bicycle Safety Act during the next legislative session in January. The Morgans want felony charges included for anyone who hits and seriously injures a cyclist.

According to the National Highway Traffic Safety Administration, 630 cyclists were killed and more than 51,000 were injured in motor vehicle crashes in 2009. Ten of those fatal crashes occurred in Mississippi.

"What this particular case did was highlight problems we have with the current bill," Chism said. "It''ll be used as an example to tighten for felony prosecution. We hope it will pass."

Meanwhile, David Morgan has become an advocate to change legislation regarding distracted driving. According to the MHP accident report David Morgan posted on Facebook, Norton was on her phone when she exited the vehicle.

Currently, only Mississippi drivers with learner''s permits are prohibited from text messaging while driving in Mississippi. No states ban complete cellphone use, while nine prohibit handheld use.

"The process of making a law is difficult," David Morgan said, "even getting teeth to the 3-foot law. I''ve heard the cellphone bill has been voted down before. It''s just too convenient. Unfortunately, it''s going to take more people dying or becoming severely injured.

"We''re extremely fortunate with what happened to Jan."