FROM THE BOTTOM TO THE TOP: Local inventor, businessman plans movie based on his life 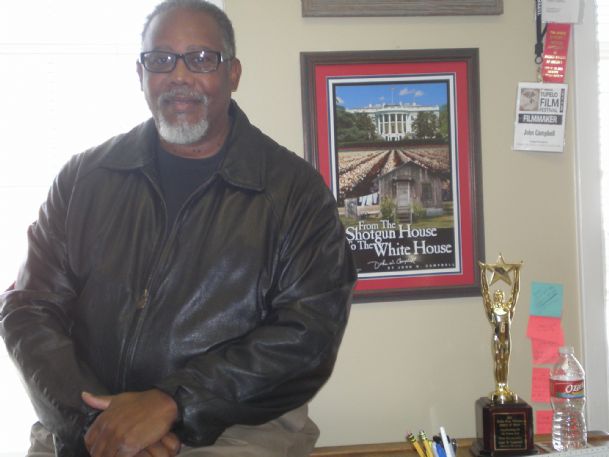 Starkville entrepreneur John Campbell will begin production of âFrom the Shotgun House to the White Houseâ in the summer. Campbell, a native of the delta, says the blend of traditional cinema and documentary is intended to inspire people heading into the 2012 Presidential election. Photo by: David Miller/Dispatch Staff

STARKVILLE -- Starkville inventor and businessman John Campbell's trajectory from poverty to successful entrepreneur wasn't easy, but with imagination, hard work and a little common sense, he made it to the top.

He's an inventor, with Shaver's Choice skin therapy system and Ram-Lock protection systems to his credit. He's a businessman, as founder of Yo' Transportation, a car service for Medicaid and Medicare recipients.

Now, he's looking ahead to his latest endeavor: A movie based upon his life.

Campbell, perched in his second floor office on Main Street, has plenty of time to kick back and smile about how he made it from the cotton fields of Inverness to owning eight patents.

Using his path to success as a narrative, Campbell is two months out from beginning production on his second film, "From the Shotgun House to the White House."

The film will be shot in the Delta and will feature documentary clips from former Secretary of State Colin Powell, singer Will.I.Am, Tavis Smiley and Dr. Cornell West. The film is part documentary, part biography, said Campbell, who'll be portrayed by Wendell Pierce, of TV shows "The Wire" and "Law and Order."

"The film will really shine light on a lot of issues that maybe aren't being brought up right now," said Campbell, noting the lack of aid to small businesses. "You hear a lot about embracing small businesses, but there's very few resources for people with great ideas."

Campbell said the country's job issues are far greater than the plight of struggling small businesses, but Mississippi -- his home state -- has as much potential as any other state to spark private sector growth.

"In Mississippi, there's a lot of vacant land that can be used for crops," he said. "There's a lot of vacant buildings that can be opened in ways that small business people can go into them as an incubator or something of that nature. It's time for America to wake up and realize we can do a lot for ourselves if we give people a vehicle to use their ideas and bring something to the table."

Campbell hopes the film, which should finish production in late summer, will inspire people who have more questions than answers about how to find work, provide jobs and sustain.

It's a narrative with which he's intimately familiar. Forty years ago, he was just starting out, trying to patent inventions and market them. Inventing things wasn't the tough part; getting mainstream attention and finding a vehicle to take his product nationwide was the hurdle.

"This whole thing is to showcase my life story, where I came from, my inventions," Campbell said. "It's amazing you have to toot your own horn, but when there's no one to do it for you, you have to blow it yourself."

"I'm almost 60-years-old. I've been inventing stuff since I was 10," Campbell added. "I struggled to get certain grants and loans. What I'm trying to get is politicians to think about the grassroots level. Help them come up with the means it takes them to get going."

Campbell wrote his script with help from Doc Suggs, who has written for "The Today Show" and Florida-based Sunco Film Corp. Suggs also writes original screenplays and stays busy as a freelance writer.

Suggs said Campbell didn't need much guidance in writing the script, despite the unusual nature of blending a documentary and a traditional film.

"It's not particularly hard," Suggs said. "Robert Altman had a similar idea back a few years ago, putting together his political ideas in what he called a 'mockumentary.' Technically, this is not mocking, like 'Spinal Tap' or other films. This is a more serious approach to the political situation and economy we find ourselves in at the moment. I've been more of the teacher of how to put these ideas in screenplay format."

Campbell said the film will cost $500,000. He's currently fundraising in an attempt to offset some of the costs.