Church hosts a special night for area teens and adults 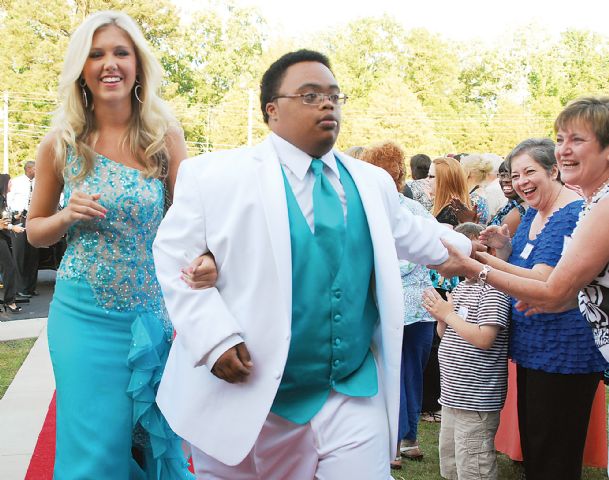 When he arrived at the church in November, he had a feeling his congregation would be receptive to Joy Prom, and he was right. Though new to his church, the concept of a prom for special needs teenagers and adults is not unique to Columbus or to the faith community. But for the 62 guests and their dates -- students from the church and New Hope High School -- the evening was an entirely new experience.

Daffern was inspired by the idea after attending a church conference where he heard several youth pastors talking about holding proms for special needs residents.

In Luke 14, Jesus tells his disciples a parable in which he instructs them not to invite friends, brothers, relatives or neighbors to a banquet because they might return the kindness. Instead, he tells them, invite the poor, the crippled, the lame, the blind -- those who cannot repay. Out of that parable, a prom was born.

Church members have been planning the event since January, and by Saturday night, no detail had been left undone. White balloons framed the entrance to the church hall. Inside, white icicle lights hung from the rails of an upper balcony, and a mock disco light splayed a rainbow of colors around the room.

An iPod pumped out a steady stream of tunes, and when the first strains of the Black Eyed Peas' "I've Got a Feeling" came across the loudspeaker, everyone -- young and young at heart, standing or wheelchair-bound -- flocked to the dance floor.

Each couple had their own style and their own rhythm, but the expressions were the same -- unbridled joy. Though tables were scattered around the room, the night had just begun, and the majority of the chairs were empty.

The event was a testimony to both the power of faith and the generosity of the community. Earlier in the day, volunteers helped with attendees' makeup and hair while others shined shoes and helped with clothes. Numerous businesses donated supplies and food, including Chick-fil-A, which provided more than 1,500 chicken strips for the occasion.

It was an emotional night for many, but especially for Ann Thompson, who is a special education teacher at James W. Hunt Community Home in Columbus.

She first saw the need for a prom 22 years ago when she talked with residents of the group home and realized most had spent their lives deprived of the simplest of pleasures like dressing up and going out into the community.

During therapy sessions, they worked on communication and social skills, but their world was limited. Though those with special needs are integrated more frequently into the mainstream population now, two decades ago, it was uncommon for them to be included in any sort of community event. Even if they attended public school, they were rarely invited, or allowed, to attend the prom.

It bothered her. And so she took it upon herself to recreate a basic high school experience for those who had never been given the opportunities of their peers.

Several of the group home residents attended Saturday night's event, and Thompson couldn't stop crying as she watched them step from the limousine.

"This is big," she said. "This is the real world now, no supports. This is like graduation."

It was almost as big a deal for the parents, who wielded cameras and poked and prodded one another when it was their child's turn to strut down the aisle. Janice and Kenneth Whitfield, of Louisville, grinned as their daughter, 25-year-old Hope Whitfield stood in an elegant black gown and waited to be escorted by her date, New Hope High School Senior Leebo Davis.

"She's been so excited, this is all she's talked about," Janice Whitfield said. "She liked the limousine and loves dressing up and things like that."

Hosting the prom was a blessing for Mt. Vernon parishioners as well, said Roger and Deborah Dawkins as they presided over the buffet and dessert tables.

The couple met in this church. They got married here. And now, they participate in a living worship together, doing what they believe is the Lord's work.

"It's just a great way to serve," Roger Dawkins said. "We wanted to reach out to the community and let them know they're valuable and we love them. We want to be the hands and feet of Christ."

'This generation gets it'

But Daffern and Mt. Vernon Baptist took a big risk in introducing the Joy Prom to Columbus, Thompson said.

Though people embraced it, they could have just as easily rejected the idea or reacted with scorn or ridicule.

The warm reception and enthusiastic response is a sign of greater understanding, acceptance and compassion for those with special needs, Thompson said.

Decades ago, such integration would not have been welcome and may not have even been possible.

"We've come a long way," she said. "It just shows me the love of the community. This generation gets it."

A raucous round of applause erupted from the church members gathered outside. Another limousine had arrived. And though these were the final guests of the night, the last were greeted as the first -- with love.