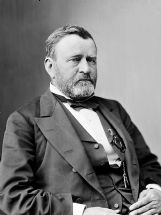 STARKVILLE -- The man whose name was once a byword in Mississippi and throughout the South has found a home of sorts at Mississippi State University.

Grant, the nation's 18th President, played a prominent, if at the time an unpopular, role in Mississippi's history. As a general in the U.S. Army, Grant captured the port city of Vicksburg, successfully splitting the Confederacy in two. He was later given command of all U.S. forces where he led his army to a victory in the bloodiest conflict in the nation's history.

Now, Grant's presidential artifacts will remain permanently at the Mitchell Memorial Library on the MSU campus, where they have resided since 2008.

"The national media loves this stuff," said MSU history professor emeriti John Marszalek. "They wonder how it is possible that Grant's library could be in Mississippi."

Marszalek, a nationally recognized expert on the Civil War, taught history at MSU from 1973-2002. He has served as a mentor of distinguished scholars and professor emeriti since then.

He is also a key figure in MSU's association with the Grant Foundation.

Marszalek succeeded John Y. Simon as director of the Grant Foundation in 2008 and was instrumental in helping MSU secure the Grant papers later that year, when they were moved from Southern Illinois University. Grant was a native Ohioan and his papers were first located at Ohio State University.

The celebration will include two events on Saturday. At 1:15 p.m., a panel discussion will be held at the Starkville Community Theatre on Grierson's Raid. Panelists will include MSU Archivist Michael B. Ballard, Starkville Police Chief David Lindley, Marszalek and noted Civil War historian Bill Parrish. Lindley long has been active in Civil War reenactments.

The final public event takes place at 7:45 p.m. at the downtown Columbus Convention and Visitor's Bureau with a program led by Jean Edward Smith, Marshall University's John Marshall Professor of Political Science. His topic will be "Ike and Grant: Grant's Influence on Eisenhower."

Although it may seem odd that the man who laid siege the Vicksburg would have his Presidential Library located in Mississippi, Marszalek says there is ample evidence that the state and Grant shared some bonds of affection after the war.

"First, if it wasn't for Vicksburg, few people would even remember Grant," Marszalek said. "And he almost certainly wouldn't have become President of the United States."

Beyond that, there is some evidence that one of Grant's biggest post-war fans was Stephen D. Lee, a Confederate general who became the first president of The Agricultural and Mechanical College of Mississippi (now Mississippi State).

"Grant's son was one of the main speakers at the dedication of the monument to Stephen D. Lee," Marszalek said.

Since the arrivals of Grant's letters, which also include photographs and other memorabilia of his time in office (1869-1877), the MSU library has gone through the pains-taking task of cataloging and cross-referencing the more than 15,000 linear feat of material. Grant's letters are contained in 31 volumes with a 32nd volume soon to be released.

"We think it will be a great asset to not only to historians and researchers, but also to anyone who has an interest in history,' Marszalek said. "It used to be that if you wanted to see if say, Fred Smith ever wrote a letter to Grant, you had to search through all the volumes. Now, we can find out that information in a matter of seconds. You can see it on the website or get a photocopy. That information is easily accessible now."

Marszalek said he has discovered something of a whimsical symmetry in Grant's Library being established at Mississippi State.

"One of the great cartoonists of Grant's era (Thomas Nast of Harper's Weekly) portrayed him as a bulldog in his cartoons," Marszalek said. "In addition to that, Lincoln once wrote to Grant during the campaign against Robert E. Lee near the end of the war to engage Lee's army and 'hold on with a bulldog grip.'"