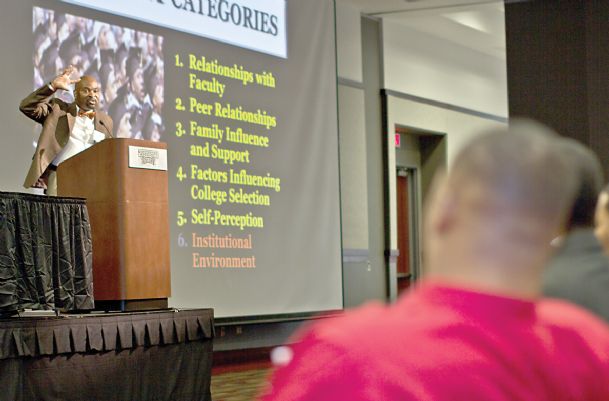 STARKVILLE -- Officials at Mississippi State University have reported that African American male graduation rates are consistently 20 percent lower than the graduation rates of white males, but the statistic is not unique to the university.

The question is: Why?

"Human Capital: Enhancing the Academic Achievement of Men of Color," a conference held in the Colvard Student Union on MSU's campus, addressed the issue Friday.

The event drew several experts to weigh in on the issue, including U.S. Air Force Brigadier General Samuel Nichols and author Fred Bonner, both of whom spoke of their personal experiences with success, failure and the process of dealing and persevering.

Esters said the low graduation rate correlates with the percentages, pointing out that many of these males incarcerated are between the ages of 18 and 24, ages usually associated with college enrollment.

According to Esters, higher education institutions need to have a more solid partnership with the industries they are training their students for, saying that if there was more of a connection, universities wouldn't be as quick to lose students between their sophomore and junior year, a time that has repeatedly shown a high drop-out rate among MSU's black male students .

Oliver Meyers, an assistant professor in MSU's mechanical engineering department agreed with Esters, but said that even with the connection to industry and its leaders, "a bachelor's degree is not enough anymore."

But he did say that he thinks regardless of what level of degree is pursued, an intensive mentoring program could really make difference.

"We need to make take it down to a familial level," Meyers said. "We have to bug these kids, you know, we just have to make sure they are accountable and that they realize, when they face a challenge, that it's never something that is insurmountable."

MSU Provost and Executive Vice President Jerry Gilbert said losing black males after their sophomore year has been one of the most baffling statistics he has faced, especially because the retention rates for black males is identical to white males from freshman to sophomore year.

"What are we not doing after freshman year that we need to be doing to keep them here?" Gilbert asked.

Bonner, author of "Academically Gifted African American Male College Students," studied the success of black males and the phenomenological relationship with historically black colleges. A panel made up of successful men, who for the most part graduated from MSU in some capacity, commented on Bonner's findings and studies.

Bonner's studies show that, in most cases, African American males do better at historically black colleges for several reasons, including the feeling of not being threatened by Caucasian success and the absence of "having to make everyone else feel comfortable," by remaining non-confrontational.