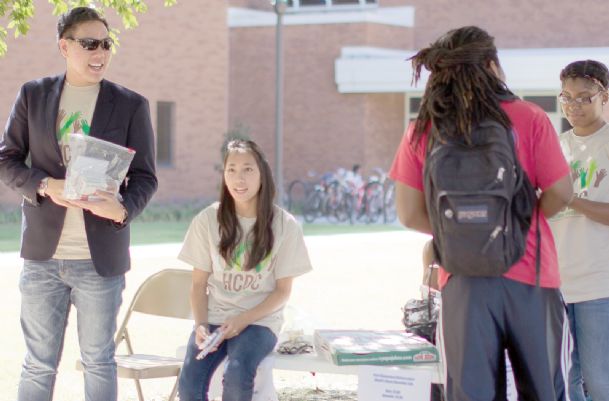 Bryan Hoang and Alex Hoang sit on the Drill Field on the campus of Mississippi State University on Monday afternoon selling candy bars and sharing information about the Holmes Cultural Diversity Center. Both MSU and Ole Miss were ranked among the nation's top schools for free speech. Photo by: Micah Green/Dispatch Staff

As college football enters its third week, the Southeastern Conference continues its stranglehold on the national polls, claiming three of the top seven spots in two separate polls.

But it turns out, the SEC has some other rankings to brag about this week.

FIRE granted the "green light" to each of the seven universities, meaning the schools' policies are in accordance with federal definitions and do not pose any serious threat to free speech on campus.

The schools selected have also avoided any serious censorship for a number of consecutive years.

Even though both Ole Miss and MSU are just now making an appearance on the rankings, officials from both schools say free speech has been a priority for years.

Ole Miss and MSU may have cracked the rankings earlier were it not for some of the wording in some of their policies.

Sparky Reardon, dean of students at Ole Miss, said this was case in Oxford prior to the beginning of the spring semester, when the university found out it had been given the "green light."

"The only thing that was holding us back was the wording in our policy," Reardon said. "That is the case with a lot of people, too. It's just not understanding the words and expressions regarding free speech."

Similar issues were holding MSU back, according to Dean of Students Thomas Bourgeois.

"A lot of time your intent is good, but at the same time it may be implemented or written poorly," he said. "I just think our policy didn't match our practice."

Bourgeois said MSU had issues with the word "offensive" in their previous policy (which they revised over the past year), but changed the policy to defer to Supreme Court rulings on words like "obscene."

"Being offensive isn't going against the First Amendment," he said. "You know, there are pretty high standards that say what obscene is and what harassment is. We just changed that to reflect the federal definition and cleared up the language."

There are times granting someone a time, place and manner can make Bourgeois nervous, he said,

When Evangelical preacher Michael Venyah comes to town, Bourgeois can feel this way. Venyah has been known to yell at students, condemning their lifestyles and making assumptions on transgressions. It's a fire-and-brimstone thing, that can be very offensive and even intimidating to some.

But Bourgeois said he has also never felt better than when he witnesses students engaging Venyah, and now realizes how great of a learning opportunity it presents.

"One of my proudest moments was seeing students peacefully challenge Venyah, someone who is really just spilling hate," he said. "And those students will remember those moments just as much as they will remember the eureka moments they have in the classroom."