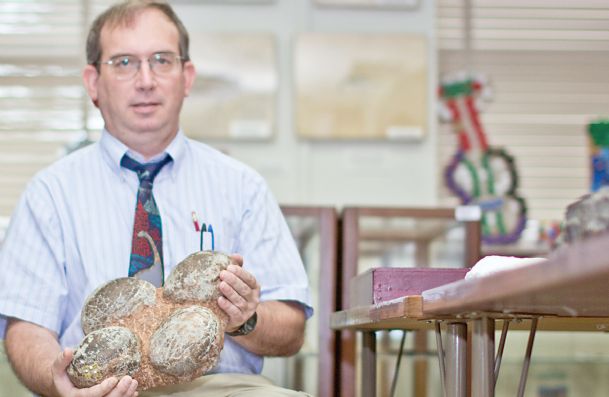 John Paul Jones, a doctoral student at Mississippi State University, shows off his dinosaur eggs, which are close to 70 million years old, according to tests. Jones found the fossilized eggs in Montana about 10 years ago. He is now awaiting results from a CT Scan done by Premier Imaging in Starkville. Photo by: Micah Green/Dispatch Staff

"Gullies are always a great place to look for fossils because weather has already done half the work for you," he said, recalling his leisure trip to the new, old west.

A high school teacher at the time, Jones had just returned from a trip to Africa, where he took part in an archeological dig in the Olduvai Gorge in Eastern Africa, more commonly known as "The Cradle of Mankind."

The trip to Montana was more of a vacation than anything else. If he ran across some fossils, well, that would have just been a plus.

Now, back to the gully.

Jones is with two other men, who own the land the gully occupies.

"We found a toe bone first," Jones said. "And so we knew that obviously something was out there. We looked around a little more and I saw what looked like an egg sticking out of the wall of the gully."

Jones was right. It was an egg.

By the time they had finished, they had found 10 eggs.

That was 10 years ago, and even though he was undoubtedly excited when he found the eggs, Jones might be just as excited today. It might have to do with what he knows now, that he didn't know then: The eggs he found are approximately 65 to 70 million years old.

Though there is little way of knowing for sure right now, Jones has deduced, from the size, shape, surrounding fossils and location, that the eggs hold embryos of a hadrosaur, a duck-billed dinosaur.

Jones ended up keeping a clutch of four eggs, after giving four to the men who owned the land, and trading two to add to his collection, which he boasts is rather robust.

But Jones is also awaiting images from a CT scan that was conducted on his clutch of eggs. So, that might also be a small factor in his excitement, but it's hard to tell.

"I have always, since I was a little kid, loved dinosaurs," he said.

Most kids do, he realizes.

"I never, ever grew out of it, though," Jones said. "But it is still working out pretty good."

In the 17 years that he taught high school chemistry and earth science, Jones used his fossil collection as a teaching tool every chance he got. But after the dig in Africa and finding the eggs in Montana, Jones wasn't satisfied with the occasional chances he had to show off his fossils.

He applied and was accepted to a master's program at MSU, and moved from Fort Walton, Fla., to Starkville to pursue his passion. Jones received his master's in 2007.

Now, Jones is in his last year of a doctoral program and he said thanks to MSU's accommodations, he has been able to not only focus his studies, but to use his eggs as part of his research.

Premier Imaging in Starkville decided to assist Jones. Through a partnership with MSU's Institute for Imaging and Analytical Technologies, Premier has their LightSpeed VCT 64-Slice CT Scanner available as a research tool for the university.

The high-end scanner takes thousands of 2-D X-rays around a single axis of the eggs to generate a 3-D image.

"Premier did the (CT) scans gratis," he said. "They were stoked and really interested in it, too: It seemed like they wanted to see what was inside, too."

Jones had a CT scan done on the eggs once before, but it was years ago back in Florida. He said he went to get a CT during a health check up and brought the eggs along.

"I sweet-talked them into running the eggs through, too," he said.

But the software and updated systems Premier provided to Jones are far superior to the scan he got in Florida, and when he does get the results, Jones will be able to see much more detail on the inside of the eggs and will be able to see that detail from several angles.

When Jones receives the images, he hopes to be able to take the eggs and images around to local classrooms and other universities. The eggs are currently on display from 9 a.m. to 11 a.m. in the Hilbun Hall museum, which holds several of Jones' fossils as well as others.

"To find any fossil is rare," Jones said. "We want to get people excited with fossils, but also with new technologies that are coming out. It really is coming full circle."