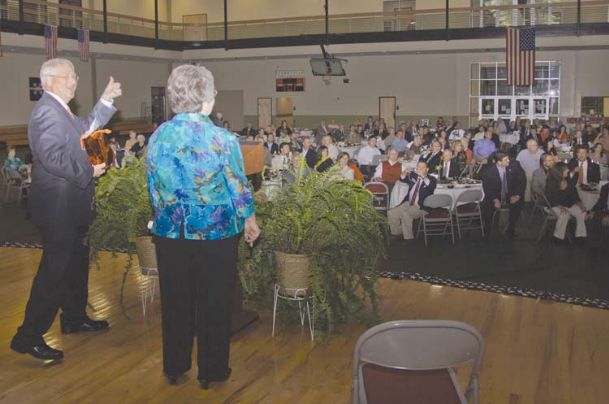 Sen. Roger Wicker accepts a gift from Marnita Henderson at the Oktibbeha County Republicans' annual Patriots Dinner. Held at the Sportsplex in Starkville Monday night, the Patriots Dinner sold out its 300 tickets. Along with Wicker, other local and state dignitaries were on hand, including U.S. Rep. Gregg Harper and U.S. Rep. Alan Nunnelee. Photo by: Micah Green/Dispatch Staff

STARKVILLE -- Sen. Roger Wicker said he was in the peanut butter and jelly aisle of a supermarket the day after Thanksgiving in 2007 when he got the call from Trent Lott who told Wicker he would be stepping down from his seat in the Senate.

"Long story, short, Haley Barbour chose me to take that seat and then to run in 2008," Wicker said.

Wicker won the special election and has since filled the remainder of the term.

Monday night at the Oktibbeha County Republicans' Patriots Dinner, Wicker announced to the 300 in attendance that he was again seeking one of Mississippi's Senate seats.

"I didn't expect to ever utter those words," Wicker joked, noting that he was content with his seat in the U.S. House of Representatives, the position he held at the time of Lott's resignation. "I want you to know, though, that I am so grateful for the people that have supported me."

At the Monday night dinner, which was held in support of Mitt Romney, Paul Ryan and the rest of the Republican candidates, Wicker told the audience something he said he has been unable to tell any other group he has spoken to.

"This is the first time ever in this whole election, that I have been able to get in front of a crowd and honestly say we are now winning this race," he said. "We are going to elect Mitt Romney President of the United States."

As the keynote speaker, Wicker addressed what he and the majority of the Republican Party see as the important issues concerning the upcoming election.

According to Wicker, too much of the media's focus is on the numbers of the election and the race itself rather than on the issues that are affecting the nation.

"You have Romney wanting to speak about the issues, about the future of this country, through the distinctions," Wicker said, "and then (the media) just wants to talk about the polls or who was winning."

Noting his appreciation for presidential debate moderator Jim Lehrer for letting the candidates actually have discourse, Wicker said the first debate between President Obama and Romney proved to Wicker that Romney is undoubtedly the best candidate.

Wicker, along with U.S. Rep. Alan Nunnelee, U.S. Rep. Gregg Harper and several other speakers hammered again and again on the perceived failures of the Obama administration, with "ObamaCare" being one of the biggest targets.

But there was also a spotlight cast on Romney's platform and his success in both business and politics. Though many of the companies Romney has been associated with are multi-million dollar companies, the need to grow small business, which Wicker pointed to as the backbone of the nation, was stressed.