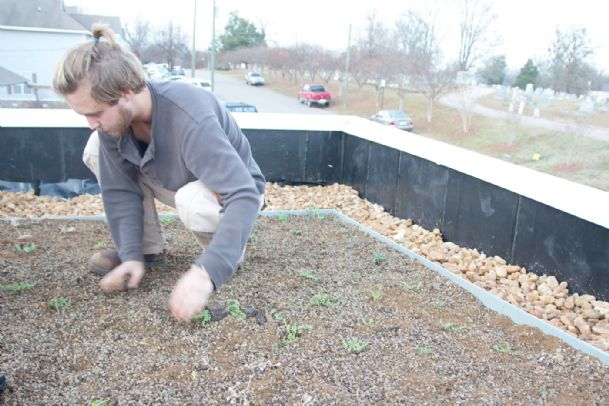 Micah Green/Dispatch Staff Michael Vampran tends to some new plants on the green roof atop a new pavilion next to the Oktibbeha County Heritage Museum. The Mississippi State University Landscape Architecture and Contracting Department has been working on the pavilion since the beginning of the summer, and the green roof is one of the only of its kind in Northeast Mississippi. Photo by: Micah Green/Dispatch Staff

STARKVILLE -- The finishing touches are being put on a new pavilion at the Oktibbeha County Heritage Museum.

On Friday, Corey Gallo, assistant professor in Mississippi State University's Department of Landscape Architecture, and some of his students helped move five tons of soil to the roof of the pavilion, and began planting vegetation in that soil. Once complete, the green roof will be one of the only of its kind in Northeast Mississippi.

Green roofs have become increasingly popular in cities throughout the United States in recent years, but the practice of topping roofs with sod or soil has been used around the world for hundreds of years. The technique helps absorb rainwater, provide insulation and, for more urban communities, provide wildlife habitat.

Because the pavilion is not enclosed, the Oktibbeha County Heritage Museum green roof merely serves as a way to collect rainwater, but Michael Vampran, a senior majoring in Landscape Architecture and Contracting, said the project is more about educating citizens on the benefits of "green" solutions.

"We just wanted to bring some awareness," Vampran said. "Ideally, you put a green roof on to serve a more specific purpose, but we think getting the word out is pretty important."

The project began at the beginning of the summer, with small improvements every couple weeks since, but Gallo, Vampran and others have really picked up the pace lately. They hope to be finished with the roof and most of the landscaping by the end of this semester.

Vampran said he thinks the Department of Landscape Architecture will maintain the landscaping for the museum, even after the project is completed.

"That really just means there is never a set finishing date," Vampran said. "It's going to be an ongoing project."

Students planted several different types of vegetation on Friday, but the highlight of the lineup will be wild sunflowers, which grow to be about five to six feet tall.

The public will be able to see the roof top garden by climbing a spiral set of stairs on the outside of the pavilion, and ideally, Vampran said, there will be an informal path to walk through the garden.

Under the pavilion, which, in general, has been conceptually designed as a "community space," two benches have been installed, and the space could be used for any number of activities.

Again, though, Vampran made it clear that the biggest benefit to installing the roof is simply getting the word out.

"The whole idea is trying to raise ecological awareness," he said. "There are options out there and they can be beautiful. Landscape architecture can be more than just shrubs."