Higgins: Silicor project off the table 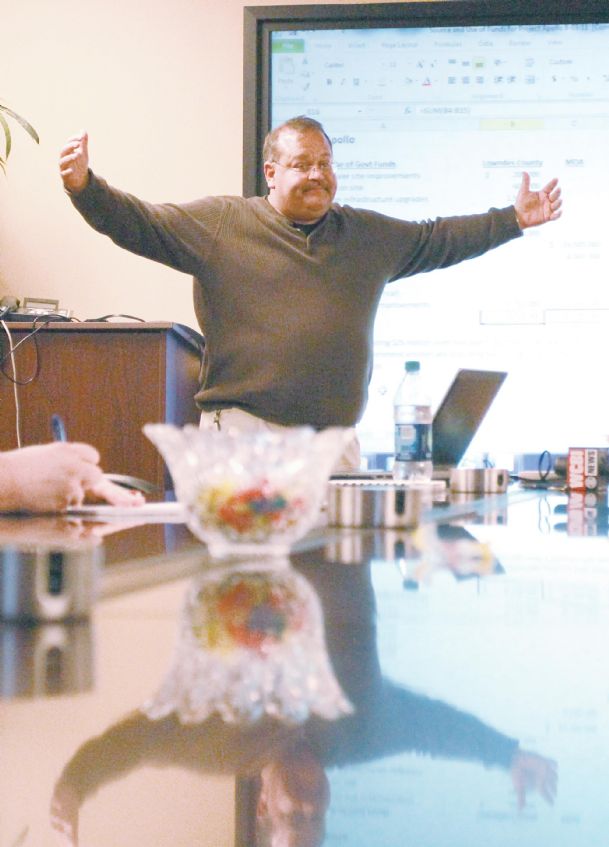 Golden Triangle Development Link CEO Joe Max Higgins explains the series of events that led to the collapse of a $600-million project during a meeting with media at the Link offices in Columbus Wednesday. Photo by: Lee Adams/Dispatch Staff

After more than two years of wheeling and dealing, an economic development deal once known as "Project Apollo" came to a whimpering halt Monday, bringing the promise of 971 new jobs to the area down with it. But officials connected to the project say it started to burn out almost from the start.

Higgins also said he had received a letter from Silicor Materials, the second phase silicon purification plant, stating the company would not be placing a required $50,000 in escrow as it was still finalizing its financing. The escrow deadlines were approved by the Lowndes County Board of Supervisors Dec. 3 at the recommendation of Higgins. Higgins suggested the financial deadlines after Mississippi Silicon missed a start-up deadline of Sept. 2 and company officials said it would not be able to meet a second start-up date of Dec. 31.

Higgins blamed a lack of funding on Mississippi Silicon investors for the dissolution of the project.

"They did not have the funding," Higgins said. "They told us they had the financing together and they didn't. They hadn't even filled out the loan application. We could no longer hold our resources for them without some refundable escrow money."

Mississippi Silicon officials could not be reached for comment Wednesday afternoon.

The history of the failed project goes back as far as 2010, when Higgins said he was approached about the project by Sen. Terry Brown, R-Columbus, as another Lowndes County project was being discussed during a special session of the state Legislature.

"We have been working on this project since the day KiOR was funded during a special session in Jackson," Higgins said. "I was in the lobby of the capitol when Terry Brown approached me and said he had a new project that would be great for Lowndes County."

Higgins said Brown told him venture capitalist John Correnti and Global Principal Partners were connected to the project and it was going to be an almost billion dollar investment creating more than 1,000 jobs.

"When we were approached about this deal, it was a silicon metal production plant, silicon purification plant and a silicon solar panel plant that would create more than 1,300 jobs," he said. "This is during the time Calisolar was working with Ontario, Ohio, trying to bring a plant there. We started following Calisolar in the news and what was going on in Ohio."

When the Ohio deal went south, literally, Higgins said they were assured the funding was there.

"We were told on July 15 that their finances were fully funded," Higgins said. "We didn't want a repeat of the rebar plant and frankly, Severstal -- both of which had Correnti attached them."

For Higgins, the project started to show signs of being in trouble during the summer of 2012. The project was originally under one memorandum of understanding but then it was brought back before the board with a request for a two-phase MOU with two separate fee-in-lieu agreements. This came after project investors had changed site locations in an attempt to add access to rail service. And although the prospect of bringing additional jobs to the area was certainly enticing, Higgins said holding the property and its services for more than two years was the greatest loss to the county.

"Holding this property for that long took us out of the game with electricity and sewer capacity," Higgins said. "The electricity it required was more wattage than the City of Columbus and it needed 500,000 gallons of sewer a day. This commitment kept us from getting some other prospects. Plus, very few companies want to fall in line behind a place that just hired a huge amount of the workforce with the promise of paying $45,000 a year in salaries."

By November, Higgins said he had enough of Mississippi Silicon and its lack of financing.

"We met with some of the investors and told them we were going to need some earnest money to hold the properties and we needed some monthly updates and we needed them to make some milestones. They told us they could no longer commit to updates. They told us they would just pick up the project and go somewhere else. Then, we even took the milestones out of the deal and told them to give us $150,000 to hold the property until June 30 of this year. Lowndes County gave them the best deal we could which is why they picked the site in the first place."

With the project off the table, Higgins said it is time to move forward.

"We lost about $230,000 on the project, but we also lost a lot of opportunities," Higgins said. "But, we're back to marketing the site and we're glad to have the electricity and sewer available again. It made sense on paper -- it was a good deal for us. But we have four proposals coming in this week and we'll continue to work hard to bring more jobs to Lowndes County."