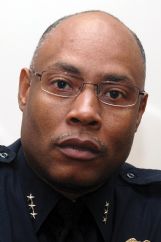 Those wishing to exchange guns for a cash payment can go to one of four designated sites -- the Walmart parking lot, Townsend Community Center, Sim Scott Park and the East Columbus Gym. The first set of buyback dates are Monday, Tuesday and Wednesday from 9 a.m. until 3 p.m.

The buyback was approved unanimously by the Columbus City Council Feb. 5 at the recommendation of Mayor Robert Smith and Ward 5 Councilman Kabir Karriem.

Participants in the program can anonymously bring guns to any of the locations and receive money in exchange for the weapon. Prices will be $20 for BB guns or air pistols, $100 for hand guns, $200 for rifles or shotguns and $300 for military/assault rifles. According to a clause in the city's motion, the guns will be destroyed.

"No one has to worry about selling the guns and putting them back in circulation," Columbus Police Chief Selvain McQueen said.

There is one exception, McQueen noted.

"We will run the guns to see if they are stolen and try to get them back to their owners," he said.

There have been 13 homicides in Columbus between 2008 and 2012, with seven of those taking place in 2011. Three of the homicides remain unsolved. There have also been 160 arrests for aggravated assaults with a firearm in the same five-year period according to statistics from the CPD.

McQueen said he hopes the program will help reduce gun violence in the Friendly City.

"I'm hoping this will bring the community together for a greater cause," McQueen said. "If we get through this program and we have collected one gun, it will have been a success in that the CPD and the city council took a pro-active stance on law enforcement. We have shed some light on a dark situation. This isn't a sting operation. We don't want to scare anyone away. We want to take illegal guns off the street and help get stolen guns back to their rightful owners."

McQueen's wish for a united community comes at a time when guns are one of the more divisive issues in the nation. The Dec. 14 shooting at Sandy Hook Elementary School in Newtown, Conn., left 20 children and six adults dead, not including the shooter, Adam Lanza, and his mother. In response to the shooting, President Barack Obama has implemented a series of executive orders regarding gun regulations. The executive orders include limiting ammunition to 10 rounds, requiring background checks even through sales from private dealers and reinstating the assault weapons ban, which was in effect from 1994 until 2004. The assault weapons ban was signed into law by then-President Bill Clinton. The Obama Administration has called for Congress to implement new laws to address gun violence.

McQueen says his department's program is not politically motivated, however.

"This isn't about gun control -- at all," McQueen said. "I'm certainly not giving up my guns."

While the program was passed by the council during an election season, it was introduced by Karriem in 2011 but no action was taken. It also contains a price tag of $10,000 which the council approved to allocate as purchase money. It will require the manpower of eight officers who will man the buyback stations in pairs for the three days.

McQueen said the officers will be used from different departments and their presence would not affect the day-to-day duties of regularly assigned patrol officers.

Gun buyback programs have become popular across the country though their effectiveness is debatable. In Detroit, gun sellers and collectors set up a space across the street from the police site and offered more money for the weapons. In Newport, Conn., almost 700 guns have been exchanged for cash. The Associated Press reports the city of Santa Fe has released the names of dozens of people who recently surrendered guns to police despite promises of anonymity. The city released this week to a city finance committee a list of people who got IOUs when they surrendered their guns at police headquarters after the city's gun buyers ran out of prepaid Visa gift cards.

The effectiveness of the program in combating gun crimes is also highly contested.

"I doubt the efficacy of gun buyback programs," said District Attorney Forrest Allgood. "They did that in Detroit and it's still one of the most dangerous places on the planet to live."

"I personally think it will increase crime and gun thefts," Chism said. "If thieves need some cash, they now know they can steal someone's gun and exchange it for money."

Chism is also critical of the city destroying the collected guns. In House Bill 1087, authored by Chism, municipalities would be prohibited from destroying guns as the result of a buyback program. The bill died in committee.

"The bill I had would prohibit cities from destroying the guns," Chism said. "There could be some rare guns that could be sold to collectors or dealers. The cities could also use the money collected from selling the guns to collectors to fund the program."