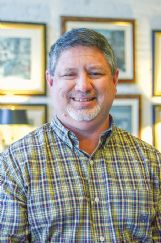 Chris Hemphill has been hired as the attorney for the Columbus-Lowndes Convention and Visitors Bureau.
Photo by: Luisa Porter/Dispatch Staff

Chris Hemphill has been hired as the board attorney by the Columbus-Lowndes Convention and Visitors Bureau Board of Trustees a month after the board voted to advertise for the position.

During its monthly meeting Monday, the board voted unanimously to hire Hemphill.

In January, CVB Executive Director Nancy Carpenter suggested Hemphill be hired for the position. Carpenter's suggestion was shot down by the board, which opted to advertise for a new attorney. Hemphill was the only applicant, however, and the board moved quickly to hire him Monday.

On a motion made by Harvey Myrick, Hemphill will be at all board meetings for a flat fee of $300. He will bill the board an hourly rate of $200 for additional services that are required when the board is not in session.

With meetings that are often two or three hours long, Carpenter said she hopes having an attorney present will help the board members to be conscious of meeting time.

"Chris said he would do the board meetings for a flat fee of $300 on a trial basis," Carpenter said.

Board chairman Dewitt Hicks said all professional services are on an at-will basis and can be terminated at any time with board approval.

Hemphill replaces former board attorney Chris Latimer, who is also the attorney for the City of Starkville. Latimer resigned in December after accusing board members of using him in a political fight between the board and Carpenter.

Hemphill's first board meeting will be March 18.

The board also voted to issue a grant of $8,000 to the Grilling on the River barbecue event. In January, the board voted not to award a grant to the event because of the association between the festival and Myrick, who was originally one of the festival's organizers. Myrick said he has since stepped down from the position and only serves in a volunteer capacity.

Chuck Baker appeared before the board on behalf of Grilling on the River and said everything was in order with the event.

"I think we have met all of the guidelines required by the IRS and the Secretary of State," Baker said. "We request the board reconsider funding for Grilling on the River."

Board treasurer Bart Wise said he still could not vote to fund the event because of Myrick's involvement with the event.

"I continue to have reservations about Harvey being a board member and a volunteer," Wise said. "It's a great event. I just have a problem with this."

A motion was made by Whirllie Byrd to fund the event.

"I am satisfied this is not a conflict of interest," Byrd said.

Wise voted against the motion.

"I think it's a great event and if Harvey is just a volunteer, I think we should fund this," Rissa Lawrence said.

Prior to the board meeting, three members of the grants committee met to discuss the feedback from the public hearing held Feb.12. Myrick, Bernard Buckhalter and Nadia Dale met to talk about possible recommendations from the meeting. Committee chairman Mark Castleberry and Lawrence were not present.

The grants committee will meet March 11 to discuss raising the funding for quality of life events from $8,000 to $12,000 and to remove the 25-percent entertainment cap presently placed on tourism events.