No place like home: Descendant of original owner of the Amzi Love Home draws strength from his family's history 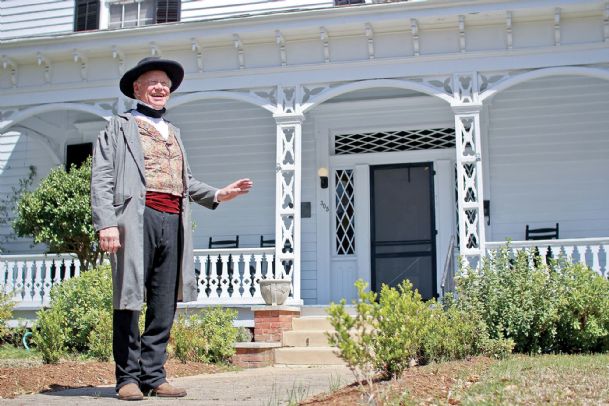 Sid Caradine shows a visitor a thimble owned by one of his family members in the 1870s. The home, which has been in Caradine's family since it was built, is one of the homes featured in this year's Columbus Pilgrimage, which begins today.
Photo by: Micah Green/Dispatch Staff

What does it take to coerce Sid Caradine to tell you about his Columbus roots?

This week, the Columbus Cultural Heritage Foundation celebrates its 73rd Pilgrimage with its tours of homes, churches and Friendship Cemetery. Sid Caradine, or "Captain Sid" as he is more commonly known, will be in his glory.

Dressed in vintage clothing, Caradine, 65, will once again weave his family tales as visitors tour his home, The Amzi Love Home.

"I love absolutely love telling the stories of this home and my family,'' says Caradine, who has been giving tours of the home located at 305 S. Seventh St., since he arrived to take over the family home on Jan. 1, 1981.

"When the home came into my mother's possession, I was living in Colorado,'' Caradine says. "But I had visited the home many, many times and I had always loved the place. So when mother suggested I take it over, I thought to myself, "Yeah, I can see myself living the life of a Southern gentleman."

Although all of the homes and churches on this year's Pilgrimage have their own unique features, the Amzi Love Home, modest by comparison to some of the other homes on the tour, stands apart for one very important reason.

Caradine is the direct descendant of the original owner. Of all the Pilgrimage homes, it is the only home that has stayed in the original family. As a result, many of the home's furnishings can be traced directly to the original home owners, Amzi Love (his name was actually Amaziah) and his wife, Edith. In fact, some artifacts, like a piece of china dinnerware carefully preserved in a glass frame and hung on the dining room wall, go even farther back than that.

"That's a piece of china the family brought over from Scotland,'' Caradine says. "Our family was originally from the Isle of Skye on the west coast of Scotland.''

The Pilgrimage began in 1939, according to Columbus historian Rufus Ward, but the Amzi Love Home and Gardens did not join the tour until 1951.

"It was about the same time that they started the Pilgrimage Ball,'' Caradine says. "They were adding different elements and one of the things they wanted was to add some of the smaller homes to the tour. The Amzi Love Home has been on the tour ever since.''

The seven-bedroom, two-story home is small only by antebellum standards, of course.

Today, Caradine and his wife, Brenda, also run an adjoining property, The Lincoln Home, which Brenda operates as a Bed & Breakfast.

Visitors to the home are immersed Â­ Â­-- some would even say submersed -- in the stories of Caradine's family, which he delivers in resonate Southern drawl, his eyes sparking, his hands animated. There are stories of personal accounts of the great eras of the South, from the early days of the settlement of Columbus to the Civil War, Reconstruction, the Gilded Age and World War I. Every story, delivered at a rapid fire pace, sends Caradine scurrying through scrap books, photo albums, old letters and telegrams. Every wall in the home, it seems, is adorned with a portrait or artifact that tells a portion of his family's story.

The family's story in Columbus began around 1830, when David Love brought his young family to Columbus from South Carolina. The middle of his three sons, Amzi, built what would become known as the Amzi Love Home in 1848 as a gift for his fiancee, Miss. Edith Wallace of Alabama.

"Amzi's family lived right down the street," Caradine says. "As the house was being built, when he and Edith would pass by the house, she would ask who was building the home. Amzi always said, "Oh, that's my sister's home."

It was not until they were married that Amzi Love revealed his secret.

A story born in tragedy

The Loves settled in to life at the home, raising five daughters and a son.

But in early 1874, tragedy struck the family Edith contracted Yellow Fever and died. Amzi Love fell into a state of mourning so severe that his children urged him to go to Memphis to take care of some business -- he was an attorney and Memphis had suffered a Yellow Fever epidemic of its own, creating an unusually great demand for lawyers who could handle probate work.

"So Amzi left for Memphis, but not the route you would imagine," Caradine says. "He took a riverboat to Mobile, did some work there for a few days, then went on to New Orleans and up the Mississippi River to Memphis.''

Not long after arriving in Memphis, Amzi Love contracted Yellow Fever. His early letters home minimized the severity of his condition. But soon, it became apparent to the children that his condition was far more serious than he had confessed.

Two of the daughters, Clara and Mattie, went to Memphis to attend to their father, who died in their arms in Memphis on June 2, 1874.

Caradine is not certain what sort of estate Amzi Love left to his six orphaned children. Whatever it was, it wasn't enough to satisfy the authorities, who took a dim view of minors owning property. To convince officials that they could maintain the home, the children had to post a $5,000 bond.

"Of all the stories, this is my favorite,'' Caradine says. "It's the story of these young girls, ages 4 to 19, fighting to keep their home during Reconstruction."

To come up with the bond money, the girls went to work.

"They sewed," Caradine said, pointing to a cabinet that contains the thimbles the daughters used.

"See this one?" he says, holding a tiny thimble in the palm of his hand. "That would have been the Annie's, who was the youngest. I bet she sat right there and sewed," he says, pointing to a little rocking chair in the corner of the family room.

The children managed to keep the house. And it's been in the family ever since.

For Caradine, the home is more than a home. It's more than history. It is, he believes a big part of his identity.

"I can't imagine what my life would have been like if I hadn't come back to live here," Caradine says. "After being here for 30 years now, I can tell you it's a blessing. When people get to know their families and feel their families presence with them through all of the things that surround you, it gives you strength. It develops your character in a way.

"Today, there are so many people that don't even know their mom or dad. It's sad. I sometimes wonder how they know who they are."