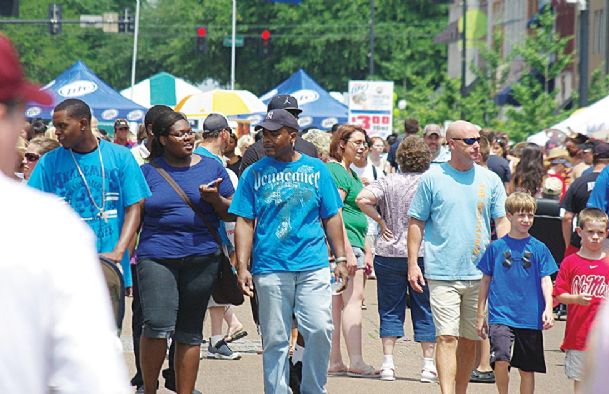 Streets in yellow will close at 6 a.m. and streets in red will close at 3 p.m. Friday, May 3, for the Market Street Festival. Parking will be available behind J. Broussards, The Back Door Restaurant, the lot behind the U.S. Post Office parking lot and behind the Tennessee Williams Welcome Center. View a larger street closing map and detour map online at cdispatch.com. Festival information can be found online at marketstreetfestival.com.

Downtown Columbus will be a mecca for arts and entertainment Friday evening and all day Saturday during the 18th Market Street Festival.

In order to accommodate the vendors and participants, some roads will be closed beginning Friday at 6 a.m. while other streets and parking lots will be blocked off at 3 p.m. for the kickoff of Market Street After Dark, which begins at 7 p.m.

Traffic from Third to Sixth Street will be closed off beginning at 6 a.m., while traffic from Fifth Street will be able to cross Main Street until 3 p.m. At that time, parking lots behind the Tennessee Williams Welcome Center, J. Broussards, the U.S. Post Office and The Front Door/ Back Door Restaurant will also close.

Rock and roll quartet Juke Joint Gypsies and Georgia-based funk rock quintet Mother's Finest will start the weekend off on the right note when they perform at Market Street After Dark on the main stage in front of The Commercial Dispatch. Admission is $10 and can be purchased in advance or at the gate.

Musical entertainment for Saturday will include Sipsey Fire, Memphis-based country rock group Dirt Brothers, Big Joe Shelton and the Black Prairie Blues Ambassadors and pianist Linda Gail Lewis as well as a host of other acts.

Runners can sign up to compete in the Market Street 5K Run, which starts at 8 a.m. Saturday.

There will be a wide array of entertainment for children at the Children's Stage including exhibitions from JKS Studios, Miller's Martial Arts, Full Out Cheer and Tumble and Susan's Dance Studio among others. Kids can also participate in an ice cream eating contest and a hula-hoop contest. Other entertainment available for kids includes a children's swing, a dunking booth, an inflatables station, water balloons, a video game trailer and train rides. Also on hand will be Columbus' own Mother Goose.

Automobile fans can enjoy an exhibit complete with antique and custom cars, drag racers and motorcycles.

Making a return after a successful first run will be the Painted Privies Contest, which features decorated portable toilets. Artists receiving the most votes for "People's Favorite Privy Artist" will win $500.

Cash prizes will also be awarded in the Juried Arts Exhibit, which will feature more than a dozen local and regional artists' work inside the Rosenzweig Arts Center from 9 a.m. to 4 p.m.

An expansive food court gives patrons endless options for their taste buds. Food items ranging from gyros and barbecue to fried alligator, Polish sausage, chicken on a stick, nachos and gumbo will be on tap, and dessert fans will have plenty of choices, including tropical shaved ice, funnel cakes, snow cones and cheesecake.

For more information on street closings and activities, visit marketstreetfestival.com.