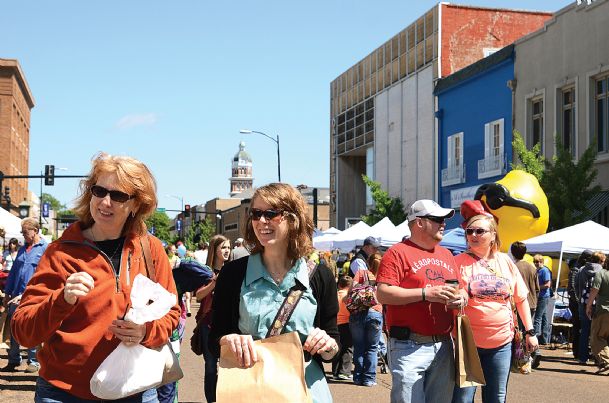 Day Smith, of Starkville, left, and her daughter, Emily Wolff, of Minnesota, walk down Main Street with the crowd during the Market Street Festival Saturday looking at craft vendors. They were on the hunt for something different and fresh to buy. Photo by: Luisa Porter/Dispatch Staff

Luisa Porter/Dispatch Staff Hailey Snell, 2, rides with her sunglasses in her stroller Saturday during the downtown Market Street Festival with her mother, Christina Snell of Columbus. Looking at art work behind them is Teresa Proffitt and Brittany Long of Columbus.

With cooler morning temperatures that led into a sunny afternoon, thousands turned out for Saturday's 17th annual Market Street Festival in downtown Columbus.

As they have done every year for the past five years, Sayonara and Juvante Burks of Columbus brought their three children to the weekend event.

While deliberating between a cheeseburger or a gyro, the Burks took a minute to admire the many street vendors.

"There are more vendors and it looks very organized," Sayonara Burks said."Everything is flowing differently and it is not as congested. This year is the best I've seen it."

"It's a great family atmosphere," her husband added.

Keith Gardner was also standing in line for food and said the atmosphere reminded him of home. A native of Long Island, New York, Gardner has spent the past few years teaching English in China. The first-time festival-goer said Market Street reminded him of Cow Harbor Day back home.

"It's just like my hometown. You've got street food, parades and marathons," he said. "It's nice."

Jyl Barefield was selling lemonade at the intersection of Main Street and Fifth Street and said as the temperatures rose, the crowd increased.

"With the sunshine, it's going to pick up," she said. "We were selling a little before, but now we've got a line."

On Fifth Street South in front of a booth of metal signs, Josh Huckabee of Anchorage, Alaska, said he was in town visiting friends for the weekend.

"We stopped at the sign shop to decorate the man cave," he said, laughing. "We didn't know about it until yesterday but it's pretty impressive. We definitely came the right weekend."

Huckabee's friend, Cody Ables, said it was also his first time to attend the festival and he was looking forward to trying some of the local street food.

"The funnel cakes will be awesome," he said. "There are also a lot of cool crafts."

Casey and Christiana Williams were ambling down Fifth Street walking hand in hand. The newlyweds said they have been coming to the festival for "as long as we can remember."

Theresa Bell and her family were spending most of their time in the kid's activities on College Street but were also planning to buy a variety of crafts.

"The crafts," she said. "We love the crafts, especially the homemade stuff."

Friends Madison Pitts and Tanner Williams were wearing T-shirts promoting the Habitat for Humanity rubber duck race. The Columbus teens said they were looking forward to getting into the plastic ball that floats on water as a person rides inside.

With obvious excitement, Pitts motioned to the large crowd in the parking lot of the First United Methodist Church. "We're going to that big ball thing down there!"

Williams said she was enjoying walking around and seeing all of the different vendors but spending time with her friend made it even more fun..

"It's more fun coming with your friends than coming by yourself," she said.

Dorothy Spann of Macon was standing on the corner of Fifth Street South and College Street and said while she was a little overwhelmed with the variety of things to choose from, it reminded her of a similar festival in Macon.

"This is my first year and I don't know anything about it but it looks just like our Dancing Rabbit Festival," she said. "It's a lot of fun for the kids and for me, too. There's a lot to do, just walk and look."

First-year Columbus Main Street Director Barbara Bigelow said she was pleased with the festival and the amount of both vendors and attendees.

"What a fabulous Market Street Festival," she said, beaming with pride. "We've had great weather, plentiful vendors, great food, a fabulous crowd and good music. We could not have had a better day."