Caledonia teacher arrested for enticement of a child 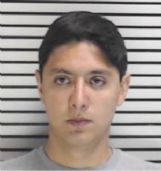 A Caledonia High School teacher has been arrested and charged with enticement of a child.

Marco Sebastian Suarez, 30, of 1099 Merry Valley Dr., in Columbus was arrested Thursday after one of his students claimed the teacher had sexually assaulted her. The girl claimed Suarez sent her sexually suggestive Facebook messages on May 23, two days after classes had ended at the school. She told investigators she went to Suarez's house where a sexual assault occurred. Suarez, who is also the boys' soccer coach at Caledonia High, was arrested on Thursday and received a $100,000 bond. He is currently in the custody of the Lowndes County Adult Detention Center.