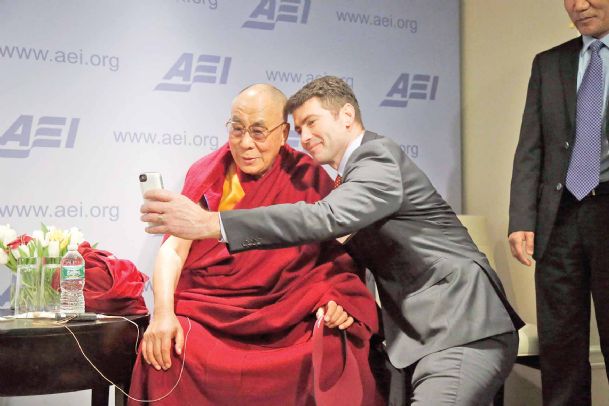 Tibetan spiritual leader the Dalai Lama poses for a âselfieâ with blogger and activist Alek Boyd during a break between panel discussions at an event entitled: âHappiness, Free Enterprise, and Human Flourishingâ on Thursday at the American Enterprise Institute in Washington. Photo by: AP Photo/Charles Dharapak

WASHINGTON -- President Barack Obama granted an audience to Tibet's Dalai Lama on Friday over the strong objections from China that the U.S. was meddling it its affairs. The White House took pains to ensure the meeting was not portrayed as a conference of two heads of state.

Obama played host to his fellow Nobel laureate in the White House's Map Room rather than the Oval Office, where the president traditionally brings dignitaries for photos. Beijing decries the Dalai Lama as an anti-Chinese separatist because of his quest for greater Tibetan autonomy. The White House calls him a respected cultural and religious figure who is committed to peace.

Despite media requests, the meeting was closed to journalists, and in a departure from previous visits the Buddhist monk left the White House without speaking to reporters.

Beijing had protested the meeting after the White House announced it Thursday night. A statement from China's Foreign Ministry issued Friday night reiterated its view that no country has a right to interfere in its internal affairs and said the U.S. had "gravely violated basic norms governing the international relations and seriously harmed the Sino-U.S. relations."

In another sign of its displeasure, China summoned Daniel Kritenbrink, the charge d'affaires for the U.S. Embassy in Beijing, the State Department said. The U.S. had no immediate comment on the development.

Beijing frequently protests meetings with the Dalai Lama, and the dust-ups have become something of a diplomatic ritual for Obama, who faced Beijing's ire when he met with the Tibetan leader in 2010 and again in 2011. In his first year in office, Obama put off a meeting with the monk in what was seen as a move to placate China.

How much does it matter?

"I have severe doubts that the Chinese would proceed to do anything in response or retaliation that would undermine much larger Chinese interests" with the U.S., said Jonathan Pollack, a China scholar at the private Brookings Institution.

In a carefully worded statement after the meeting, the White House said Obama offered his "strong support for the preservation of Tibet's unique religious, cultural and linguistic traditions" and for human rights protections for Tibetans in China. The statement said Obama "reiterated the U.S. position that Tibet is part of the People's Republic of China and that the United States does not support Tibet independence."

The Dalai Lama told Obama he's not seeking Tibetan independence, and both leaders said they hoped talks would resume between Beijing and the Dalai Lama's representatives.

The Dalai Lama gave up his political role as the leader of the Tibetan government-in-exile in 2011. The White House said Obama supports the Dalai Lama's approach of "neither assimilation nor independence for Tibetans." But Chinese officials denounce him as a separatist responsible for instigating self-immolations inside China.

Although the meeting was unlikely to have a major long-term impact on U.S.-China relations, it could contribute to a "souring mood" between the world's two largest economies, said Bonnie Glaser, a China expert at the Center for Strategic and International Studies.

Relations between the U.S. and China are already on edge over Beijing's steps to assert itself in the region. China has bristled at recent U.S. comments critical of its actions in territorial disputes with its smaller neighbors.

White House spokesman Jay Carney wouldn't say whether the U.S. was downplaying the meeting to avoid upsetting the Chinese, nor whether the U.S. gave China advance notice before announcing the visit.

"We are committed to a constructive relationship with China," he said.

A frequent visitor to the U.S., the Dalai Lama has lived in exile in northern India since fleeing China in 1959. His meeting with Obama came near the start of a three-week speaking tour focused more on spiritual fulfillment, business ethics and violence than on Tibetan issues.

3. Some area churches prepare to reopen, others not as eager AREA