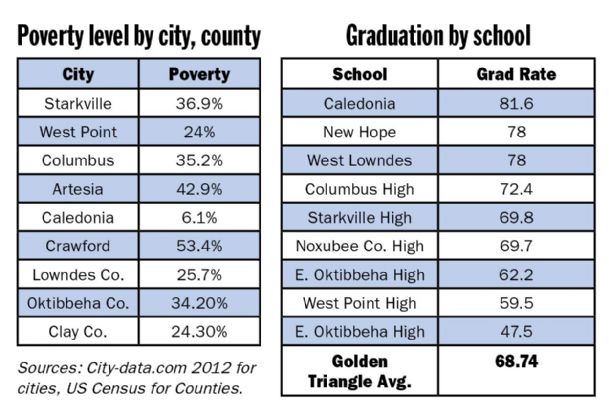 Earlier this summer, the U.S. Census Bureau released a study documenting what parts of the country are considered "poverty areas" -- regions with a 20 percent poverty rate or higher.

In Lowndes County, 25.7 percent of people live at or below the poverty rate. In Oktibbeha County, that rate is 34.2 percent. In Clay County, it's 24.3 percent.

Poverty is cyclical. It doesn't just affect the poor.

Everything from property values, to the quality of public schools, to every resident's ability to make a better life for themselves, is affected by the amount of poverty in a specific region. In other words, if you are not living in poverty, but your neighbor is, it affects you.

"We've all got skin in the game," said Lowndes County District 1 supervisor Jeff Smith, whose district is one of the poorest in the Golden Triangle. "When everyone has skin in the game, it matters to everyone."

Our poverty rate: Why?

Pete Walley, the director of the economic development planning bureau for Mississippi Public Universities, said there are two kinds of poverty.

One is true economic poverty -- a lack of resources. The other is what Walley calls a "poverty of spirit" -- a lack of hope. The former can lead to the latter, and vice-versa.

"If people would be as simple as to finish high school, get a job and wait to have a child until they marry, it would make all the difference," Walley said.

Unfortunately, statistics show that people do not.

Last year, 54 percent of children born in Mississippi were born to single mothers, according to statistics from the economic development planning bureau for Mississippi Public Universities.

In Columbus, 79 percent of impoverished families are single parent families, according to City-Data.com.

The average graduation rate at public schools in the Golden Triangle area in 2011 was 68.74 percent, according to the Mississippi Department of Education.

"You cannot build an economy or society under these circumstances," Walley said.

All of these factors contribute to a lack of mobility among socio-economic classes in our region. People in the Golden Triangle who deal with poverty on a personal level have a hard time fighting their way out.

"Unfortunately, if you buy a house next to an area that's poverty stricken, that will reduce the value," Strauss explained.

Military Road, for example, is a particularly affected area. Homes east of Military Road have much lower values than homes west of the road.

Strauss added, though, that with interest rates hovering around 4 percent, some homes that ordinarily would not be affordable, become more affordable simply because of their location within the city.

"You can also buy a good home at a lower price," Strauss said.

When it comes to children, poverty levels in the Golden Triangle take a darker turn.

Throughout Mississippi, 33.9 percent of minors live in poverty. The 2014 Kids Count Mississippi Factbook reports the rate of children living in poverty in Lowndes County is 37.7 percent. In Oktibbeha County, that number is 38.5 percent, while in Clay County, it's 39.6 percent. In Columbus, city data reports that 45.7 percent of children live at or below the poverty level.

Walley believes being in poverty areas is damaging for all children, whether they personally live in poverty or not. Children, he said, can become normalized to poverty, and that might lead them to be content with less. Statistics back him up.

A recent study by the education non-profit group Kids Count suggests that a child living in a "poverty area" -- such as the Golden Triangle -- has a 52 percent chance to earn less money than his or her parents do now, regardless of their family income level.

According to a study published this year by The Equality of Opportunity Project -- a collection of professors from Harvard and University of California at Berkley -- the Golden Triangle has some of the lowest mobility rates in the country. The study shows that the chances a Columbus resident born in the bottom 20 percent of the economic class rising to the top 20 percent is 3.6 percent. In Starkville, the rate is 4 percent.

Walley knows this state's problems are not new. In 2000, he began to track stories from the national media about Mississippi. In 14 years, not much has changed.

"If I look at the articles from 2000 to now, I could rip out the details and the main information would stay the same," Walley said.

Walley said that median income nationwide has fallen in the last 20 years. He said this is do to a re-balancing of jobs in the globalized market, and that to improve economic situations, people need to boost their skill sets.

"My personal feeling is, it's going to get worse," Walley said.

Coming Monday: The human face of poverty and how some people are seeking to escape.