School board bewildered by supe's relation to new hire 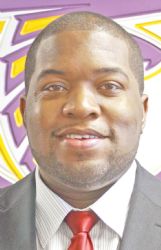 A new hire within the Columbus Municipal School District left some school board members in the dark and wondering why they were unaware that the hire is related to the newly appointed superintendent.

On Superintendent Philip Hickman's recommendation, the board unanimously voted Monday to hire Leslie Smith as the district's director of schools, a position new to CMSD. Smith, a Chicago-based educator, will earn $70,000 a year, according to the agenda given to board members.

Smith is the uncle of Hickman's wife, something three school board members were unaware of when they voted to hire him.

During the meeting, board member Glenn Lautzenhiser asked Hickman about the position's responsibilities and Smith's professional background. Hickman explained that a director of schools would work with the district's nine principals.

The board voted 4-0 to hire Smith, as well as approving 26 other positions. Board member Jason Spears was absent from the meeting.

On Monday afternoon, Hickman confirmed to The Dispatch that Smith was his wife's uncle. After the board adjourned, The Dispatch asked board members Angela Verdell, Greg Lewis, Currie Fisher, Spears and Lautzenhiser if they were aware of Smith and Hickman's relationship.

Verdell was the only one aware of the family connection.

However, Verdell said she and Dunn were both aware of the situation.

Verdell said she learned of the situation "a few hours" before the board meeting and did not see a problem with the hire.

"I knew that Mr. Dunn was working with Dr. Hickman on the personnel agenda and so any legal issues would be handled by Mr. Dunn," Verdell, the board president, said. "I do know what the state law says about that.

"There are only four things that preclude hiring: spouse, child, and anybody that is blood-related to somebody in the district. The state makes provisions for that."

After the meeting, Hickman explained that he did not tell the entire board about he and Smith's relationship because he views it as a personnel issue.

Dunn told The Dispatch that in his opinion, the board had done nothing illegal in hiring Smith.

When asked if he thought it was appropriate to hire a family member, Hickman said, "I knew him before I knew her and what I'm all about is having someone that's competent that really can make a change for our kids."

Hickman declined to provide The Dispatch with a copy of Smith's resume, again citing personnel issues.

Late last week, Hickman's wife, Adilah Zalzala, was also listed on the consent agenda to be potentially hired as the district's special education coordinator. Her salary was listed as $42,000, according to the consent agenda.

However, Zalzala's name was removed from the list of possible hires prior to Monday night's meeting. After an executive session, Dunn said because she is Hickman's wife, the board would need to appoint a temporary personnel director who could recommend Zalzala for hire.

The board voted to appoint Deputy Superintendent Craig Shannon as the personnel director.

The recommendation regarding Zalzala's potential hire is expected to be made at the next board meeting on Sept. 8.