Columbus triathlon comes off without hitch 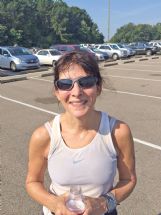 Corey Persons, of Columbus, puts on his goggles before swimming during the first part of the third annual Possum Town Triathlon on Saturday at the John C. Stennis Lock and Dam in Columbus.
Photo by: Luisa Porter/Dispatch Staff

Jeremy Robben, of Florida, helps fix a bicycle tireâs air pressure before the third annual Possum Town Triathlon on Saturday at the John C. Stennis Lock and Dam in Columbus. Robben traveled to his home town to help with the triathlon.
Photo by: Luisa Porter/Dispatch Staff

It was 7 a.m. Saturday. Jamie Nettles stood at the end of the line waiting her turn to plunge into Lake Columbus.

Fog hung over the lake and a crisp breeze blew over the 177 athletes about to participate in the third annual Possum Town Triathlon.

Nettles had arrived back in Columbus, where she lives, at 2 a.m. -- her flight from Portland, Oregon, had been delayed. It was her first triathlon and the 53-year-old would be riding a borrowed bike. First came the water.

The number 168 had been written on Nettles' bicep by a Sharpie. The athletes entered the water in five second increments. Nettles inched toward the starting block, anxious to let the water shock off her jet-lag.

"It's kind of demoralizing being at the end," she said.

Nettles is a daily runner who has completed half-marathons, but her decision to do this triathlon was total impulse, and she hadn't been training in the pool very long. When she got into the water, Nettles fell in over her head.

"I didn't quit, and I really wanted to quit," Nettles, who finished closer to her goal than she had anticipated, said with a smile. "I guess that's what you do these kind of races for."

Runners in this years' triathlon ranged in age from 17 to 78 and in body type from six-pack to beer-belly.

Brad Atkins, who organizes the triathlon with his wife Melissa and regularly competes in events, said the event has grown at a constant rate since its start in 2012. There were around 120 participants the first year and about 150 last year, according to Atkins.

This year brought more competition, but the same victor emerged in the men's division.

John Mooney, 21, of Brookhaven, defended his title and improved his time from last year's race. He finished the 600-yard swim, 17-mile bike ride and 3.3-mile run with a time of 1 hour, 9 minutes and 59 seconds.

"We have seen growth every year," Atkins said. "Hopefully we can grow it bigger and bigger."

The Possum Town Triathlon is sponsored by many local businesses, with The Columbus-Lowndes Convention and Visitors Bureau and Memorial Baptist Hospital among the largest donors.

Athletes were rewarded with free sandwiches provided by Sweet Peppers Deli after they finished.

Around 50 volunteers helped set up, organize and execute the event, the most-encouraging of whom was Marsha Cosby. Shaking two purple cow bells, Crosby cheered on every athlete as they transitioned from water to bike to foot.

"I love the spirit of the racers," Crosby, an avid runner, said.

Nettles intended to spend the remainder of Saturday laying in her back yard resting. After the 24 hours she's had, it seems well-deserved.