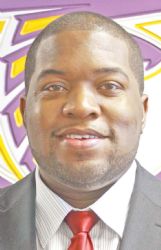 The Columbus Municipal School District superintendent told a room full of local business leaders Tuesday that despite recommending the school board hire his wife's uncle to work for the district, he never intended to go through with the move.

In August, Superintendent Philip Hickman asked the school board to hire Leslie Smith, a Chicago-based educator, to be the district's director of schools. The position, created by Hickman, would have paid $70,000.

The board voted to hire Smith, who is Hickman's wife's uncle. After three out of the four board members who voted to hire Smith voiced concerns that they were unaware of the relationship before the vote, Smith turned down the job.

During a question and answer session that followed Hickman's presentation to the Columbus Rotary Club at Lion Hills Golf Club on Tuesday, the superintendent was asked about the integrity of hiring family members to work in the district.

He responded that he never intended on hiring Smith.

"I was never going to hire my uncle," he said. "The reason why I did that is because I knew that someone was leaking information, illegal information."

The superintendent also said there was nothing illegal about the hire itself. He then said he told Smith to include their personal connection on the resume submitted to the district.

After Hickman's speech Tuesday, in an interview with The Dispatch, he contradicted his previous statement, saying he was, in fact, aiming to hire Smith when he recommended him to the board.

He was asked to clarify his statements to the Columbus Rotary Club about never intending to hire Smith.

"I wanted to inquire whether or not there was a leak in the office," he responded.

He was then asked why district personnel talking about CMSD would be an issue.

During his speech Tuesday, Hickman was also questioned about the CMSD board hiring his wife, Adilah Zalzala, to be a special education teacher at Fairview Elementary for $42,000.

"When you talk about hiring my wife, every superintendent has hired their wife, uncle, cousin," he said.

"My wife has two masters' degrees in special education," he said, adding that a position was open and his wife was qualified.

A member of the audience then told Hickman it was his understanding the position was not open to anyone but Zalzala. Hickman denied that that was the case.

"It was open to everyone," the superintendent said. "It's been a position that has been open for two years. See, that's what I'm saying with facts, people don't know the facts."